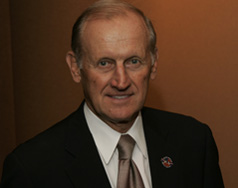 During testimony at the bi-state agency’s Board of Commissioners meeting in Manhattan last week, Anderson said, “The Port Authority’s ten-year capital plan is a fundamental re-affirmation of the agency’s core mission to build and maintain the transportation infrastructure that sustains the world’s largest metropolitan economy.

“With $12.6 billion devoted to state-of-good repair, the Port Authority has shown its dedication to maintaining its existing assets.

“Even more impressive, however, is the agency’s willingness to devote more than half of its $27.6 billion capital plan to major new projects, including redeveloping its three regional airports to accommodate 21st Century travel and rebuilding the Bayonne and Goethals Bridges.”

The NYBC president said the capital plan — which covers 2014 through 2023 — marks a key period of transition for the 93-year-old agency.

With its work at the World Trade Center nearing completion, the Port Authority is using the capital plan to re-focus on its role as a builder of regional transportation infrastructure.

“The Building Congress is especially gratified to see the Port Authority’s commitment to improving the region’s three major airports, rebuilding its bridges and creating a more efficient and expansive PATH system,” Anderson added.

According to the Port Authority, the ten-year capital spending plan will result in 126,000 total job years and $29 billion in economic activity.

Janis shining the spotlight on goals of PWC