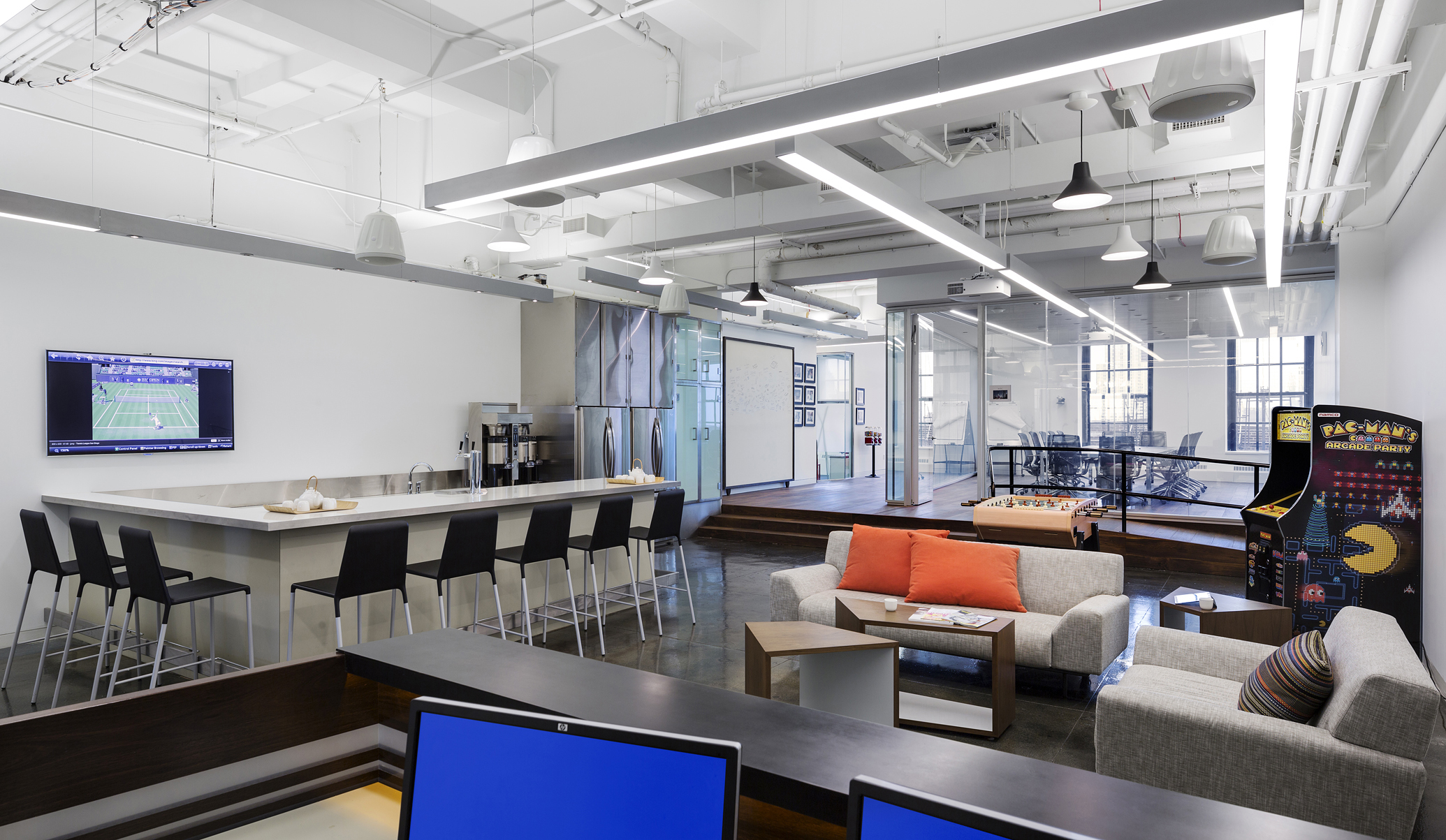 ● MADGI
Getting creatvie with corporate interiors 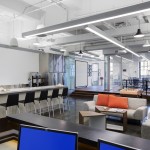 The commercial interiors studio of the New York City-based architecture and interior design firm of Montroy Andersen DeMarco (MADGI) has completed the 35,000 S/F headquarters of Dentsu Americas, one of the world’s largest advertising, marketing communications, and media buying networks.
The new headquarters office is located on the 25th and part of the 24th floor of 32 Avenue of the Americas.
Steven Andersen, MADGI’s principal and head of the firm’s commercial studio, said Dentsu came to MADGI to design their North and South American headquarters following the successful completion of previous projects in the same building for five of its subsidiaries.
The client already occupied the 16th floor in the building and decided to expand to the 25th floor and share public areas with its subsidiary, IgnitionOne.
This challenged the architectural team to create a multi-faceted design that married a traditional, Japanese-inspired corporate environment with a less formal one that appealed to the firm’s creative personnel.
Andersen said that due to an accelerated design and construction schedule, the design was conceived prior to the demolition of the previous office space that had been there.

Parsons Brinckerhoff has been awarded a contract to perform conceptual design and related environmental services for the I-278/Route 1 & 9 interchange ramps in Union County, New Jersey.
The project is being undertaken by the Port Authority of New York & New Jersey in co-operation with the New Jersey Department of Transportation, the Federal Highway Administration (FHWA), and the cities of Elizabeth and Linden.
The project involves traffic studies, travel forecasting and modeling, concept development, environmental investigations, and extensive stakeholder and public coordination.
The intent of the project is to prepare an environmental assessment to be approved by the FHWA so it can be advanced to the preliminary and final design phases.
The proposed project would add two ramps to the existing interchange of I-278 at US Route 1&9. One ramp would connect westbound I-278 with northbound US Route 1&9 and the other would connect southbound US Route 1&9 with eastbound I-278.
These changes potentially require a new bridge to be constructed over US Route 1&9 and, with changes in traffic patterns, it is anticipated that some additional roadway improvements would be required along the US Route 1&9 corridor between Bayway Circle and the improved interchange with I-278.
Parsons Brinckerhoff performed a preliminary study for this project as part of an environmental impact statement it prepared for the Goethals Bridge.
Conceptual designs of a preferred alternative and an environmental assessment for the new interchange ramps will be completed in late 2015.

Urban Land Institute New York hosted a program entitled “NY2020: The Future of the Manhattan Skyline,” at Wilkhahn Showroom in New York City.
Lynne B. Sagalyn, Professor of Real Estate at Columbia Business School, moderated a panel of developers, architects and urbanists, including Jeff Dvorett of Extell Development Company; Alexander Garvin, AGA Public Realm Strategists; Erik Horvat, World Trade Center Redevelopment, Port Authority of New York and New Jersey; Marianne Kwok, Kohn Pedersen Fox; and Michael M. Samuelian, Related Companies.
Panelists examined the value of the evolving New York City skyline and the impact projects like Hudson Yards, One 57 and the World Trade Center Complex will have on the City’s future.
According to the panelists, mixed-use districts, such as Hudson Yards, will offer greater neighborhood planning opportunities than a single building or structure and will benefit from additions to existing infrastructure.