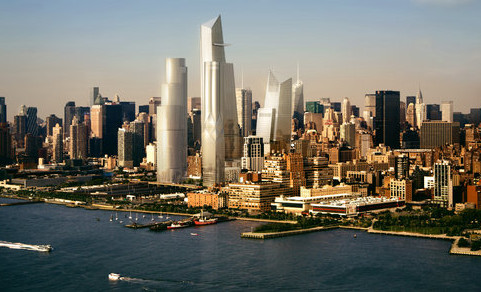 By Louise Hohorst and Blake Niehaus,

But unless you happen to be a titan of the commercial real estate industry with the budget to match, you’re probably wondering, “What can I do to get in on all of this with my budget?”

Often called a “wasteland” by New Yorkers, the neighborhood surrounding the Jacob Javits Convention Center was best described as a scattering of storage facilities, vacant lots and body shops — largely due to the lack of any infrastructure that would make pedestrian foot traffic possible.

However, the Hudson Yards development is soon to eliminate this limitation thanks to several critical extensions to the 7 Train, Amtrak lines and the Highline, all of which are underway.

Of the three, the High Line’s third and final phase is expected to open as early as late this year. It will loop around Hudson Yards as it turns to the Hudson River at West 30th Street, culminating at 12th Avenue and West 34th Street.

As early as next spring, the enhancement is potentially expected to deliver 40,000 people a day across West 30th Street and up 12th Avenue — still primarily a construction zone in an under commercialized area.

These additions ensure greater access, visibility and bolstered tourism to the Hudson Yards site, but they should also be a starting gun for smaller commercial real estate owners in the area who have a once-in-a-lifetime opportunity to immediately take advantage of streams of new pedestrian traffic as early as next spring if they are able to pivot quickly and creatively to meet consumer needs.

Surprising low cost opportunity for acquisition investments in Hudson Yards before demand comes into full swing
While the neighborhood is currently growing at five times the rate of the rest of Manhattan, smaller developers and owner-operators are far from priced out of the neighborhood, according to James Nelson, partner at Massey Knakal Realty Services.
“Hudson Yards is currently trading at a discount to other established neighborhoods ($300-400s/bsf compared to $800s+),” noteed Nelson. “So there is considerable investment opportunity.”

Until now the Hudson Yards district has been a back closet to its popular neighbors Chelsea, Hell’s Kitchen and Midtown.
However with permanent upgrades to the urban landscape that will also include a $75 million commission by designer and architect Thomas Heatherwick to create a new iconic monument for New York City, a multi-use, expanding “Culture Shed” and a partnership with New York University’s Center for Urban Science and Progress to make the first “quantified community” there is likely not a better neighborhood to acquire property for investment purposes, particularly at those prices.
Unlike virtually any other developing area a developer might see in her lifetime, the promise of high traffic in this neighborhood is truly guaranteed.

Bridge lenders to fill funding void for small developments and acquisitions
Unlike the large projects of Hudson Yards, which attract the attention of large capital sources as well as well-capitalized sponsors, smaller acquisitions or development projects share none of the benefits that high-end developments receive in terms of funding.
Hedge funds and large banks refrain from financing smaller projects because they see it as too management intensive.
Most often, bridge lenders are the only practical solution to step into this funding role for small developments by offering loans when quality sponsors struggle to get bank financing.

“Bridge lenders finance smaller $1-10 million deals like this all the time- in fact- its all we do because there is such a great need for it. We are specialized to finance these types of deals, so our job is to provide our clients with a quick, efficient and transparent financing option that allows them to get their project off the ground,” said Adam Luysterboghs of bridge lending firm Avant Capital Partners.

“With Hudson Yards, all one has to do is look at the rising rent and condo prices in the neighborhood to understand that redevelopment of the smaller properties is more than viable but inevitable and, therefore ,a great investment for lenders like us who would like to help those local CRE owners in the area get to the next step in the development of a neighborhood they’ve been in for years.”

Durst gets $410M square deal for his ‘pyramid’ building