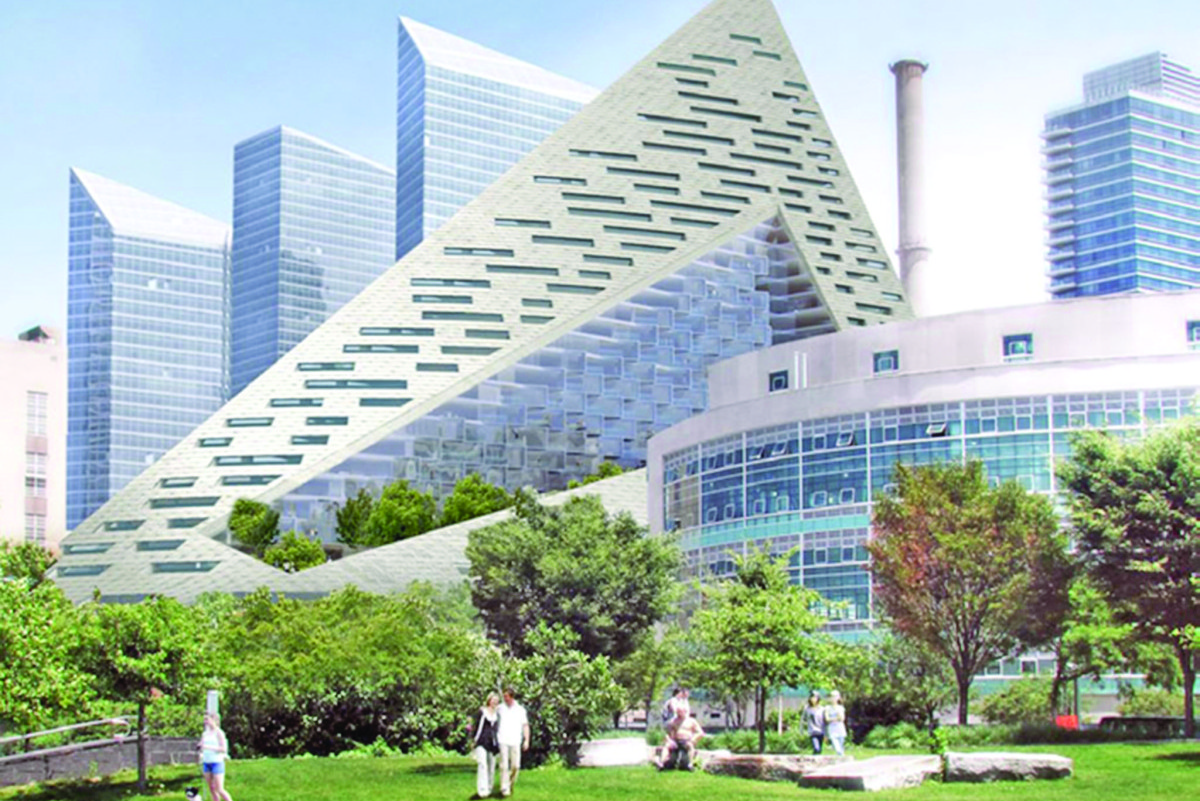 Durst gets $410M square deal for his ‘pyramid’ building

The Durst Organization celebrated the topping of its tetrahedron at 625 West 57th Street by closing on a $411.5 million construction loan.

The loan carries a term of four years with a one-year extension option.

The deal came as a final bucket of structural cement was hoisted to the top of the 450 ft. tall building to mark the completion of the superstructure and the beginning of the final phase of construction.

“When we first designed this building a lot of people told us that it couldn’t be built,” said Jonathan (Jody) Durst, president of The Durst Organization.

“The naysayers said it was too complex and that the trades could never get the job done. We knew better. Despite its complex and unique form we had faith in our design team and knew that the New York construction trades were up to the task. And for their hard work and professionalism, we are profoundly grateful.”

The 709-unit rental building designed by BIG- Bjarke Ingels Group has a unique tetrahedron design and is one of the most architecturally distinctive buildings ever constructed in New York City.

West 57th Street project is a hybrid between the European perimeter block and a traditional Manhattan high-rise development.

The building’s shape combines the advantages of both: the compactness and efficiency of a courtyard building providing density, a sense of intimacy and with the airiness and the expansive views of a skyscraper. The form of the building shifts depending on the viewer’s vantage point.

While appearing like a pyramid from the West Side Highway, it turns into a dramatic glass spire from West 58th Street.

The courtyard, which is inspired by both the classic Copenhagen urban oasis and Central Park, can be seen from the street and serves to visually extend the adjacent greenery of the Hudson River Park into the West 57th development.

The slope of the building allows for a transition in scale between the riverfront and the high-rise residential towers to the north of the site.

The highly visible sloping roof is perforated by terraces — each one different.

Every apartment gets a bay window designed to allow for maximum privacy, views of the courtyard or an unobstructed stretch of the river.
Sustainable features include heat recovery for exhaust and outside air systems; rainwater collection for cooling tower make-up and irrigation;

Use of The Helena’s surplus treated water for cooling tower make-up and irrigation; Radiant heat in public areas; VFD (variable frequency drive) motors for all pumps, fans; Garage ventilation on CO metered system and; Hybrid heat pumps, which have high EER and uses less energy in the heating season.