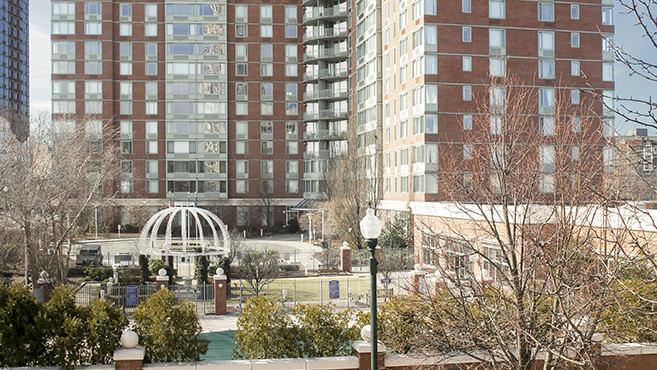 HFF marketed the property exclusively on behalf of the seller, a Hartz Mountain entity listed as 255 Huguenot Street, Corp.  The DSF Group purchased the asset free and clear of existing debt.

La Rochelle comprises 43 studio, 142 one-bedroom, 185 two-bedroom and 42 three-bedroom units, including loft-style apartments and penthouse suites.  The property also has approximately 6,000 square feet of ground-floor retail, a 422-space parking garage and rights for the development of an additional 40-story residential tower

It is located at 255 Huguenot Street in downtown New Rochelle adjacent to the New Rochelle Transit Station, which provides Metro North and Amtrak service to New York City.

DSF already owns Halstead New Rochelle, around the corner at 40 Memorial Highway. According to the Westchester County Business Journal,  DSF paid $210.4 million for the Halstead, a 588-unit, 40-story tower, in 2013.

The website reported that New Rochelle Industrial Development Agency approved the La Rochelle sale at a public meeting on Aug. 30. The IDA controls the land and had granted tax exemptions and benefits to AvalonBay.

“The IDA approved a mortgage recording tax exemption for DSF, estimated at $400,009, based on the expected amount of new debt. The agency also released Hartz Mountain from its obligations under a lease with the IDA and consented to the assignment of Hartz’s lease to DSF. A 30-year payment in lieu of taxes agreement remains in effect,” reported the business journal.

The city and IDA will receive about $1.5 million in transaction fees and a percentage of additional debt that DSF takes on to finance renovations, according to City Manager Charles Strome.

DSF plans to renovate apartments as they become available and make upgrades throughout the building.

“We are thrilled to expand our presence in the New Rochelle submarket after having already enjoyed tremendous success in the market with the purchase of the adjacent 588-unit, 40-story Halstead New Rochelle property,” said DSF Group president Josh Solomon.

Broker Jose Cruz added, “The DSF Group saw significant upside in the tower and the local market. Multifamily assets continue to attract core and core plus capital to urban markets within the New York area.”

Since 2000, The DSF Group has invested more than $2.5 billion in five million square feet of multifamily real estate and has quietly become one of the most successful private real estate investment firms in the country.