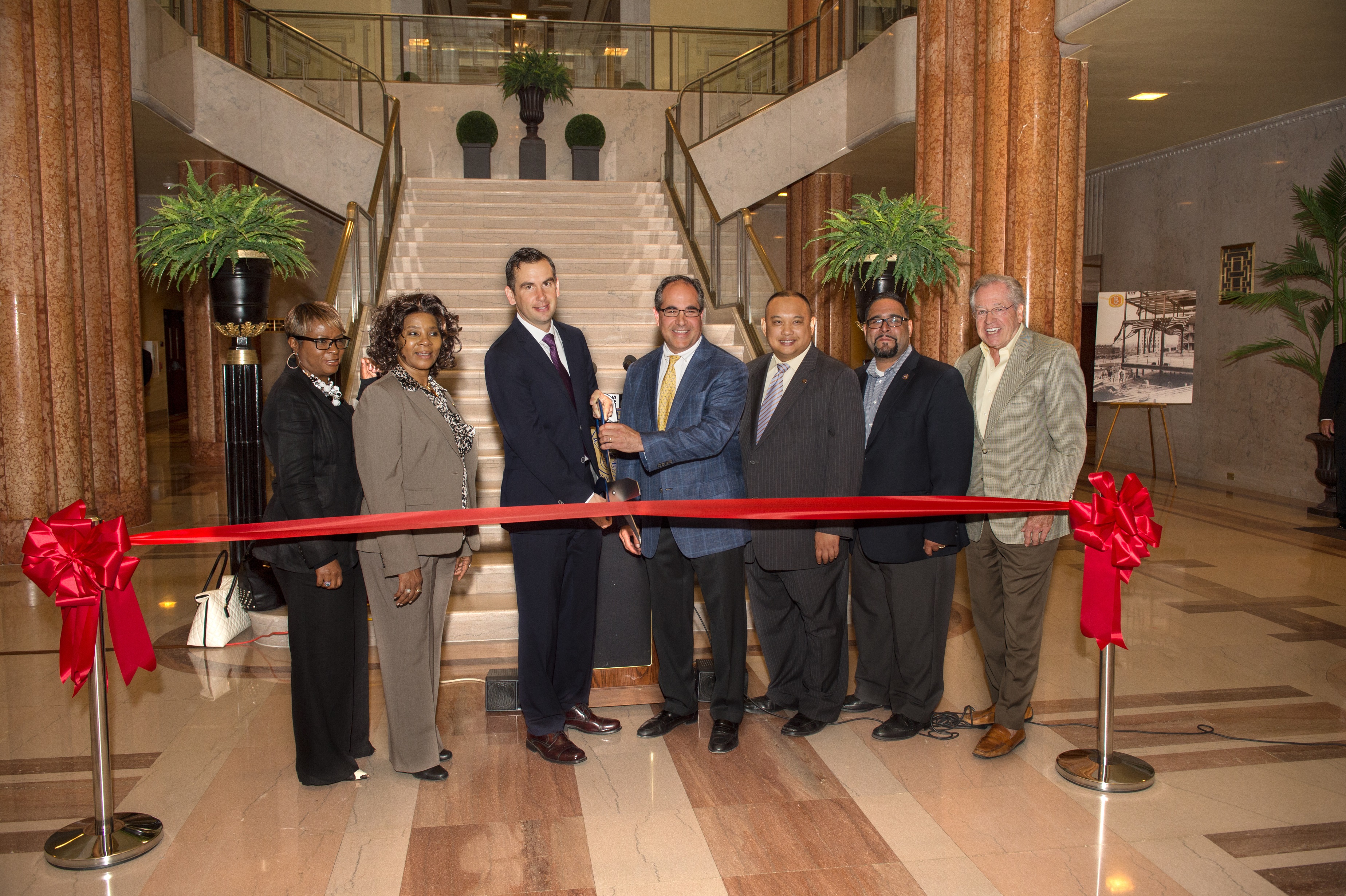 Standing in an ornate, Art Deco lobby in front of a two-story marble staircase that hearkens back to a gilded age of design, Mayor Steven Fulop and fellow Jersey City officials joined the development partnership of Building and Land Technology (BLT) and Metrovest on May 28 to cut a ceremonial ribbon on The Paramount, one of the region’s most unique and architecturally-significant residential properties.

The ribbon cutting marked the official Grand Opening of The Paramount, a 23-story, 231-unit luxury rental building located within The Beacon, a collection of 10 1930s-era buildings that are being restored and transformed into luxury residential properties.

“This is one of the most significant restoration projects in the entire country,” Mayor Fulop said. “When you look at the historic structures here at The Beacon as a whole, they are magnificent, and when it was added to the Historic Register, it put limitations on what changes could be made to the buildings. It was important to both the BLT family and Jersey City to keep the aesthetics clean, pristine, and symbolic of our past, but at the same time recognize the city’s future. And that is exactly what we have here.”

Although May 28 was the official Grand Opening ceremony, the building opened to the public three months beforehand and is already nearly 50 percent leased.

“This is the third conversion we have completed at The Beacon in the last 30 months, with over 500 new rental residences and dramatic amenity spaces brought to market over that time period,” said Paul Kuehner, President of BLT. “The first two buildings are 95 percent leased and occupied, and The Paramount, which is the crown jewel of The Beacon, is well on its way. This could only happen with the support of the community and the City of Jersey City.”

Previously sought out as the location for numerous movies due to its unique Art Deco spaces, including Titanic and Quiz Show, The Paramount’s lobby has been restored to its original 1930s grandeur.  Accessed through an octagonal vestibule, the lobby features ac double-height space dominated by 12 marble columns and a grand stairwell of white and gray marble with silver and bronze handrails that leads to a mezzanine level also trimmed in marble.

Blending  with The Paramount’s historic restored spaces is a collection of new studio, one- and two-bedroom residences with monthly rents starting at $1,700.  Immediate occupancy is available.

Residents of The Paramount also enjoy a private amenity offering, including a fitness center with state-of-the-art Cybex equipment, separate yoga room, lounge area, and restrooms with lockers and showers.  A Clubroom on the first level features multiple lounge areas, a projection screen TV and WiFi, while additional lounge areas with WiFi and seating are found on the mezzanine level.  On the 19th floor, a sunroom/conservatory with outdoor furnished terrace offers stunning views of the Manhattan skyline and Statue of Liberty.

The Beacon offers residents proximity to Jersey City’s vibrant downtown district which is celebrated for its comprehensive public transportation system, including numerous NY Waterway Ferry terminals and PATH stations offering convenient service into Manhattan, as well as NJ Transit Light Rail and accessibility to the Holland and Lincoln Tunnels and the New Jersey Turnpike.  The area is also known for its active artist’s community, growing music scene, and ever-improving shopping, dining and nightlife venues.

Scaffold Law: The Myth vs. the Reality