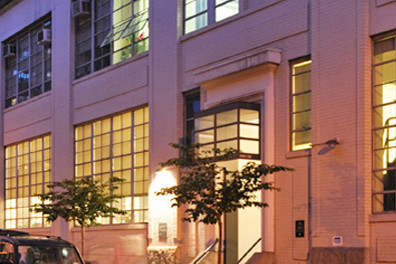 With a display worthy of its location three blocks from the new Whitney Museum and the High Line,  The William Kaufman Organization (WKO) has launched a publicly-accessible art gallery within its 2 Gansevoort Street office building in the Meatpacking District.

An immersive contemporary art exhibition is located inside the lobby of the landmarked, nine-story office property, situated at the intersection of West 13th, Horatio and Gansevoort Streets.

Upon entering the lobby, which is open to the general public, guests encounter a floor-to-ceiling, seven by 12 ft illuminated art portal on the sides of the entrance and on the ceiling, as well as an 18 by 11 ft. panel behind the lobby desk. This configuration will allow visitors to visually immerse themselves in outdoor locales.

Hamburg-based independent photographer and artist Kevin McElvaney, who has shown his work internationally and is renowned for the “RefugeeCameras” project featured in VICE and The Atlantic, is the inaugural artist in what will be a rotating series of exhibitions of art that will be displayed in the gallery.

According to WKO CEO Jonathan Kaufman Iger, the real estate operator who is also the chairman of the Meatpacking District BID Board of Directors, the Gallery at 2 Gansevoort is meant to serve as a natural outgrowth and extension of the neighborhood’s cultural amenities.

“Our hope is that the Gallery at 2 Gansevoort will quickly become a “must-see” destination in its own right for those going to and from the Whitney, as well as others who are visiting the Meatpacking District on any given day,” he said.  “We expect to open more people’s eyes to contemporary photography by displaying it in such an unorthodox and progressive space.”

Hamburg-based global art collective DerbeLight and architecture firm Fogarty Finger worked with WKO to design and reimagine the existing lobby space at 2 Gansevoort, which will display photography by contemporary artists on a rotating, six-month schedule. The ultra-high-resolution photographs are printed on a stretched white fabric and backlit by massive LED lightboxes mounted on the walls.

According to Iger, the exhibition also pays homage to the company’s longtime roots of integrating art into real estate. The company developed their first class-A commercial office building at 711 Third Avenue in the early 1950s, commissioning a mosaic mural designed by artist Hans Hoffman that encompassed the entire elevator core of the lobby, which is still on view today. WKO is also known for two iconic sculptures in the plaza areas of 777 Third Avenue: the “Big Red Swing,” an interactive pop-art sculpture by artist Theodore Ceraldi and “Contrappunto,” a rotating stainless-steel sculpture at the front entrance by Brooklyn-based artist Beverly Pepper.

Built in 1912 and originally designed as a warehouse and trade school, the 210,000 s/f 2 Gansevoort was acquired by the William Kaufman Organization in 1948. Current tenants include Theory, Ennead Architects, and Coronado Biosciences.