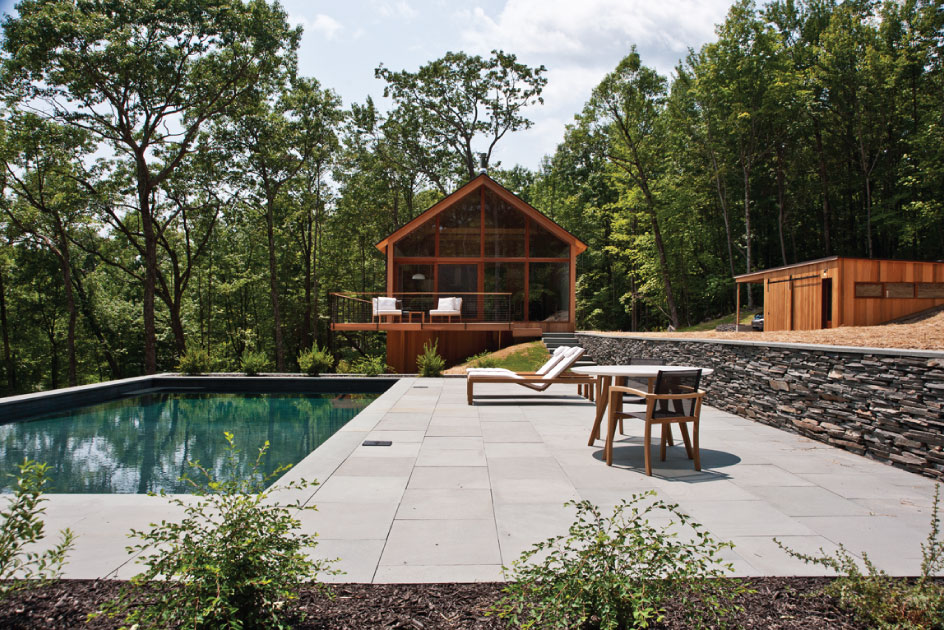 For many people, the Catskills are where Baby Houseman found love for the first time on a summer getaway with her family in the 1960s, in a love story immortalized in the 1987 film Dirty Dancing.

The once-popular area of small towns in the scenic Catskills Mountains, faded in the years following the golden era of summer resort living, with the rise of the suburbs, air-conditioning and the booming airplane travel industry said to have contributed to the decline.

Once colloquially referred to as the “Borscht Belt” and the “Jewish Alps,” popular resorts like Grossinger’s and The Concord were a one-stop-shop where families could spend three months enjoying a variety of activities while staying in one place.

But one development company is trying to turn the tide — not to revamp the long-abandoned summer resort industry — but instead cashing in on the trend of young couples, and creatives that are moving to the area and buying summer homes there in droves.

Hudson Woods is a small master-planned neighborhood about 100 miles from NYC in the Hudson Valley, where 26 homes will be built over 131 acres.

“What distinguishes the homes, is that they are imbedded in nature in many ways,” said Drew Lang,

architect at Hudson Woods. “They’re built into the natural landscape and they incorporate natural materials and vernacular architectural forms, and they’re very high-performing homes, with high quality materials and craftsmanship.”

So far, buyers of the homes are entirely made up of New Yorkers – Manhattan and Brooklyn residents – that for the most part are buying the pads as second homes.

“They’re set up for year-round use should someone want to inhabit these homes in that fashion,” said Lang. “One of the great appeals of the area is that it’s a beautiful place to be year-round.”
Pricing for the homes starts at $765,000 for a house with three bedrooms, two-baths, a garage/studio, and an outdoor deck, among other features.

The lots average five acres, and square footage can change if a buyer opts to get upgrades – like an extra bedroom or third floor option, or even a guest home or pool house.

The concept of Hudson Woods came from Lang’s brainstorming on second home offerings for city residents, and “observing and interacting with my peers, and my clients over time, and feeling the restlessness of people living in the city.

“There’s an inability to relax and a limited availability to connect with people,” said Lang of city living. “What we find when we go outside the city, is that it’s easy to relax and connect with nature and family and friends. I sensed for a long time a void in being able to do that without a tremendous amount of energy and money, and most people don’t have time, energy or money.”

“We sense a surge of energy and interest in the area, I think that it’s not just because we have a lot of people coming to see us,” said Lang, who reported that the company has had more than 800 inquiries about the homes.

“It’s what we see in the area in the way that young, energetic, creative and entrepreneurial people are doing interesting things,” said Lang. “There’s a lot going on, and I think we’ll continue to see that.

“You can get a lot for you money in this area, so that was one of our objectives when we set out to do this project – to do something high-quality and very highly-designed, and at a price that was going to be accessible to a lot of people.”

Iconic musician and artist Patti Smith, who rose to fame while living in gritty 1970’s New York City, even name-dropped one Hudson Valley town when she told the audience at a panel discussion at Cooper Union in 2010 about whether NYC was a viable place for young artists to find success: “New York has closed itself off to the young and the struggling. But there are other cities. Detroit. Poughkeepsie. New York City has been taken away from you. So my advice is: Find a new city.”

In 2011, The New York Times called the town of Millerton, in Dutchess County, “Williamsburg on the Hudson” in an article about the growing “exurban revival” in riverside towns in the Hudson River Valley.

One area builder, Catskill Farms, bills its country cottages and farmhouses on its website as “less than the cost of a NYC parking spot.” Homes listed for sale on the company’s site range from $385,000 to $437,000.

The gambling industry is also poised to bring in more tourists and give a shot of life into one town that went into decline following the shuttering of The Concord, once one of the biggest resorts in the Catskills.

In December, the Gaming Facility Location Board announced that Montreign Resort Casino will be built on the old grounds of The Concord Resort Hotel in Thompson, New York.

It will include a 391-room hotel, golf course, restaurants, and entertainment room. Developed by Empire Resorts, the resort-hotel is projected to cost $630 million.