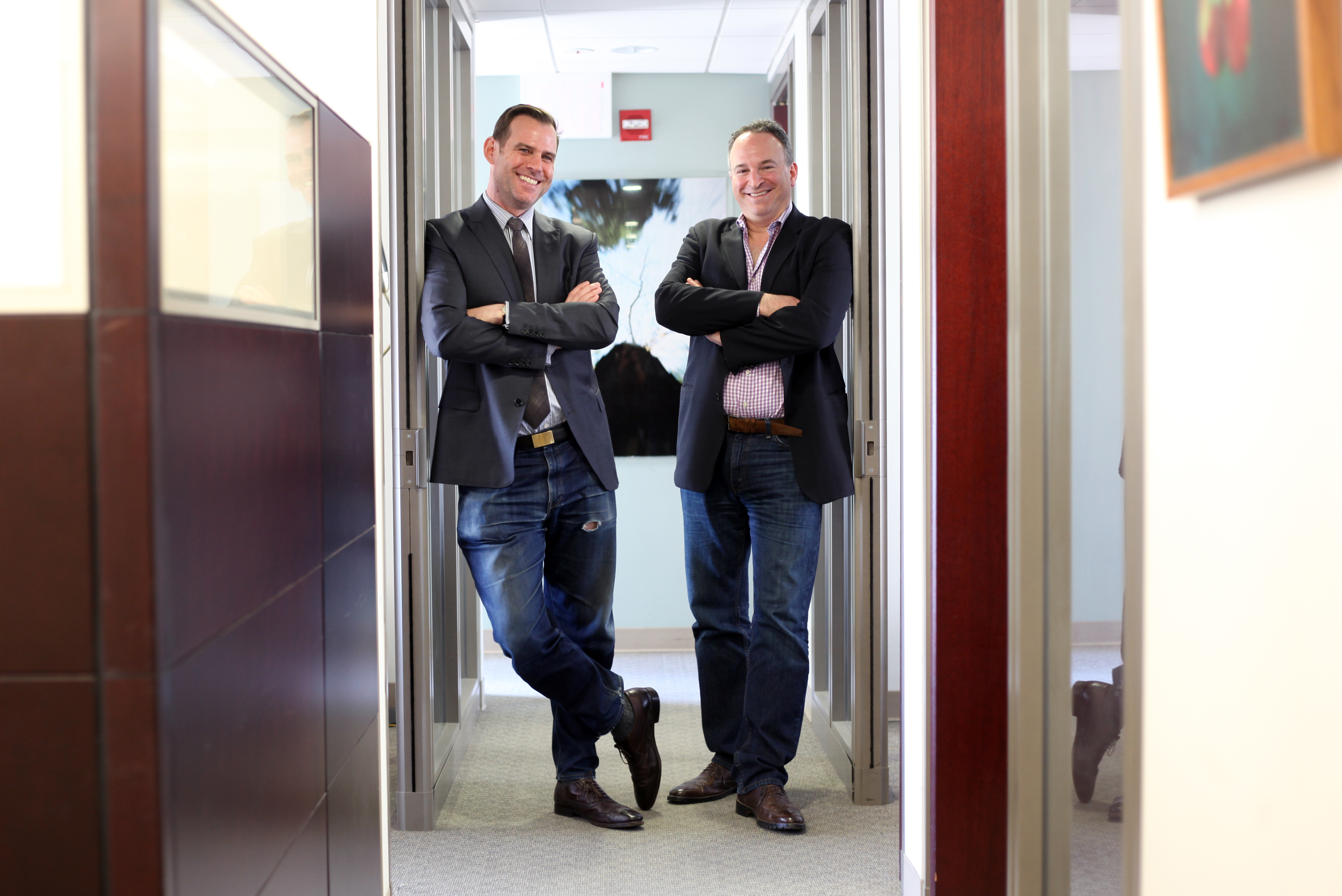 Partners seek those in pursuit of happiness

In a midtown high-rise a block from Grand Central, Larry Link and Michael Greenberg show off their glass-walled offices that face one another’s across a narrow hallway.

“We’re literally screaming over at each other every day,” laughed Greenberg. But they’re not angry – it’s just part of their rapport.

The two are as complimentary to each other as they are friendly, even gamely climbing through a window to take photographs on the narrow balcony outside their offices.

The kindred spirits run Level Group, a growing brokerage firm that does residential and commercial sales and leasing, and credits itself as the first firm in New York City to offer a 100 percent commission fee for brokers.

“We started out as business partners working together and have become the best of friends,” said Greenberg, CEO and general counsel of the firm. “Even when we’re not in the office, we’re constantly texting each other. Larry sends me funny photos of his dog.”

Link’s dog, Toshi, a white-grey Schnauzer, is a constant presence at the firm’s office and has become something of a mascot at the company. The pup even has its own Instagram account.

The partnership between Link and Greenberg formed nearly 10 years ago, when they met as Level Group was still in its early phase.

Link, president of Level Group, is an Indiana native, and moved to New York City in 1991 to work for Merrill Lynch as a real estate investment banker. A graduate of Indiana University, he was in the honors program and studied business finance, eventually graduating as valedictorian of the program.

While at Merrill Lynch, Link won a number of awards and was the Analyst of the Year two years in a row. He was involved in several pivotal deals, including transactions involving Kimco Realty, Sam Zell’s Equity Group, manufactured home communities, and REITS, worth billions of dollars.

“I got to know real estate on a very institutional scale,” said Link. Always looking to challenge himself, Link moved to UBS in securities after three years at Merrill Lynch, and was a manager of a distressed property debt fund, focusing on distressed debt investments.

He left the banking world for a year and a half to travel the world – visiting 25 countries in 10 months, including the Middle East, Africa, India, Nepal, and “every country in southeast Asia.”

That wanderlust led to a lifelong love affair with photography, and when he returned to NYC, Link began a new career as a commercial photographer. Working primarily in the fashion industry, he spent 10 years photographing models all over the world.

“It sounds more glamorous than it was, in many ways,” said Link.

He got his real estate license on a dare from an “old sage” broker, who worked at a small firm in Greenpoint, Brooklyn, where Link has called home for many years. He learned the ropes of brokerage from his mentor, eventually moving on to join Level Group in 2006, which was then a young company.
Shortly after joining, Link and Greenberg orchestrated a buyout of the other two partners at the firm, and became 50/50 partners in Level Group.

Greenberg, a Long Island native, studied the humanities at Wesleyan University in Connecticut, a major that eventually led him to study abroad in Florence, Italy.

“I think that’s when I first fell in love with real estate,” he said. “It’s hard to spend time there without appreciating the thought and the effort that went into designing that city, that really forces you to be conscious of architecture, city planning, quality of construction – it’s really the epitome of so many of these things.” Greenberg went on to law school at Boston University after getting his undergraduate degree, and struggled to find a job during the recession of the early 1990’s.

He ended up moving to Philadelphia with his then-girlfriend, who later became his wife, where he eventually ended up Drinker Biddle & Reath LLP, one of the city’s top law firms, working under Harry Cherken who was an important mentor in his life.

“He was the head of real estate there and was very entrepreneurial himself,” said Greenberg. “He simultaneously taught me most of what I know about business and real estate, and sparked a real interest in business with me.”

After moving to NYC, Greenberg worked at Herrick Feinstein for six years, and then in 2004, left the firm with two other lawyers and formed a law firm and Level Group.

“We were all interested in real estate law, but also interested in business,” said Greenberg. “We thought real estate brokerage was something we’d all enjoy and be good at, and had heard the field was poorly run, had low ethics, and brokers weren’t appreciated. So we decided to form a firm that’s very broker-centric with high ethical standards.”

Two years after forming Level Group, the company restructured, and Greenberg’s former partners left to do other things. That’s when Greenberg and Link took the reins.

Now over 10 years old, the firm has more than 160 agents. It still has a 100 percent commission structure, which gives agents the full commission from a deal, minus a smaller transaction fee.
Though the firm originally started out focused on the residential side of the business, in the last five years the company has rapidly grown its commercial division.

“My experience in investment banking and Mike’s in law, meant that we had experience with commercial transactions,” said Link. “It was a natural transition to do commercial activity. There are a lot more specialized types of things you need to know in order to excel in commercial, so our backgrounds were perfect for the transition into commercial.”

The pair is looking to grow their company, but are looking at quality over quantity.

“We’d like to get bigger, but with intelligence,” said Greenberg. “We’re focusing on quality growth – not just agent growth, but the right agents, people that take us seriously, people that love to improve their skills and already have high skills.”

The team is also looking to grow the breadth of its commercial division to include everything from retail to investment sales, and on the residential side, get into more new development projects.
For Link and Greenberg, the success of their company always comes back to their success as friends.
Link got married last year and lives in Brooklyn with his wife, while Greenberg lives in Scarsdale with his wife and three children.

But they spend most of their work day together.

“We’ve gone to lunch together almost every day for the last eight years,” said Greenberg. “We’ve had thousands of lunches. And during those lunches we realized we have complimentary personalities and skill sets, and over the years, we’ve learned to harness those effectively, for the growth of the business, and for the benefit of clients and agents.

“I think that the chemistry and the respect that we have for each other, has made us much better partners and a very strong business,” said Greenberg. “And it benefits everyone around us – we have a very happy office.”

“It’s the kind of thing we didn’t understand fully until we got an outside perspective from people from other firms that would make offhand comments about how it’s the happiest office,” said Link.