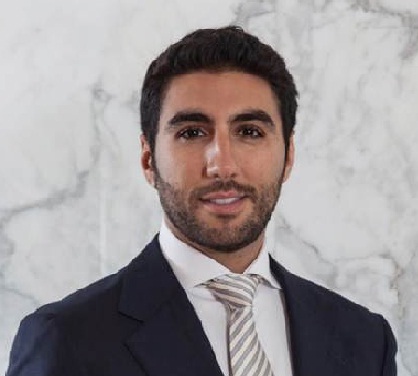 Real estate scion Matt Moinian is stepping out his father’s shadow with the launch of his first solo project since joining the family business.

The 29-year-old senior vice president at the Moinian Group — a firm founded by Joseph Moinian in 1982 that today owns and operates a portfolio in excess of 20 million square feet of assets valued at $10 billion across the U.S. — will open the boutique Hotel Hugo on the corner of Spring and Greenwich in Soho next month.

Matt likens the property to a “mini-Mercer,” the trendy Andre Balazs-developed hotel on the corner of Mercer and Prince Streets.

The 122-room jewel box will have a ground-floor restaurant and a rooftop bar. He’s tight-lipped about the restaurant details and the name of the chef who will helm the operation. But he’s effusive about the team he worked with to develop the project.

Matt purchased the site three years ago — just a few days after he graduated from Cardozo School of Law at Yeshiva University — in a joint venture with his uncle, Morris Moinian, of Fortuna Realty, for $12.75 million.

Then he formed a small development team to work on the hotel and other smaller ventures he operates outwith the boundaries of the Moinian Group proper.

Morris Moinian told Hotels magazine in November that Hotel Hugo was “pretty much made in Italy,” with Italian stones, millwork, stainless steel and a limestone façade.

“It was very expensive to build … I am very pleased and have received great comments about the name. It will attract high-end travelers, and ADR will be comparable to other SoHo boutiques, like the Mercer and SoHo Grand in the mid-$400s.”

Matt agreed with the pedigree of the project, adding, “These are things we wouldn’t be able to do if I didn’t set up this task force of people to do it with me, just because we have so much else going on with our flagship properties.”

Indeed, the eldest of the five Moinian children, Matt is also heavily involved in the firm’s current big projects, including 3 Hudson Boulevard, the 1,000 ft. office tower to be built in the Hudson Yards, and the 60-story luxury rental building at 605 West 42nd Street, next door to the Moinian-built Atelier, that will have 1,174 units when it opens in 2015.

An NYU economics graduate currently studying for his MBA at Stern School of Business, Matt believes he would have been a scholar of the arts had he not joined the family business, a choice, he said, his father never pressured him to make.

“The whole family is very progressive and very open,” he said. “They were willing to support almost anything I’d want to do professionally.”

A memory that made an impression on him was visiting a construction site at the age of 12 and seeing a dilapidated building still in the early stages of development and then, two years later, walking into the same building and seeing people live there.

“It was a colorful experience in my childhood and I thought, this is what I want to do,” he said.

In his late teens, Matt worked as an assistant superintendent during construction of the Moinian Group’s luxury rental building The Marc on West 54th Street. “That was very valuable,” he said. “You have to learn from the ground up.”

After graduating NYU, he was a project manager at the Moinian Group’s W Hotel and Residences in the Financial District, an experience he called his first professional immersion into development.

“That was a great experience, too, and it taught me a lot,” he said. “It’s one of the most beautiful buildings we’ve ever built. It was difficult — the more beautiful you make it, the more difficult it is.”

In his “scarce” free time, Matt spends time in the gym and is passionate about traveling, citing Moscow and Shanghai as recent favorite destinations.

“I love traveling, my family’s done it forever,” he said. “It’s what got me into wanting to build hotels.”

Family is important to Moinian — Friday dinners are mandatory for all Moinians and, along with his siblings (including younger brother Mitch, a Senior Vice President of the Moinian Group) the clan gathers for dinner once a week at a family member’s home in Manhattan or Long Island.

Matt said he appreciates that he has big shoes to fill down the road some day, but confessed that it’s not something he thinks about too much.

“My father comes in to the office every day, not for glory, not for financial reasons, he honestly and legitimately comes here because it stimulates him and he enjoys it, every part of it,” he said.