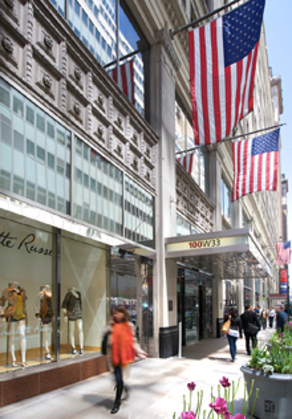 The company will move into its new office in July, significantly expanding from its previous 12,500-s/f space at 129 West 29th Street. When the planned move was first reported in 2013, Vornado executives said Rocket Fuel would lease a mere 50,000 s/f.

Rocket Fuel has grown rapidly over the past year. The California-based company, which places ads online using “artificial intelligence”, has quadrupled its office space at six locations in the past six months. Its current 710 employees mark an 87-percent increase over last year.

Current office tenants in 100 West 33rd Street include clothing company Polo Ralph Lauren and ad agency FCB, according to Vornado’s website. The lower levels in the 1-million s/f building are occupied by the Manhattan Mall.

“Rocket Fuel definitely wanted to stay in the Midtown/Chelsea area as this is where most of its customers and partners are located,” Rocket Fuel’s director of real estate and facilities Kirk Thompson told Real Estate Weekly.

“The Rocket Fuel company culture is extremely collaborative and there is tremendous collaboration between multiple functions all the time. The full-floor at 100 W 33rd Street is extremely efficient and allows for expansion.”