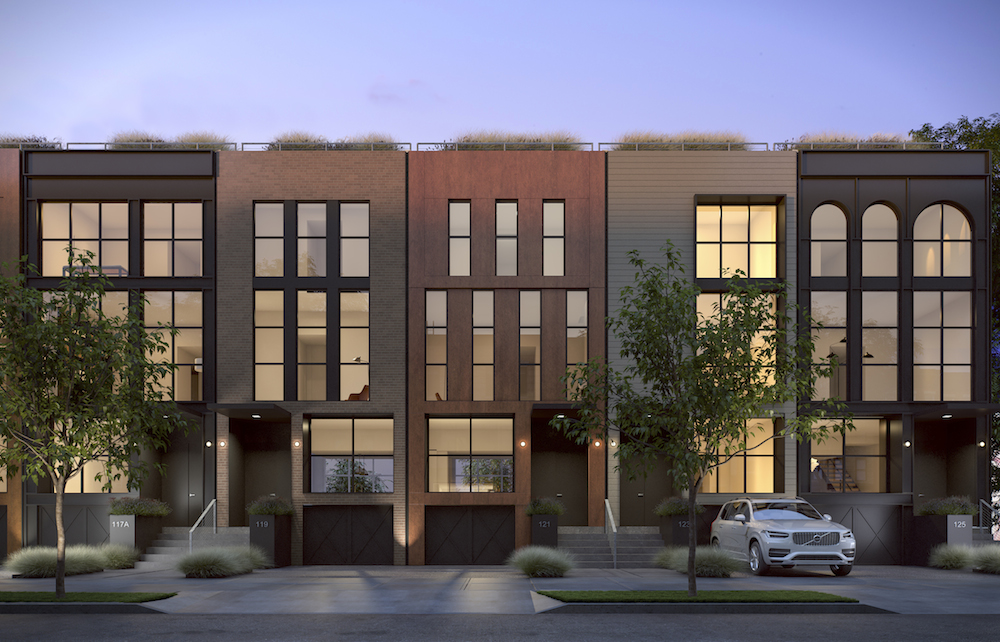 A Brooklyn-based development team is showing some Dutch courage with a new townhouse development in Red Hook.

Their new King & Sullivan Townhomes project has been inspired by a Amsterdam’s Eastern Docklands development, where each home owner was encouraged to stamp their personality on their property by selecting a different architect to design it.

The result was varied designs that resembled a contemporary rendition of an old village in the South of France or in Italy, according to Aldo Andreoli, founder of the architectural firm AA Studio, which has designed the 22 three-story Red Hook houses.

AA Studio’s design replaces a dilapidating one-story warehouse with a block-through development of 2,800 s/f townhouses. A dozen of the houses will be located at 109-125 King Street, with the remaining ten at 72-84 Sullivan St.

Five different facade types inspired by architectural elements in Brooklyn — steel, arches, corten, brick and terracotta — will add variety and individuality to each building, according to Andreoli, just like the Dutch Docklands development.

“We believe that this diversification constitutes a great opportunity to design a creative project, allowing for a freedom of expression hard to realize in other parts of the city,” said Andreoli.
“It appears that these townhomes could only be built in Brooklyn, and in 2015 in a place and time that offers a home for creative expression for art and design.”

Andreoli — whose firm has worked on projects across the US, South America and Italy — founded the real estate development firm, Sanba, with partners Matthew Goodwin and Alessandro Zampedri with an eye to combining the practices of architecture and design, project management, financing, marketing and development.

AA Studio has already seen success transforming the New York Dock Building at 160 Imlay Street on the Red Hook waterfront into 70 luxury condos with gallery and office space, and at 202 Coffey they completed the adaptive re-use of an industrial warehouse into a hub for art, creativity, fashion, design and events, two projects for Los Angeles-based property developer, Estate Four.

King and Sullivan is the firm’s third project in Red Hook, a neighborhood which piqued the interest of Italian-born Andreoli after his first visit there left him with the same creative ethos he felt in SoHo, Tribeca and the Meatpacking District before they were gentrified.

Red Hook, a neighborhood in transition, is a waterfront enclave of low-rise buildings including civil-war era warehouses on cobblestone streets, yet has a relatively low number of townhomes compared to the rest of the borough, making this development a welcome addition.

AA Studio has designed each of the four-bedroom, three-bathroom King & Sullivan Townhomes with features likely found in private houses, such as a 600 s/f roof terrace, a fenced garden in the rear, a parking spot at street level, driveway, and a storage space.

“The typology of the townhome is in large demand because of its human scale and because it reflects a very comfortable and independent way of living right in the middle of New York City,” said Andreoli.
“The townhome is a perfect compromise between the suburban single-family homes and the urban density of small condominiums.”

Construction is already underway on the development, which is expected to be completed by the Fall of 2016. Prices have not yet been released however the developer told Brokers Weekly that Douglas Elliman’s Patty LaRocco has been tapped to lead the sales effort.