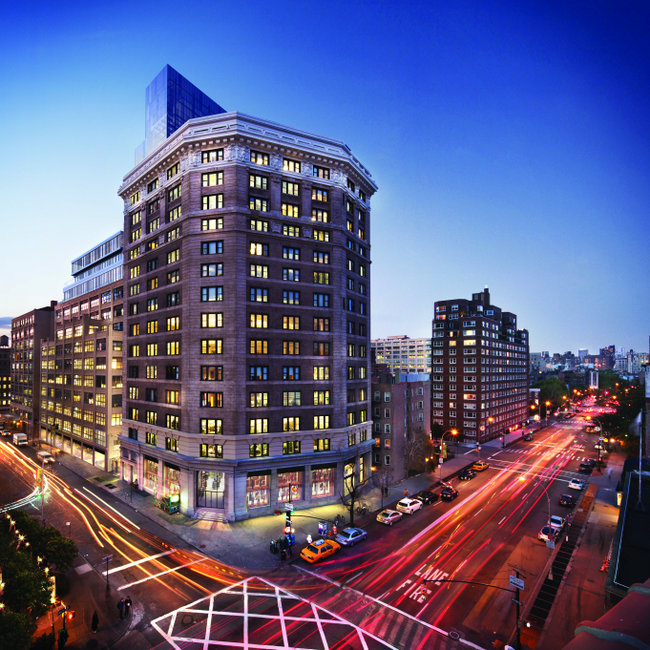 ed by Gensler, consists of 161 Avenue of the Americas and 233 Spring Street and will have a new shared glass lobby and modern central core overlooking SoHo Square Park.

“The adaptive reuse of these pre-war edifices will preserve their aesthetic character while satisfying the demand for 21st century infrastructure and green spaces in state-of-the-art office buildings,” said Ryan Jackson of Stellar Management. “We’re excited to bring this unique Class A office product to market, and we are confident that the project will receive intense demand from companies across a myriad of industries.”

As part of the upgrades, the dramatic new core and double height glass lobby will be One SoHo Square’s focal point and shared entrance. The building will feature nine new passenger elevators, new mechanical systems, and new bathrooms. Three spectacular penthouse floors with private terraces will be added to 233 Spring Street. The new core of One SoHo will provide tenants an efficient floorplate by relocating the building’s infrastructure.

“The side-core configuration allows for an open, collaborative work environment, and will boast some of the most panoramic views in Midtown South,” said Josh Kuriloff, a Cushman & Wakefield Executive Vice Chairman.

“Gensler’s vision significantly upgrades the tenant experience of One SoHo Square, while staying true to the history of the buildings and its surrounding context,” said Peter Wang, Principal and Design Director at Gensler. “The clean, modern design concept utilizes glass, concrete and perforated metals, and is juxtaposed by the existing buildings’ brick, limestone, and historic façade details. The modernization of the buildings’ infrastructure with more efficient mechanical plants and services, and removal of redundant egress stairs, allowed Gensler to identify additional square footage that enabled the addition of the three new penthouse floors.”

161 Avenue of the Americas, a 15-story building, with 26,000-square-foot floorplates, and 233 Spring Street, a 10-story building, with 30,000-square-foot floorplates, along with the new side-core configuration will make One SoHo Square one of the largest, most efficient floorplate offerings in SoHo. The three new penthouses atop 233 Spring Street, ranging from 20,000 to 23,000 square feet, will feature ceiling heights up to 13’6”, unobstructed views, skylights and oversized private terraces. Additionally, the landlord is providing a common area roof deck as an amenity for tenants’ employees.

“The restoration of the building’s original steel columns, oversized windows, and exposed brick interiors combined with state-of-the-art infrastructure elevates the SoHo loft concept to new heights,” said Jodi Roberts, a Cushman & Wakefield Director. “The unique combination of classic style with modern design and technology will make this property a true stand-out in Manhattan.”

One SoHo Square is situated among  popular eateries, including Dean & Deluca and Cipriani Downtown and surrounded by brand name retailers, including Burberry, Ralph Lauren and Prada. The building is also within walking distance of the green, red and blue subway lines.

Advisory board offers preparation tips in event of a strike