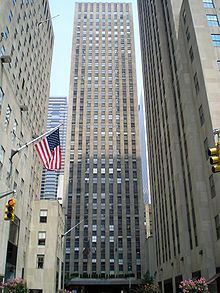 New York’s developers have their eye on the future, and are ready to cater to the desires of modern office tenants.

Scott Rechler, of RXR Realty, described his plans for 75 Rockefeller Plaza, where he recently bought a 99-year leasehold.

The building’s landmarked façade will be restored, he said, while the rest of the building is completely gutted and rebuild. “Inside this historic, iconic Rockefeller center facade is going to be a brand-new 21st century office building,” Rechler said.

The new interior will be LEED certified and feature nine-foot ceilings, all new elevators, outdoor space and a redesigned core that allows for more efficient floor plats, he said.

Other developers speaking on the same panel agreed that modern buildings are needed to attract tenants. “We always heard that the three most important words about real estate, which was ‘location, location location. And that’s changed. It’s now location, location and design,” said David Levinson, chairman and CEO of L&L Holding Company.

Individual buildings, rather than neighborhoods, have the ability to draw tenants, Levinson said, citing the high ceilings, collaborative space, fresh air and floor-to-ceiling windows found in the plans for the many new office towers planned on Manhattan’s far west side.

But even older buildings on the West Side have the potential to draw in tenants.

Rechler cited the example of the Starrett Lehigh Building, which his company purchased and is currently renovating, complete with bicycle storage, doggy daycare and four new elevator banks to accommodate today’s denser workplaces.

“The average rents were $30 a square foot, and this year we did 250 feet of leases at $50 a foot,” Rechler said. “It’s 95 percent leased. Our biggest challenge is to get space back to recycle it through the building as we go through the reposition.”

Downtown, Levinson said that the office space at 222 Broadway, which L&L purchased with Beacon Capital from Bank of America, was leased before it could go on the market.

“There’s an emerging cool factor to downtown that we haven’t seen before,” Levinson said.

With all this movement, landlords who are not keeping an eye on trends are in danger of losing out.

“Some of the losers in this, frankly, or the areas that are more challenged, are the commodity buildings along Third Avenue, etcetera,”Rechler said. “They don’t have character, they don’t have efficient floor plates per se…. would someone want to go downtown to a hipper location on a wash for price?”