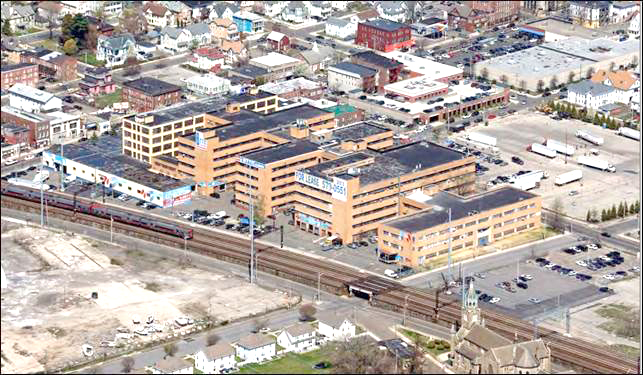 Time Equities has bought the Bridgeport Trade and Technology Center in Bridgeport, CT, for $13.85 million.
The 575,000 s/f complex with 8.29 acres of undeveloped land was sold by Campus Office Park Associates. Louis Zuckerman and Patrick Colwell of CBRE represented the seller.
The TEI acquisition and asset management team led by Max Pastor and Brian Soto spearheaded the transaction for TEI.

TEI’s vision for the Bridgeport Trade and Technology Center is to operate the asset similar to Industry City, a mixed-use complex that was formerly an industrial facility in Sunset Park, Brooklyn. The new owner plans ti create a destination that caters to a wide-swath of tenants, including artists, start-up tech firms, manufactures and distributors.
TEI, led by Francis Greenburger, has become an active investor in the bridgeport, acquiring over one million square feet of commercial space, 176 apartments and 8.5 acres of vacant land within a six-month period.
“TEI is bullish on Bridgeport and we feel that recent acquisitions in the city reflect our commitment to playing a leading role in the evolution of this great city,” said Pastor.
“Bridgeport Trade and Technology Center is one of Connecticut’s largest multi-tenanted flex-space destination. Time Equities will leverage its repositioning expertise to position it as an economic engine for Bridgeport and Fairfield county.”
CBRE’s Colwell commented, “The Bridgeport Trade and Technology Center provides another unique opportunity for TEI to create a new type of commercial product in Bridgeport. Located in a designated opportunity zone, the space is primed to be given new life.”

The former Toys R Us corporate headquarters in Wayne, NJ, has been sold to an unnamed buyer for an undisclosed price.
The buyer “has plans to enhance the site for multiple uses,” according to CBRE, which brokered the sale of the 621,000 s/f headquarters at One Geoffrey Way.

CBRE’s Jeffrey Babikian, Robert L’Abbate, Allyson L’Abbate, Nor Ramos and Brian Godau represented the seller, Toys R Us Property Company I, LLC, and Raider Hill Advisors, a private real estate investment and advisory firm, acting on behalf of the toy company.
Situated on 191 acres overlooking a reservoir, One Geoffrey Way housed the toy giant headquarters for 16 years.
The facility consists of two interconnected office buildings. It was originally build in 1962 as the headquarters for American Cyanamid and completely renovated in 2003 when Toys R Us bought it for $35 million.
“The chance to own a site like One Geoffrey Way does not come around often,” said Babikian, executive vice president. “Not only is the new ownership securing a world-class office complex, but also a one-of-a-kind development opportunity to enhance a site that offers a beautiful campus-like setting with a scenic view and numerous amenities not to mention proximity to New York City.”
According to CBRE, “the buyer plans to enhance the site to be more conducive with the “new” suburban expectations of the office/residential communities with amenities and other supporting functions that will be a key driver in the design of the campus. Everything today is conceptual.”

Holliday Fenoglio Fowler has closed the $66 million sale of 300 Kimball Drive, a Class A trophy office asset of approximately 400,000 s/f in Parsippany, New Jersey.
HFF marketed the property on behalf of State Farm insurance company, advised by Transwestern Investment Group, and procured the private buyer.
300 Kimball Drive is situated on 9.29 acres within a four-building, 850,000 s/f office park called The Center of Morris County.
Originally built in 2001, State Farm occupied it entirely until they started to phase out in 2013 and did a full renovation to accommodate multi-tenancy.

In an off-market transaction, The Donaldson Group of Rockville, MD, New York-based Declaration Capital, and New York-based Angelo, Gordon have acquired Plaza Towers Apartments, a 288-unit high rise apartment community located in Hyattsville, Maryland.
The partnership acquired the property for $42.6 million and plans to invest additional capital for property improvements.
Situated on 6.6 acres at 6700 Belcrest Road, Plaza Towers is within minutes of the $2 billion, 150-acre research-focused Discovery District, and Riverdale Park Station, a 1.4 million square foot town center anchored by Whole Foods.
Also nearby is the University of Maryland’s College Park campus, the largest university in the Washington metropolitan area and a major employment center.
The partnership will enhance and modernize the community., ch will be managed by Donaldson.
“We believe in this growing Hyattsville market and plan to continue investing in quality rental communities in the Washington, DC area,” said John Majeski, Senior Vice President, The Donaldson Group.
Declaration Capital is the family office of David M. Rubenstein, the co-founder and The Carlyle Group.
Angelo, Gordon & Co.is a privately held limited partnership headquartered in New York, with offices across the US, Europe and Asia.

Hines has acquired Oakmead West, a seven-building, multi-tenant campus in Silicon Valley.
The seven Class A office/R&D buildings totaling 431,095 s/f are situated on 21.62 acres in Sunnyvale, California.
Completed in 1998, the Oakmead West campus consists of 920, 935, 940, 945, and 960 Stewart Drive, 490 and 510 DeGuigne Drive.
Oakmead West will undergo capital improvements to create a sense of community for the tenants.
Hines director Shawn Hardy said, “Oakmead West is an exceptional opportunity to acquire and control a critical mass of multi-tenant office/R&D product on over 20 acres in Sunnyvale and we are pleased to add it to our portfolio.”
Oakmead West is 96 percent leased.