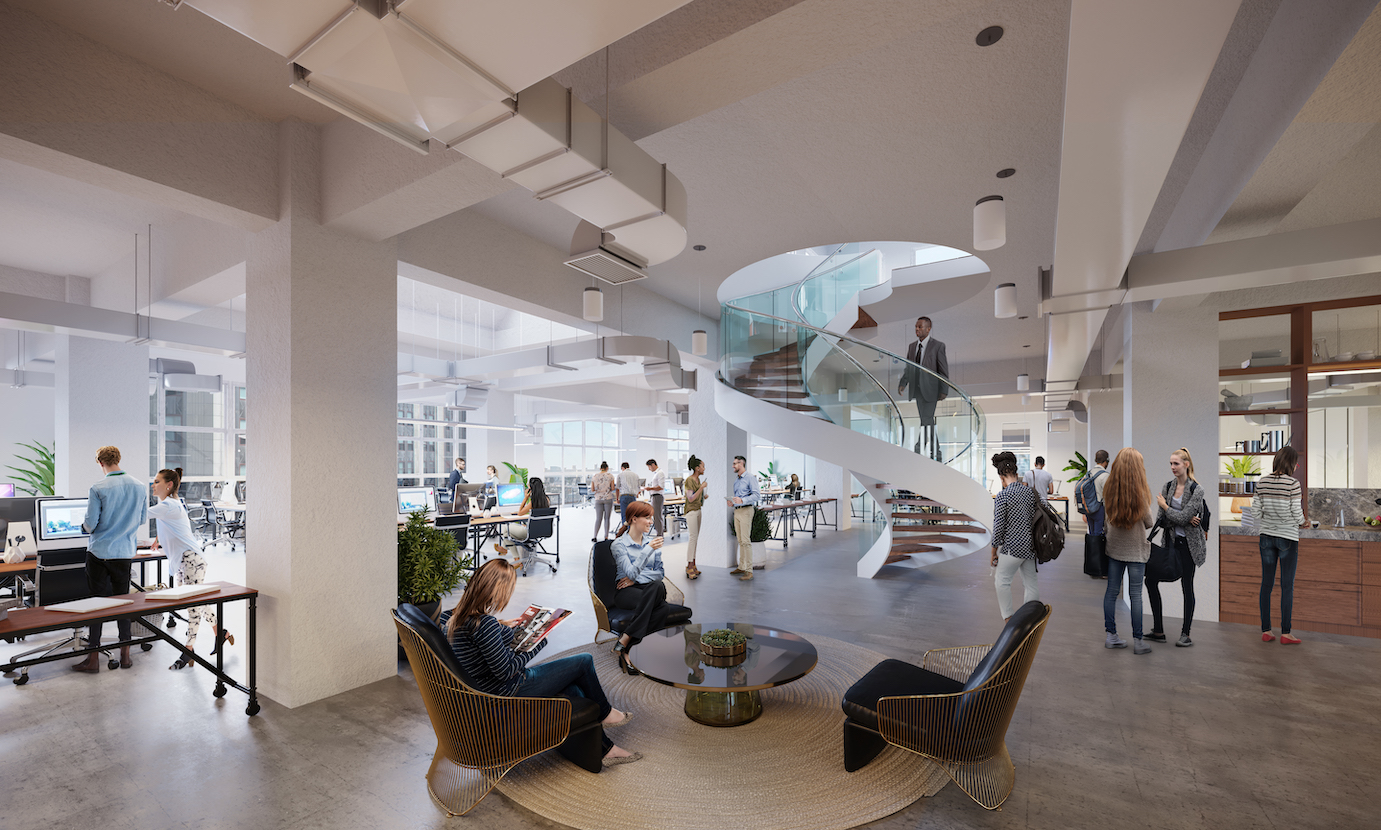 Located just steps off Fifth Avenue, the three uppermost floors at 20 West 33rd Street represent a potential triplex penthouse opportunity with extensive outdoor space on a two-level roof deck, located on 33rd Street between Fifth Avenue and Broadway in the heart of Midtown. These first-class office condominiums offer investors and end-users the opportunity to purchase nearly 34,000 s/f of prime office space with a potential four years of committed cash flow in addition to over 5,000 s/f of usable outdoor space.

The building was built in 1912 and renovated in 2016. The floors last changed ownership in 2015; Q4, a garment company, has a lease in place until 2024. Other businesses in the building include the Glocap Search, National Postal Mail Handlers Union, DK Cosmetics and Xincon Home Health Care Services.

The property is being listed by Kelly Killoren Bensimon of the Holly Parker Team at Douglas Elliman, Marc Roman of Douglas Elliman Commercial and Trystan Polsinelli of 60 Guilders.

The property is comprised of six three-story walkup buildings, as well as two accessory buildings that house a management office. As part of the acquisition, Fairstead is planning an extensive property-wide rehabilitation in excess of $17 million, which will include the renovation of all roofs, sidings, windows, and boilers. In addition, 100 percent of units will receive new kitchens, flooring, cabinets and bathrooms. Fairstead will also be developing new ADA-accessible units and a state-of-the art community center.

“We’re excited to acquire and begin a much needed renovation of Festival Fields Apartments. Our acquisition and complete renovation of the Festival Field Apartments property supports Fairstead’s mission to provide people with a great place to live regardless of income,” said Will Blodgett, co-founder and partner of Fairstead. “Right away, we will commence an $85,000 per unit renovation that will bring quality, affordable housing to this community. Fairstead believes it’s more important than ever to preserve and enrich communities such as Festival Field Apartments as we continue our commitment to developing and preserving exceptional affordable housing nationwide.”

The Tri-State Investment Sales group for Avison Young has arranged the $16.75 million sale of a seven-story boutique office building located at 177 Franklin Street. The property is located in Tribeca between Greenwich and Hudson streets and is home to American lifestyle brand Shinola’s flagship location in New York. It is currently 80 percent leased.

The owner was represented by an Avison Young team led by principal and head of Tri-State Investment Sales James Nelson along with principal Charles Kingsley, associate directors Eric Karmitz and David Lawrence, and associate Carter Lovejoy.

The boutique office building includes a basement and a penthouse offering with unobstructed views of the new Freedom Tower, the Woolworth Building as well as the Manhattan skyline to the north. The building’s total rentable area is of 13,667 s/f and is zoned to allow commercial, residential, and community facility uses as of right.

The building offers 25 feet of frontage on Franklin Street and is just east of the Hudson River waterfront and steps away from the 1 subway line stop at the Franklin Street station. The boutique office is also a few blocks from Canal/Church Street station, providing access to the A, C, and E trains.

JLL Capital Markets has completed the $13.85 million sale of 1364 and 1368 York Avenue, a pair of mixed-use buildings in the Lenox Hill neighborhood for Christian Pompa.

1364 York Avenue is a five-story, 9,180-s/f building that houses 18 residences, 11 of which are free-market units and seven that are rent-stabilized apartments. The property also features two ground-floor retail spaces totaling 608 s/f occupied by Orlando News and Jamil Liquors.

The five-story 1368 York Avenue totals 11,191 s/f and features 19 residences, 18 of which are free-market units and one that is rent-stabilized. In addition, the property includes two ground-floor retail spaces totaling 4,184 s/f occupied by JSK Produce and Green Produce. 1368 York Avenue’s retail space offers 120 feet of wraparound frontage on both York Avenue and East 73rd Street.

The mixed-use buildings are situated on the east side of York Avenue between East 72nd and East 73rd Streets. Combined, the two sites offer 50,030 buildable s/f on a largely undeveloped corner of the Upper East Side.

JLL Capital Markets has closed the sale of a portfolio of three Class A self-storage properties that were owned by affiliates of Banner Real Estate Group. An affiliate of Public Storage purchased the assets.

The properties hold a total of nearly 3,600 units in the greater New York City and Boston areas.

JLL marketed the portfolio on behalf the sellers, which are located in densely populated urban areas with extremely high barriers to entry. The facilities were constructed in 2018 and 2019. The two New York properties are located at 5002 2nd Avenue in Brooklyn and at 479 5th Avenue in New Rochelle, which is in Westchester County, and the Boston-area property is at 490 Eastern Avenue in Malden.