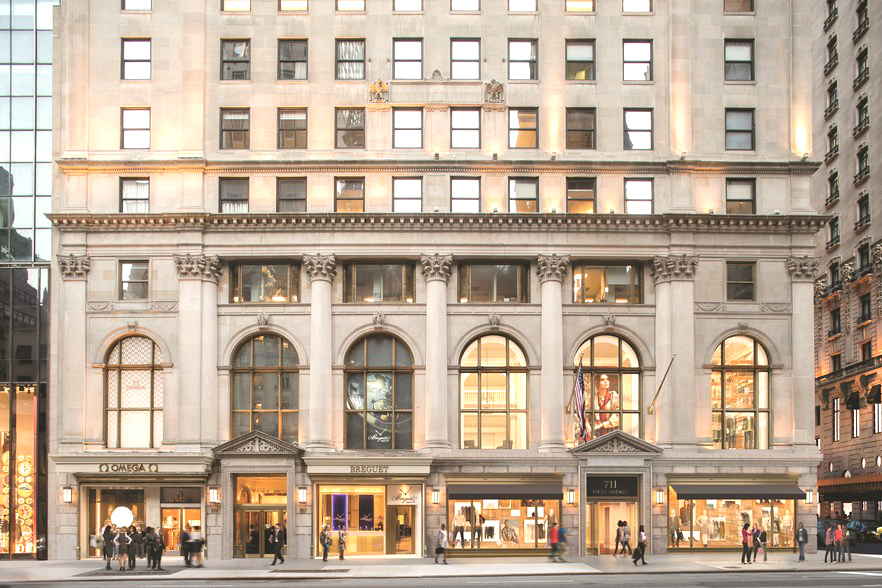 The Coca-Cola Company has tapped Cushman & Wakefield to sell 711 5th Avenue.
The property will be brought to market in early 2019 by the firm’s Institutional Capital Markets team of Doug Harmon, Adam Spies and Kevin Donner.
“711 5th Avenue is one of Manhattan’s best kept secrets, a premier boutique gem with a rich history that dates back to 1927,” said Harmon, chairman, Capital Markets, Cushman & Wakefield.
“We look forward to working with The Coca-Cola Company as we seek a new owner for this world class offering.”
Coca-Cola acquired 711 5th Ave. in 1983 as part of the company’s acquisition of Columbia Pictures. The company has determined that it does not need to retain its investment in the building to support its activities in New York.
Coca-Cola and its bottling partner in the area, Liberty Coca-Cola Beverages, will continue to have a sizable presence in the greater New York metropolitan area.
The 19-floor, mixed-use property is located on the southeast corner of 5th Avenue and East 55th Street. The building consists of 354,000 s/f and is primarily used for office and retail space.

James Nelson and his team at Avison Young are marketing an Upper East Side portfolio of apartments and retail for $40 million.
The three contiguous buildings at 344, 346 and 348 East 62nd Street, between First and Second Avenues, total 45,112 gross square feet across 72 residential and retail units.
AY’s Tri-State Investment Sales team led by Nelson, along with Brandon Polakoff and David Shalom, Eric Karmitz, Philip Bowman and Bradley Rothschild are representing the 60-year ownership.
Featuring 81 ft. of frontage on East 62nd Street, the three buildings offer high ceilings and two retail units at 348 East 62nd Avenue.
“A comprehensive renovation of the properties, including the conversion of the current spacious one-bedrooms into two-bedroom units, could unlock possible increases in revenue,” noted Nelson.
“The ground floor units of each building could also be expanded into the cellar to create spacious duplexes with access to backyards, a rare luxury in Manhattan residential real estate.”
The properties are located on a residential block near public transportation, the Roosevelt Island tram, and the Q and R trains at Lexington Avenue and 63rd Street.

CBRE announced the $83 million sale of Middlesex Logistics Center in Edison, NJ.
A joint venture of ASB Real Estate Investments and Cohen Asset Management acquired the fully leased,
Class A property located at 549 Mill Road, from JP Morgan Asset Management.
CBRE National Partners Brian Fiumara, Mike Hines and Brad Ruppel, along with Tom Monahan, negotiated the sale on behalf of JP Morgan Asset Management.
“This sale is yet another indication of how active the industrial market is in New Jersey,” said Fiumara, an executive vice president at CBRE.
“We are seeing product trading at record highs throughout the state and there seems to be very little indication that this will subside in the near term.”
Completed in 2014, the building features 36 ft. clear heights, 101 loading docks and parking for 190 cars and 135 trailers.

CBRE announced that CBRE Institutional Properties represented an institutional seller in the sale of 100 and 101 Thanet Circle in Princeton, NJ to The KABR Group.
Jeffrey Dunne, Jeremy Neuer, Travis Langer and Zachary McHale represented the seller and procured the buyer.
Thanet Circle is a two-building complex totaling 110,000 s/f that will be repositioned by KABR.
Sitting on over 15-acres at the end of a cul-de-sac, the buildings are less than two miles from Downtown Princeton and Princeton University, offering access to the highly educated workforce in the area, as well as local amenities.
“Value-add deals have become more difficult to find in our market, especially in strong submarkets,” said Neuer.
“KABR was aggressive in their pursuit of this opportunity and we anticipate similar success to their other projects that we have been involved with.”

Ariel Property Advisors has been retained to sell 285-287 Livingston Street, a development site at the center of Downtown Brooklyn.
Ownership is requesting proposals for the block-through property. Located on the north side of Livingston Street between Hanover Place and Nevins Street, the 5,500 s/f site is situated in a C6-4/DB zoning district with a FAR of 10.0 for use as a residential, community facility, office and/or hotel.
By utilizing an inclusionary housing bonus, which increases the total FAR to 12.0, the maximum potential buildable area ranges between 60,000-66,000 s/f.
Exclusive agents Sean R. Kelly, Michael A. Tortorici and David Khukhashvili are representing the seller.
“There are only a handful of development sites readily available in Downtown Brooklyn and demand remains strong,” said Kelly.
“Despite some chatter about an ‘oversupply’ of rentals and condos, Downtown Brooklyn’s residential market continues to deliver peak pricing.”

The Town of Hempstead Industrial Development Agency has approved the sale of the 240-unit Park Lake Residences to Park Lake Owner LLC, Jaffe Family TIC LLC and E. Nelson Family TIC LLC, which together are buying the complex for $42 million.
The new owners, specialists in owning, managing and improving affordable housing projects, plan to spend more than $7 million on renovations.
The 240-unit complex consists of 14 buildings on S. Franklin Street, Martin Luther King Drive, Oakland Street and Doflon Street. Tenants pay rent equivalent to 30 percent of their respective monthly incomes, under HUD regulations.
The owners have said the complex is in need of “a lot of TLC” and physical work. Rents for the residents are not expected to change.
Fred Parola, executive director of the Town of Hempstead Industrial Development Agency, noted that “existing economic benefits” would be assigned to the new owners.
“We are pleased that we can preserve the affordability of apartments in this complex, which has been an affordable place for people to live in the Village of Hempstead for more than 70 years,” said Parola.
“Our action allows new owners to continue to provide affordable housing while they re-invigorate the complex,” said Parola.
The IDA granted benefits in 2005 to the former owner, Park Lake Residences LP, an affiliate of Omni New York LLC, a real estate business associated with former MLB star Mo Vaughn. Those benefits will expire on Dec. 31, 2021. The agency also granted a new 10-year package of benefits.
The new owner has promised to undertake new landscaping, repaint all the apartments, which were built in 1940, and replace kitchens and bathrooms when necessary. The renovations could not be accomplished without a property-tax abatement, according to the new owner.

Avison Young’s Tri-State Investment Sales group has been named the exclusive agent for the sale of 2147 Second Avenue, a newly constructed, nine-story, elevator building in East Harlem comprised of 16 residential units and ground floor retail. The asking price is $10.85 million.
A Tri-State Investment Sales team led by James Nelson along with Sam Shertz and Allan Fries, are marketing the property on behalf of the owner, Hillside Parsons LLC.
“This core-plus, turn-key property offers substantial cash flow and significant potential upside,” Nelson said. “In addition, the recent East Harlem Rezoning, which was approved in 2017, should serve as a catalyst for the neighborhood’s continued growth and revitalization. As a result, we anticipate high interest in this building from a variety of investors.”
The property features 25 feet of frontage and includes 15 two-bedroom apartments, one, one-bedroom apartment, and one retail unit, all fully leased. The building also benefits from the 421(a) tax abatement program currently in place, with an additional 7.75 years remaining.
2147 Second Avenue is walking distance to the 6 subway line and multiple bus routes, and two blocks away from FDR Drive.

Great Neck, NY-based One Liberty Properties announced that it acquired a 220,000 s/f industrial property on 15.74 acres in Bakersfield, California, for $10.9 million.
The building is net leased to The Men’s Warehouse, the primary operating subsidiary of Tailored Brands, Inc. The lease provides for an annual base rent of $667,000 increasing, in early 2019, to $734,000 through lease expiration in 2024.
The facility, to which the tenant has made significant improvements, is used primarily for warehouse and distribution purposes.

Time to get RAD with public housing