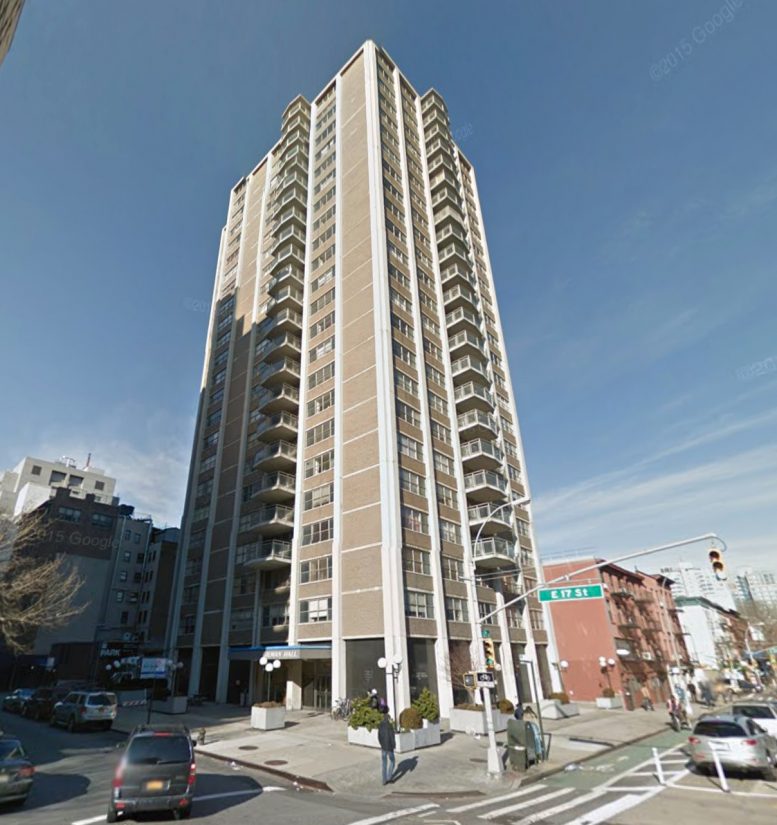 CIM Group has closed on the Gilman Hall site for $87 million, a property which includes the 146,000 S/F Gilman Hall Tower and contiguous parcels in Manhattan.

Built in 1969, the Gilman Hall Tower stands 24 stories high and is located on the corner of First Avenue and East 17th Street. The entire site is zoned for a total of approximately 225,000 S/F, including a combination of community facility, residential and commercial uses.

“While the surrounding neighborhood offers desirable amenities and excellent public transportation that complements a variety of potential uses, we believe the site is particularly well suited for a student housing and educational facility use for which several institutions have expressed interest.”

Eastern Consolidated has arranged the sale of two contiguous, six-story multifamily buildings with 102 units at 556-568 Lefferts Avenue and 570-582 Lefferts Avenue in the Crown Heights/Prospect Lefferts Gardens section of Brooklyn.

Eastern Consolidated senior director and principal Matt Sparks and associate director Matthew Leist represented the seller, F&I Realty Corporation, and Sparks procured the buyer, Treetop Development.
“These well-maintained buildings were highly sought after by a group of investors who recognized their future potential upside and appreciated their spacious one and two-bedroom apartments, which have layouts that can easily be upgraded and reconfigured,” Sparks said.

Leist added, “The buildings are located in an up-and-coming area near the Kings County Hospital Center, the iconic Prospect Park, and transportation on the 2 and 5 trains three blocks away at the Sterling Street Station on Nostrand Avenue.”

Ariel Property Advisors has been exclusively retained to sell 11 East 115th Street, a development site in East Harlem. The asking price for the property is $17 million.

The 135 ft. wide site is located in the neighborhood of East Harlem between 5th and Madison Avenues. With its R7-2 zoning, the property allows for 88,556 buildable square feet, with a community facility bonus, or 54,497 buildable square feet as-of-right for a large-scale residential development.

“East Harlem is not only one of the most transforming neighborhoods in New York City, but the area is poised for exponential growth in the years ahead given the City’s proposed rezoning initiatives,” said Victor Sozio, executive vice president at Ariel Property Advisors.

The development site is surrounded by retail and new residential developments, many of which are consistently achieving condo sellouts at or above $1,000 per square foot.

Marcus & Millichap is listing a retail condominium at 98 Avenue A, between 6th and 7th Streets in the East Village.

The asking price for the 12,052 s/f unit, fully occupied by Blink Fitness and located at the base of 100 Avenue A, an eight-story, 33-unit luxury condominium building, is $22.95 million.

Scott Plasky and John Iannuzzi of Marcus & Millichap’s Manhattan’s office are marketing the property on behalf of Partners Vi98 Avenue A Owner, LLC.

Located near Tompkins Square Park, the retail unit consists of a 6,805 s/f ground floor and a 5,247 s/f lower level, with 108 ft. of retail frontage on Avenue A.

The unit is 100 percent occupied by Blink Fitness, which has 14 years remaining on a 15-year lease, with 12 percent increases every five years and two, five-year options to renew. Blink Fitness is responsible for all taxes above their base-year of 2015-2016.

Plasky said, “It is a tremendous opportunity for someone looking for a zero-management retail asset in Manhattan with a great tenant, solid increases and future appreciation.”

Eastern Consolidated has arranged the sale of a newly constructed, one-story commercial property at 507 West 24th Street that the firm’s retail team leased to the Marianne Boesky Gallery last year.
The building located directly beneath the High Line traded for $10.75 million.

“By first leasing the space to a prestigious gallery, we were able to unlock the true value of the property, making it especially appealing to the buyer,” Cohen said.

The unique, 7,200 s/f property – with 3,900 s/f on the ground floor and 3,300 s/f on the lower level – stands below the section of the High Line that runs over West 24th Street, just off of the northwest corner of Tenth Avenue and one block north of a High Line access point at West 23rd Street.

“The building was built spec for gallery use less than four years ago,” Papanastasiou said. “It boasts 15-foot ceilings, an elevator, and 40-feet of frontage on West 24th Street, steps away from Tenth Avenue. It’s one of the most unique buildings in West Chelsea, which remains one of the most desirable and recognized art districts in the world and continues its transition in becoming a true multifaceted neighborhood.”

Ariel Property Advisors is marketing 2901-2915 White Plains Road, a commercial building in the Allerton section of The Bronx, at $19 million.

The assemblage, which spans 53,000 square feet and offers over 272 ft. of retail footage, is anchored by Brightside Academy and SUNY (State of NY), along with six retail tenants and four office tenants on the second floor.