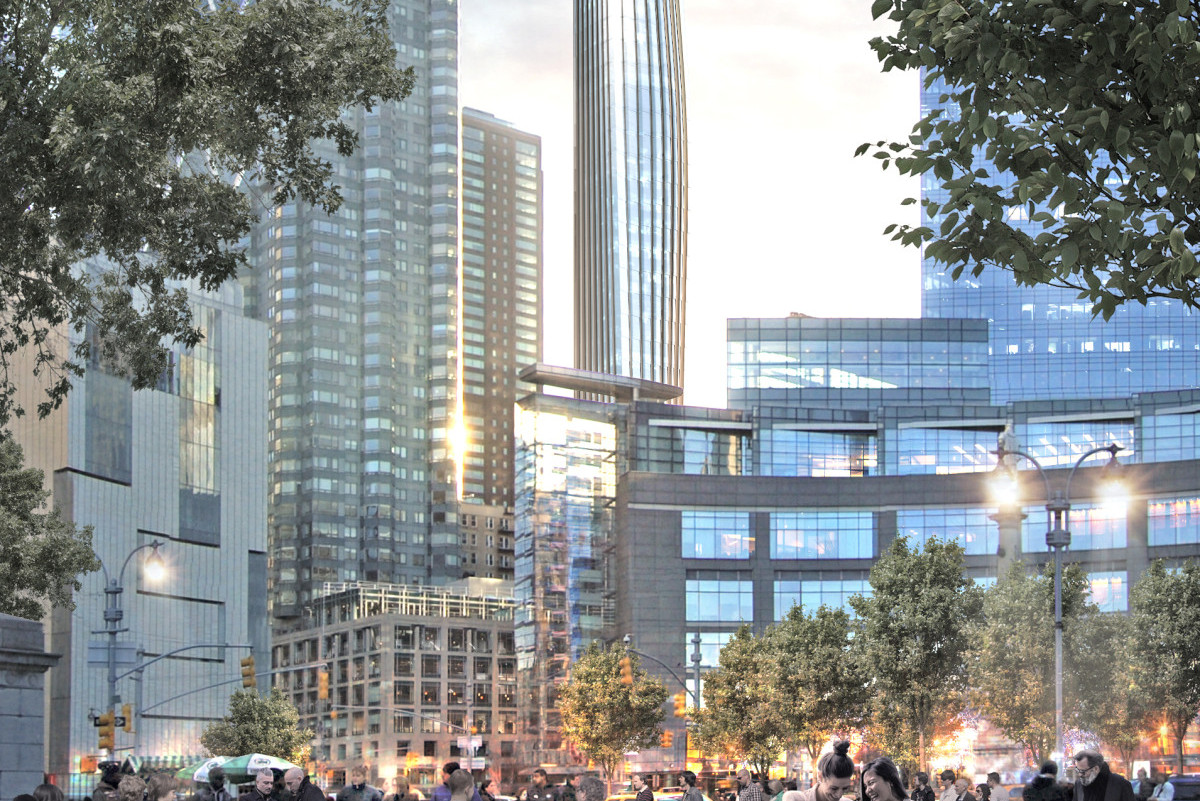 All the world loves a prime development site

Global interests are rumored to be jostling for a development site adjacent to the city’s so-called Billionaires Row.

“This is a world-class development opportunity and we expect to see tremendous interest from across the globe,” said Knakal.

Currently home to an existing hotel, 6 Columbus Circle is situated with 42 feet of frontage along the famous shopping, dining and cultural corridor that has become an enclave of exclusive commercial and residential properties.

Offers for the property — which is expected to fetch close to $90 million — are due February 19.

The transaction is structured as a 99-year ground lease and represents Hakimian’s third investment in the Queens neighborhood.

“With the uptick in cool tech startups and creative firms, and tremendous new residential development underway, Long Island City is on its way to becoming the ultimate live/work/play neighborhood and there is a need for dynamic commercial space like 44-16 23rd Street that can accommodate the needs of this type of community,” said Shawn Hakimian, partner and director of marketing and sales at The Hakimian Organization.

“Long Island City is poised for significant growth and 44-16 23rd Street is strategically located at the center of it all.”

The industrial-style building offers two floorplans with exposed brick, high ceilings and large windows. The rooftop can accommodate a large-scale event space or a similar concept.

Hakimian plans significant upgrades and build-out depending on the tenant’s needs. 44-16 23rd Street can be delivered for a single tenant or multiple tenants, with ground floor rents at $55 psf and $45psf for the second level.

The Hakimian Organization is currently developing two residential properties in the area, a 45 unit rental at 41-32 27th Street, and a 95-unit rental at 33-01 38th Avenue.

Cignature Realty Associates announced the sale of an Upper West Side rental building for $21.6 million.

Lazer Sternhell and Peter Vanderpool represented both the seller, Quantum Equities, and the buyer, Sugar Hill Capital Partners, in the off-market transaction.

The 1955, six-story elevator building at 4300 Broadway, between West 183rd and West 184th Streets, has 54 apartments and one 6,000 s/f vacant retail space. The building is rent-regulated with studios and one and two-bedroom apartments.

“Sugar Hill Capital Partners was the right buyer at the right time for this asset and we are proud to have been able to complete this transaction for both parties in  a seamless and efficient manner,” said Vanderpool, president of Cignature Realty Associates.

“The time was right for divesting this asset,” said Yitzie Pretter, a vice president of Quantum Equities in a prepared statement.

“Between the new transportation hub being nearly finished and the expiration of the original retail lease, we received an excellent return on our investment.”

In October 2013, Quantum and Crest Realties bought the property for $9.9 million. “It was a partnership and now we are the ones involved in the sale,” Pretter explained.

TerraCRG announced the sale of 15-25 Crown Street, a  58-unit building in Crown Heights.

This represents the highest price per unit paid for a multifamily building in Crown Heights and Central Brooklyn. The seller was BCB Property Management and the buyer was Sterling Equities.

“This transaction was a win for all parties,ˮ said Hess.

“Sterling Equities was able to acquire an asset of scale near Prospect Park with significant upside potential. BCB was able to capitalize on investor demand for elevator buildings in Brooklyn and sell at a significant profit over a short period of time.”

1302 Newkirk Avenue (aka 595-601 Arygle Avenue) has been in the same family for over 40 years, according to Gestel, who represented the family in the sale to a private investor brought in by Singer.

The six-story building contains 90 residential units and was constructed in 1931. The 95,050 s/f property sold for $277,777 per unit, a price the brokers believe could be a new record for the neighborhood.

“The family has owned the property for over 40 years, but the current exuberant market led them to take advantage of pricing to exit the property now,ˮ said Gestel.

EPIC Commercial Realty has been retained to broker the sale of 225 East 82nd Street in Yorkville.

Located between 2nd and 3rd Avenues within walking distance of Central Park, the Metropolitan Museum of Art and the 2nd Avenue subway line, Epic CEO Yona Edelkopf said, “This is an amazing opportunity to capitalize on the unequivocal transformation of Yorkville into a premier residential neighborhood of the world, primarily driven by strong transportation infrastructure and the expected influx of retail, commercial and residential development.”

Standing six-stories tall, the property consists of 27 apartments, 21 one of which are at fair-market value and six of which are rent stabilized. The property can be delivered with up to 17 vacant units.

The property also offers an opportunity for condo conversion.

Benchmark Real Estate Group has closed on the $13.5 million off market purchase of 50 Orange Street in Brooklyn Heights.

Principal Jordan Vogel said the company intends to renovate the entire building and turn it into high-end luxury rentals.

The five-story property built in 1900 contains 20 units and is located two blocks from the subway.

The sale price equates to a 4.5 percent cap rate and the seller was Orange Acquisition, LLLC.

Hotel Elysée, a boutique hotel which serves as the home to the famous Monkey Bar, sold for $55 million to the hotel’s subtenants.

“It was sold under the terms and conditions of the existing lease,” said Alan Cohen, partner at ABS Partners who brokered the sale.

Cohen said ABS was the ideal choice to handle the transaction due to the firm’s expertise in facilitating generational deals.

“This building is a beautiful, beautiful building built in the 30’s that was under a long-term lease has a tremendous amount of history,” said Cohen.

“There was an overwhelming response by well-qualified buyers for this renowned, well-kept historical property,” Cohen said.

The Kessner family is selling the retail and office building 145 East 125th Street.

The six-story, 36,000 s/f elevator building is fully occupied with three ground floor retail tenants and one office tenant above.

The retail tenants benefit from the building’s cumulative 160 feet of wrap around frontage along Harlem’s bustling 125th Street retail corridor.

The Salvation Army has signed a lease to occupy the building’s five upper floors.

With some 3.5 million square feet of new development within a two block radius of the property, Knakal expects demand to be high.

“The strength of this retail corridor is undeniable, consequently, demand for this asset will be tremendous,” said Knakal.

Ariel Property Advisors has been retained to sell the Montrose Development Assemblage.

The seller also has DOB plans that yield a 54,124 s/f structure with residential, retail and community facility components.

“With its close proximity to the most desirable subway line in Brooklyn, coupled with the diminished supply of sites with scale in the area, this assemblage affords new ownership to carve out a premier destination for people who are continuing to flock to this popular area,” said Tropp, Vice President at Ariel Property Advisors.

A retail shopping center at 55 Hartz Way, on the corner of Secaucus Road and Hartz Way, in Secaucus, New Jersey, has been sold for $11.5 million.

The two-story property contains 74,000 s/f and sits on a 5.8-acre lot. The center consists of nine commercial units of office and retail space. Recent tenants include Escada, Nine West, Kasper, Fragantics and Design Within Reach Outlet.

The building features solar panel roofing and has plans in progress to utilize geo-heating systems. The sale price equates to approximately $155 per square foot.

Institutional Property Advisors (IPA), a division of Marcus & Millichap, announced the sale of two multifamily properties that sold for a combined $33 million.

“The properties are both highly stable multifamily assets that provide residents with the benefits of small town living and easy commutes to large population centers, shopping and employment; additionally, the assets are extremely well positioned to increase value through a modest unit and exterior renovation program,” according to IPA’s Victor Nolletti, who spearheaded the deal.

“The property is in a prime location, which is what attracted our 1031-exchange buyer,” added Sean Lefkovits.

Koicim and Lefkovits, along with Peter Von Der Ahe and Joshua Grossman, arranged the transaction.