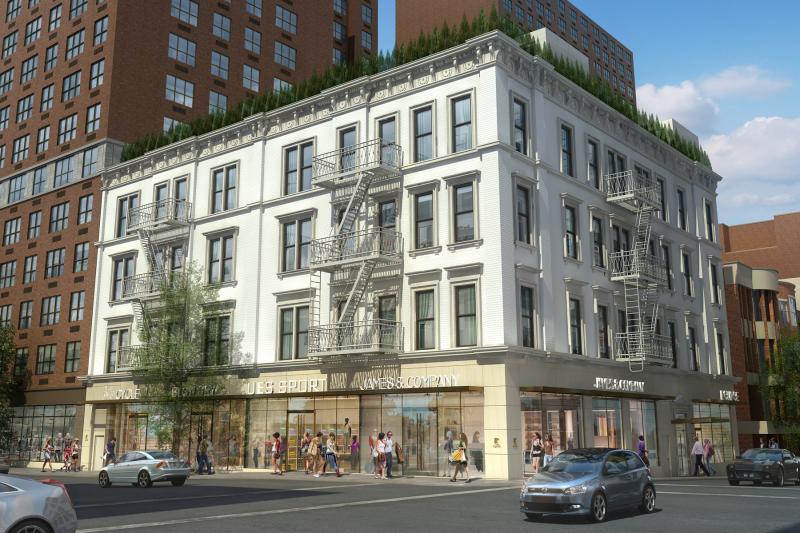 SL Green is in contract to sell its fee interest in 1231 Third Avenue and an Upper East Side assemblage consisting of four properties on East 72nd Street and 31,076 s/f of development rights, for a combined sales price of $143.8 million.

The REIT took possession of 1231 Third Avenue during the third quarter of 2018 when the company’s mezzanine debt investment on the property was converted to equity.
The mixed use property is comprised of 20 residential units, which are currently 100 percent occupied, and 16,418 s/f of retail space, which is currently 70 percent occupied, inclusive of 8,159 s/f at grade.
The assemblage, comprised of 260 East 72nd Street, 252-254 East 72nd Street, 257 East 71st Street and 259 East 71st Street, is on the southwest corner of 72nd Street and Second Avenue, directly across the street from a new station on the 2nd Avenue Subway.
“The sale of 1231 Third Avenue highlights the strength of our debt and preferred equity platform, where we were able to take possession of a property at an attractive valuation and quickly execute a sale at a price that exceeds our basis,” said Brett Herschenfeld, managing director at SL Green.
“The sale of the Upper East Side Assemblage allows us to redeploy capital to other pending development projects that the Company is undertaking in its portfolio, and stock repurchases.”

● CUSHMAN & WAKEFIELD
$46M church trade a  win-win for everyone

Cushman & Wakefield advised Riverside Church on its $46.5 million acquisition, leaseback, and financing of McGiffert Hall, an 82-unit apartment building at 97-101 Claremont Avenue in Morningside Heights.
The seller was Union Theological Seminary, whose campus is directly east of Riverside, on the superblock bounded by Claremont Avenue, West 120th Street, Broadway, and West 122nd Street.
Union currently uses McGiffert Hall for student and faculty housing, and has leased the property back until it finishes construction of new space on its campus.

Riverside Church owns all the other properties on this superblock, including its gothic-style church built in 1930.
The land on which McGiffert Hall sits was deeded to Union in 1931 by John D. Rockefeller, Jr., and his wife Abby. The deed contained a right of first offer to Riverside to provide it with the opportunity to control its entire block when Union no longer needed McGiffert Hall.
“This acquisition is a win for both institutions,” said Frank Liantonio, of Cushman & Wakefield’s Brokerage division. “Riverside has control of the superblock as envisioned by the Rockefellers, and Union monetizes a surplus asset, while maintaining occupancy until their new facility is completed.”
Liantonio led the team advising Riverside, with the assistance of Marc Nakleh of the firm’s Valuation division. Mark Ehlinger of Cushman & Wakefield’s Equity, Debt & Structured Finance division arranged the acquisition loan

A Madison Avenue walkup that houses one of Eli Zabar’s outposts has been sold for $27.5 million.
The five-story building at 1064 Madison Avenue has eight apartments and Eli Zabar’s E.A.T. restaurant in the basement, first, second and third floors. The building is more than 11,500 s/f with another 16,000 s/f of air rights.

Nicole Carra of NLC Realty repped both buyer and seller, Joshua Goldberg’s Goldberg Group which purchased the building for $26 million in 2014, according to public records.
Earlier this year, Zabar sued the landlords of 1064 Madison Avenue, seeking $5 million in damages for claims of bullying and harassment to get E.A.T. out of the building. According to the complaint, E.A.T. was the remaining tenant but had a lease that lasted until May 2022 with an option for another five-year renewal. The lawsuit was dismissed in September.
Carra said E.A.T. would be staying until 2022 when it would have the option to renew and that there were no plans from the buyer to use the air rights.

Summit Development has bought the former Union Carbide headquarters in Danbury for $17 million or $16 psf.
The discounted price will allow Summit to reposition the 1.2 million-square-foot complex and offer the lowest Class A office rents in Fairfield and Westchester Counties, according to a press release from Felix Charney, president of Summit Development.
Plans call for converting the largely vacant complex, which has most recently been called The Matrix, into an office, retail and residential development to be rebranded The Ridge at Danbury.

The site consists of 100 acres, 25 of which are to be zoned for residential development.
Summit plans to subdivide the building into 700,000 s/f of office space; 400,000 s/f of apartments; 100,000 s/f of conference and event space; and 100,000 s/f of amenities. Cushman & Wakefield has been tapped to run the new leasing campaign.
Union Carbide invested $480 million to create the campus when it moved there in 1980. The company’s fortunes collapsed after the 1984 fire at their pesticide plant in Bhopal, India, that resulted in 8,000 deaths. In 2002, the company was acquired by Dow Chemical and the building was sold to Grubb & Ellis.
The brokerage installed office tenants before selling to Long Island real estate investor Glen Nelson in 2009, who renamed it The Matrix. After his death in a 2015 auto accident, the property fell into receivership.

Square Mile Capital Management and Innovov Property Group have formed a joint venture to acquire the fee simple interest in 58-30 Grand Avenue in Maspeth, Queens, for $39 million.
The partners plan to modernize the three-story 151,500 s/f industrial facility to meet demands on supply chains created by the nation’s e-commerce explosion.
The Maspeth site is a 30-minute drive from lower and upper Manhattan.
Innovo CEO Andrew Chung commented, “We were very excited to make this investment, which addresses the pressing need for modern distribution facilities within close striking distance of Manhattan. ”
Square Mile managing director Jesse Goepel added, “This timely investment in the region’s commercial infrastructure fits well with our firm’s opportunistic strategy while also increasing our New York City footprint.”

The condo was sold for $12,878,160 to Glocap Search LLC, an executive search firm.
The firm’s tri-state Investment sales team led by James Nelson, with Henry Post and David Lawrence, represented sellers, 60 Guilders and The Carlyle Group. Rudder Property Group represented Glocap Search.
“This transaction is an excellent example of how a well-established firm can reap the long-term benefits of owning rather than leasing its office space,” Nelson said.
“Glocap will enjoy tax benefits, own an asset that may appreciate in value, and maintain its built-out space for the long-term without worrying about leaving their contributions behind when the lease expires.”

Castle Lanterra Properties (CLP) has expanded its mid-Atlantic portfolio with the $32 million acquisition of Meridian Obici, a 224-unit, Class-A community in Suffolk, VA.
“The state of Virginia has long been on our investment radar,” said Elie Rieder, CEO of Castle Lanterra Properties, noting the company acquired 409 units in 2013 and seen “tremendous growth” over the past five years. “This investment offers a strong combination of steady yield and deep intrinsic value.”
CBRE|Hampton Roads represented the seller, Waverton Associates. Built in 2016, the property consists of seven four-story buildings, a pool, fitness center, theater and business center.

71 Fifth owners get ready for next phase of investment