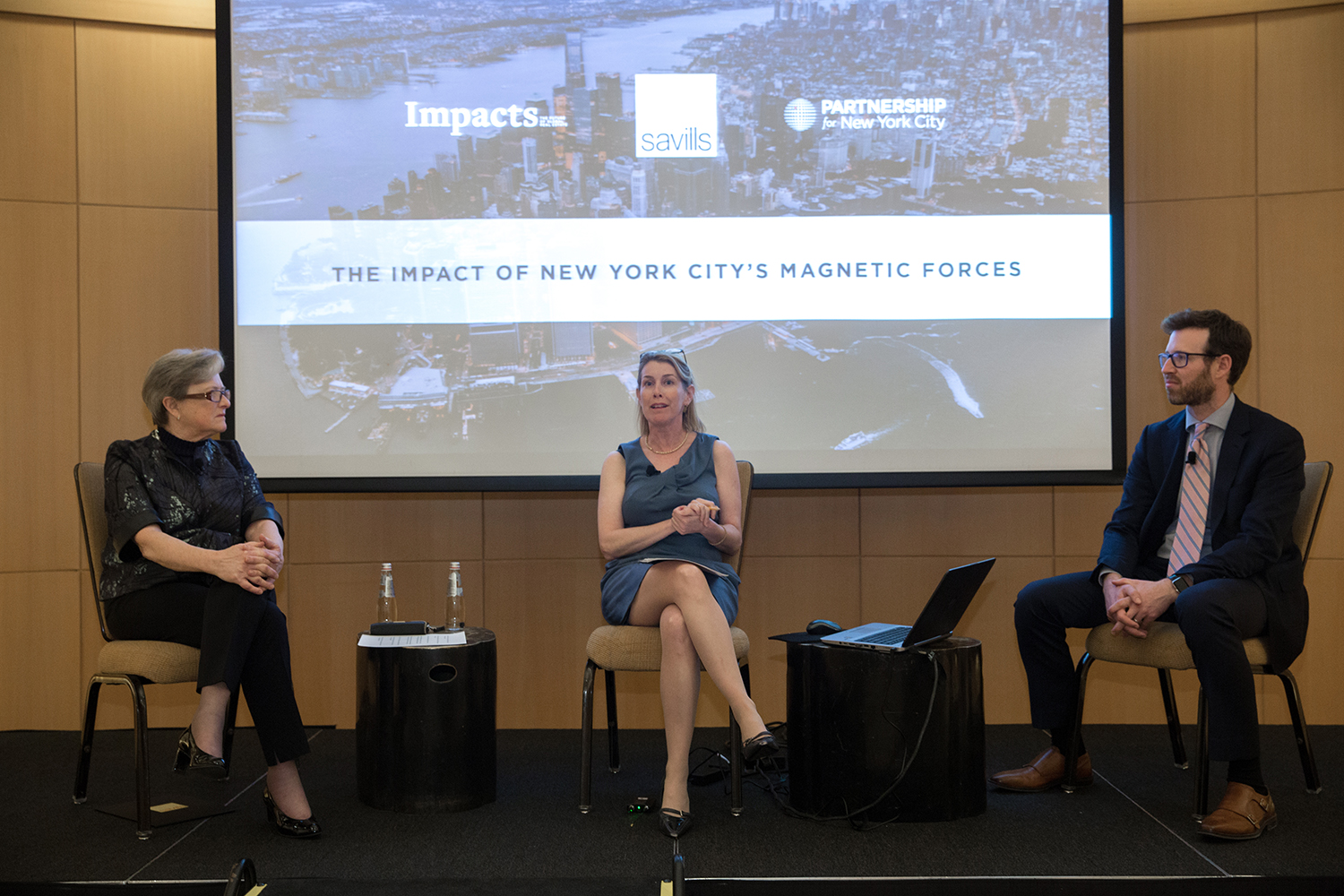 More than 60 guests gathered to hear the latest research and insights from Savills Chief Economist Heidi Learner and Senior Managing Director of Workforce Strategy Kevin Kelly. Taking a cue from the IMPACTS 2019 theme – disruption – the panel discussed the magnetic forces attracting and repelling people and businesses in New York City.

Moderator Kathryn Wylde, president and CEO of the Partnership for New York City, steered the discussion across a range of topics from the demographic and geographic shifts reshaping New York’s real estate market, to infrastructure, education and the rising force of the technology sector.

Learner noted that while New York City’s employment growth is slowing, the overall economy remains robust, and tourism is at an all-time high. Growth in tech sector jobs of more than 50 percent has offset slower growth in the financial services sector, which is still the largest employment sector, but has not yet fully eclipsed its pre-recession levels.

The panelists agreed that the increasing diversification of New York’s economic base is a positive trend. Wylde pointed to the recent rise in domestic in-migration of young people as the key driver of the city’s population growth.

Wylde cited recent research by the Partnership that showed that the number one concern among foreign companies investing in New York is infrastructure, particularly transportation. Kelly noted that New York’s wide network of subways, trains, buses and ferries connecting the suburbs to the city is one major factor making it possible for New York to compete with other metropolitan areas.

This connection balances out the higher cost of central-district housing.

Learner added that industry diversification is crucial for New York’s continued growth. Nonetheless, the fact remains that outside of financial services, compensation is significantly lower, which weighs on the city’s tax coffers, she said.

Kelly emphasized the importance of mapping where specific talent pools reside and the distance they commute in order to predict where companies should locate.

The optimal recruitment area for the highly desirable “young and educated” workforce has shifted from Central Midtown in 2000 to Lower Midtown in 2015 and by 2021 would be shifting again to Downtown Manhattan.