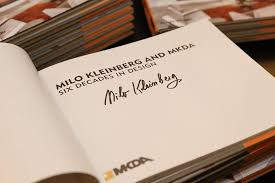 MKDA has launched its year-long 60th Anniversary celebration with the release of a historical memoir titled Milo Kleinberg and MKDA: Six Decades in Design.

“As we celebrate our 60th Year, we are pleased to share my dad’s life story, and the story of how MKDA evolved from a boutique firm with a single focus into a powerful architecture and interiors brand with broad geographic reach and expertise in all real estate asset types,” said MKDA president Michael Kleinberg.

According to MKDA Partner Jeffrey Kleinberg, “Milo Kleinberg and MKDA: Six Decades in Design begins with a young boy who, along with his parents and sister, escaped Vienna after the Nazis took over, became a U.S. citizen, and started a trailblazing business that in its early years elevated the design industry in immeasurable ways.

“The memoir is a gift to my dad, his children and grandchildren, our associates and those who worked with us over the years, and a celebration of the firm’s contributions to the industry.”

MKDA’s roots in real estate began in the 1960s when Mr. Kleinberg earned the moniker “King of the Garment Center” for his work on countless fashion showrooms.

The firm soon solidified its reputation as a workplace leader and began to partner with many brokers and owners, including real estate legend Larry Silverstein, on their commercial assets.