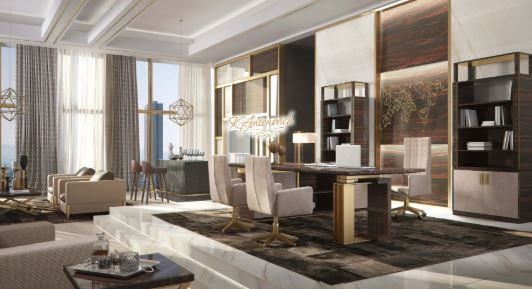 The Sapir Corp is turning some of its hotel rooms into offices as its looks for ways to beat the pandemic blight that has reduced New York’s hotel occupancy rate to record lows.

“As demand in the hotel and office industry continues to shift during the pandemic, we’re looking to stay ahead of the curve and provide New Yorkers with a private, serene environment where they can experience distraction-free luxury,” said Amir Richulsky, CEO of Sapir Corp.

“Whether people have had it with working from home with kids  but uncomfortable with going back to a communal office environment – or simply need a place to get away for a mental health boost – YourPlace provides several options including top-flight hotel amenities, contactless business center services, in-room salon and fitness offerings, beautiful Manhattan skyline views and delicious fresh cuisine from NOMO Kitchen.  We welcome our fellow New Yorkers to make the NoMo SoHo their second home with the YourPlace program.”

Other perks include discounted parking and a dedicated personal assistant.  Guests feeling a bit tired at the end of the workday can also convert their stay to an overnight visit at preferred rates.

“It is most definitely a good idea as it makes use of the low occupancy in city hotels that likely will prevail well into next year,” said Dandipani.

“We have not yet seen this elsewhere in NYC, but it has already happened in Salt Lake City, UT and Dubai,” said Dandapani. “This may well be something others offer here before long as the current condition of the industry is extremely dire.”

According to HANYC, hotel revenues dropped 85 percent the week after Governor Andrew Cuomo signed the Shelter in Place order on March 20 and have remained, on average, 75 percent below the same period last year.

“The industry is not expected to recover in any meaningful way till early 2024,” said Dandapani

HANYC has been lobbying the state for property tax relief for hotels after they were shut out of last week’s legislation aimed at helping the city’s commercial property owners by deferring tax payments and reducing late penalties.

Before the pandemic, hotels constituted a nearly $11 billion industry that employed more than 55,000 people, most of whom were city residents. In less than a week, more than 75 percent of those revenues vanished into the ether, with nine out of every 10 employees furloughed or laid off.

“Despite these staggering and unprecedented losses, hotels stepped up when the city most needed them, sheltering thousands of front-line health care workers, recovering patients and the homeless,” said Dandapani.

“Yet the City Council has now adopted a property tax relief bill that completely ignored the plight of the vital hotel industry. With no relief from the city, a significant contingent of the city’s hotels will default on their July 1 property tax bills; many will go out of business permanently. As if to add insult to injury, the interest rate on defaulted payments for hotels is set at the borderline usurious rate of 18 percent.”

Dandapani added, “Unlike many similarly affected industries, hotel owners have little or no ability to pass on their fixed property tax costs to their customers as do commercial landlords who own office buildings and retail space. It’s worth noting that in 2019, hotels paid $1 billion in real estate taxes to the city, along with remitting nearly $2.1 billion in sales and occupancy taxes, in addition to paying $450 million to the state.

“The Covid-19 crisis has made the cumulative burden on the hotel industry entirely untenable, resulting in an unprecedented liquidity and solvency crisis. In asking for relief, the industry underscored that a return to vibrancy for the city requires the continuance of a substantial number of hotels as part of our tourism infrastructure, borne entirely by the private sector.

“While it is obvious that the de Blasio administration and the City Council are grappling with a massive deficit in revenues, failure to recognize the certain loss of a substantial number of stakeholders in an essential industry is regrettable and shortsighted.”