With the harsh winter behind us, many indicators are revving up again and following the accelerating pattern observed in the latter half of 2013.

Housing is one aspect of the economy that has hit a rough patch, due in part to a particularly cold and long winter in addition to a 100 basis point (bps) rise in mortgage rates over the past year.

The near-zero first quarter GDP growth figure should be ignored — nearly all due to the weather. The U.S. economy is currently as strong as it has ever been in this recovery.

The labor markets continue to make significant progress. The U.S. economy has created over 8.2 million jobs in this recovery, 533,000 over the last past three months.

By the summer of this year, employment will finally be back to its pre-recession peak.

Median household income is growing at an average rate of 3.1 percent in the tightest labor markets in the country (those with unemployment rates below 5%). Over 50 metropolitan areas in the U.S. fall into that category today, and nearly every metro in the U.S. is experiencing a precipitous decline in unemployment. According to Thorpe, housing is one key indicator to watch this spring.

While some housing market indicators slumped during the past few months, almost all trends are positive when looking back a few quarters. 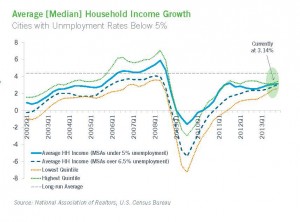 Mortgage rates are 100 bps higher than they were a year ago and it’s tempting to blame higher rates for the slowdown in home sales.

But it’s unlikely that the increase in mortgage rates was the primary factor given that rates have risen fairly gradually over the course of an entire year.

Moreover, the 30-year fixed rate mortgage is still historically low, at 4.3% in April, and other metrics show that housing is still affordable by historical standards.

Rather, seasonal patterns and unusual weather are the primary culprits.

There was a wave of serious deleveraging that ended in April 2011, and since then, revolving credit has increased at a rate of only about 0.1% per quarter.

When this type of spending starts to rise — that is, small and

medium-sized discretionary credit card purchases—it will signal that there has been a significant boost in consumer morale — and lenders’ willingness to lend –and we will see its impact in the economic data.

The performance of the commercial real estate market continued to be strong and uneven throughout the first quarter of 2014.

Most trends in each sector continued through the beginning of the year from last quarter, though some will resume once the impact of the unusual weather is finally over.

Apartment and industrial space continued to register large increases in demand, while office and retail continued to lag.

In line with broader economic movements over the past few months, the office sector’s performance slowed during the cold months but warmed up in March.

Despite the demand gains, U.S. vacancy remained unchanged at 15.4% as 10.5 msf of new office space delivered to the market in the quarter, roughly matching absorption.

The industrial sector continued to register healthy demand numbers in the first quarter of 2014, albeit at a slightly slower pace than the lofty numbers reported in 2013.

The multifamily sector continues to be the most upbeat story among commercial properties. With vacancy falling to 4.0%, multifamily vacancy is currently 140 bps below its long term average.

As the sector that is experiencing the slowest recovery, retail struggled to perform over the colder months when spending and sales fell.

Itzhaki takes his name back