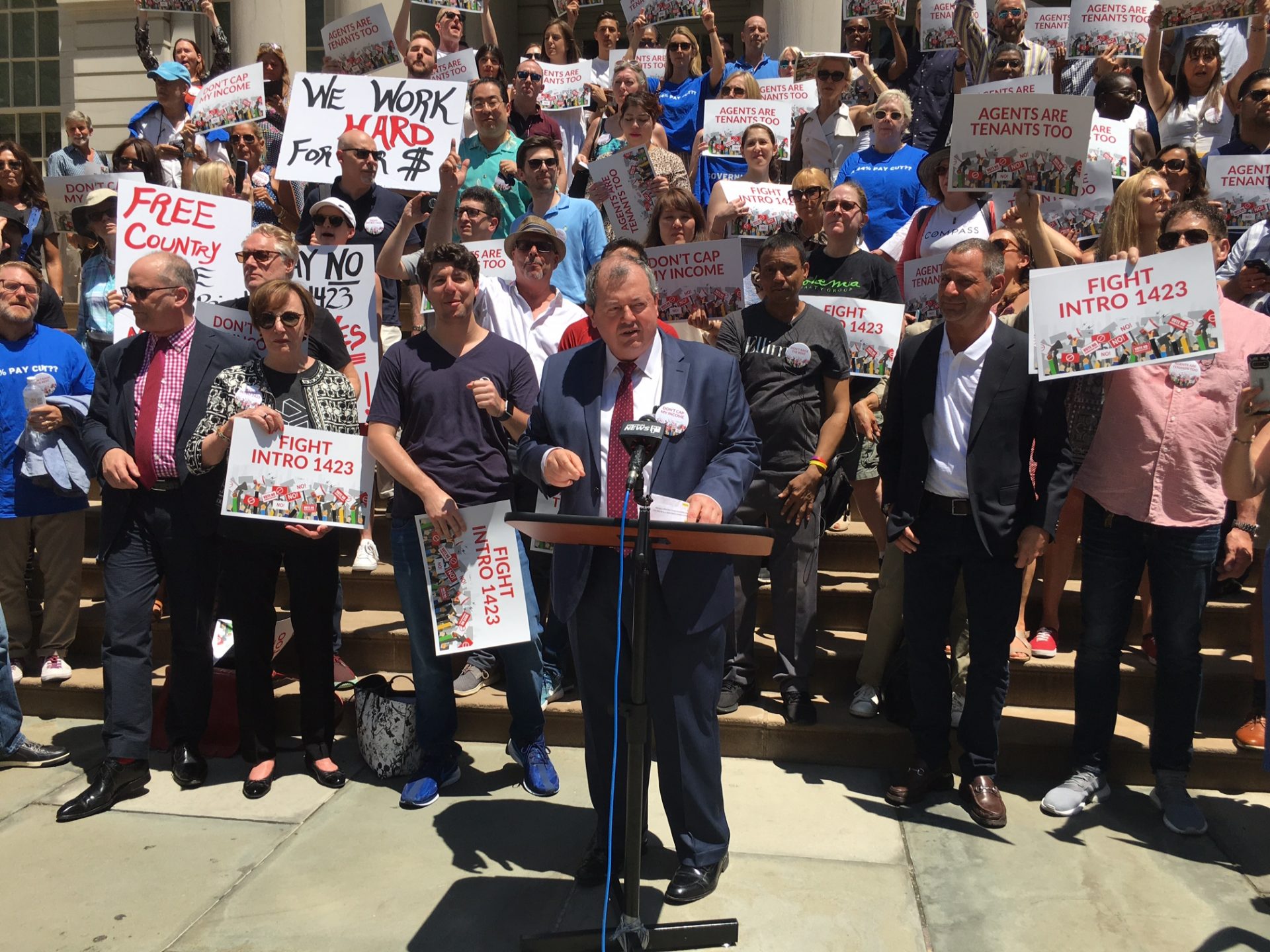 Hundreds of brokers and others working in real estate rallied outside City Hall on Thursday to protest legislation aimed at limiting the commission a tenant has to pay for getting a lease signed to one month’s rent.

Despite the temperature soaring to over 90 degrees, protesters stood outside chanting, “Trash the cap!” and carried signs saying “Don’t make brokers broke” and “Regulate your income, not mine.”

The bill, sponsored by Council Member Keith Powers, was part of a package of legislation by Powers and Council Member Carlina Rivera, both of Manhattan’s East Side, aimed at lowering upfront costs paid by tenants when signing a lease. They included capping security deposits at one month’s rent and getting tenants speedy returns of security deposits.

However, it was the broker commission bill, Intro 1423, that drew out the protesters, most of whom weren’t allowed inside the gates of City Hall for a rally or hearing, because of concerns over crowd control.

Initially the bill sought to cap commissions at one month’s rent, reasoning that commissions of the roughly standard 15 percent of the annual rent on top of other costs like security deposits and other fees for applications and background and credit checks are gouging tenants. Powers, at the hearing, mentioned a constituent whose upfront moving costs due to the fees ending up costing him $15,000.

However, in response to concerns from the industry, including the fact that most agents have to split commissions with companies and often again with other agents, the language of the bill was changed. The amended version states that the tenant would only be responsible for paying one month’s rent, though the broker or agent could potentially collect the rest of the agreed upon amount, if higher than that, from the person who hired him or her.

The bill only applies to agents representing property owners, not those hired by tenants. While not in the legislation, Powers has also suggested, as an alternative, having commission be split evenly between landlord and tenant.

But the Real Estate Board of New York has slammed the legislation, calling it overreaching. Former REBNY President John Banks said at the time, “Clearly this legislation is an overreach and is a first step to other commissions potentially being regulated by the City Council.”

Brokers at City Hall argued that they didn’t think passing the cost of commission onto a landlord would work, because few owners would agree to shoulder any additional costs following the sweeping changes in state law that have limited how they can raise rents.

“After everything in Albany, there’s not a landlord who has discretionary revenue to pay for marketing,” said Douglas Wagner of Bond Real Estate.

And even if they did end up ponying up, he warned, owners would just pass the costs onto the tenants anyway in their rents, making future increases even higher due to the initially higher base rent. This prompted some chanting of, “Don’t raise the rents!”

He then turned the mic over to brokers and agents, who said they often work for weeks or longer with no guarantee they’ll even get paid and that they cover the costs of their own healthcare and advertising.

Once inside the City Council chambers for the hearing, one of the speakers was Assembly Member Inez Dickens of Harlem, who’s an owner of a few buildings in the community as well as being a broker.

“When a fee is charged, it’s split between a broker and a salesperson,” said Dickens. She also said the bill will have a negative impact particularly on brokers with smaller companies who tend to work for smaller owners.

“The big companies have in-house brokers; these are all small brokers,” she said while gesturing to the people in the chamber. Dickens added, “I don’t know if it’s constitutional for a government entity to determine how much a person can make. The banks nearly took down this country and no one determined what they can charge. We’re just focused on hitting and targeting the real estate industry. I’m looking at my small brokers, my small owners. The ones who really work in the community. They’re not making a lot of money.”

In response to the concerns of the speakers, Powers maintained that paying for their services was an owner’s responsibility.

“Landlords should pay for the people they hire,” he said at one point in the hearing. “It should be paid by the person who put you into the transaction.”

Others who gave testimony included Sarah Mallory, chief of staff for government affairs for the New York City Department of Housing, Preservation and Development (HPD), who said the agency supports “the intent” of Intro 1423. However, she added that the department wanted to review the language to see how it interacted with state law.

Tenants at the hearing said they supported the bill as they spoke about the scarcity of no-fee listings as well as upfront fees an owner can arbitrarily ask for on top of already high rents.

Attorneys from the Legal Aid Society said the bill would help people at risk of homelessness and others transitioning from homelessness who just can’t afford high upfront moving costs.

The attorneys testified that even when tenants are eligible for some kind of assistance with upfront fees, landlords aren’t always willing to wait for the applications to be processed when they can rent to someone else who has the cash on hand.

Attorney Robert Desir said Intro 1423 and others in the package “will go a long way in ending some of the barriers they face.”

Ava Farkas of Metropolitan Council on Housing, said, “We’re not in a fair market. Right now in the city the cost of moving, when you hire a broker the cost becomes prohibitive.”

Coveted retail corner on Upper West Side offered by Compass