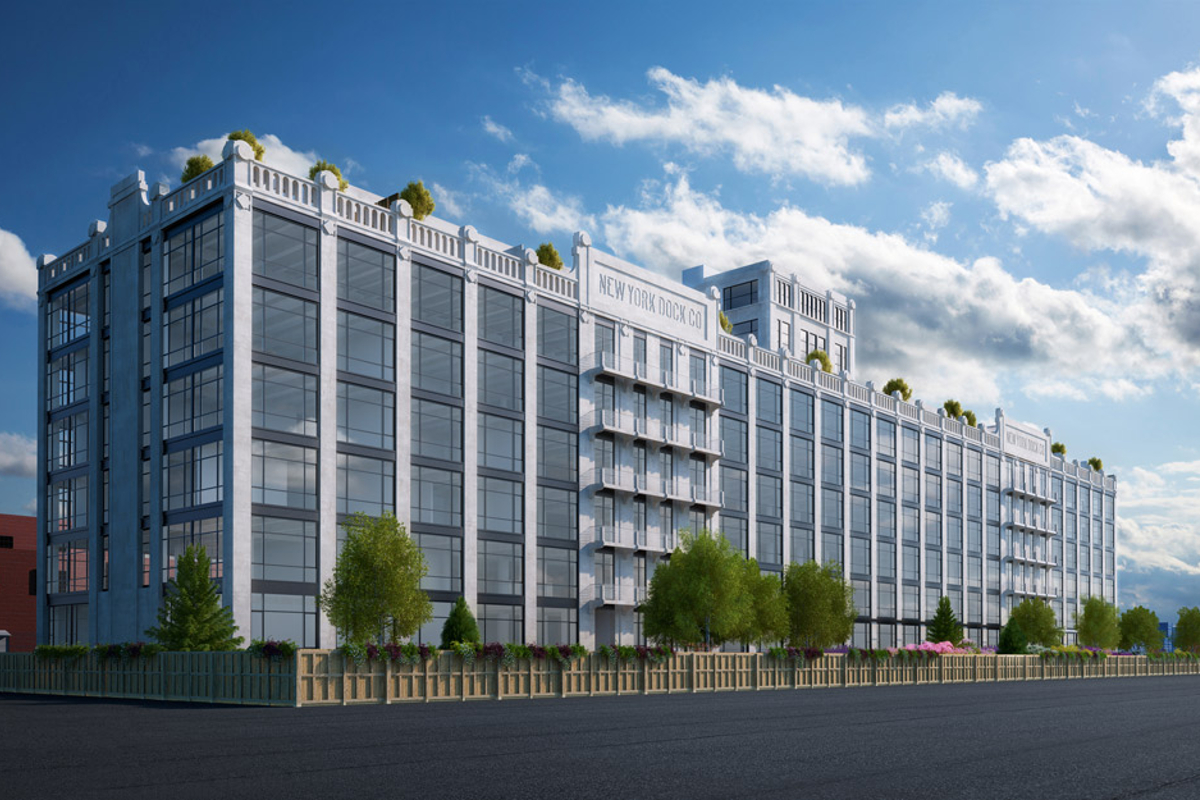 On a recent Sunday afternoon, during a day of near-perfect weather, Hometown BBQ, a popular restaurant in Red Hook, Brooklyn, was packed with groups celebrating birthdays, families with young children splitting platters of brisket, and friends watching soccer games on a large pull-down screen in the dining room.

This is not uncommon in the neighborhood, which has been a popular weekend destination for Brooklynites for years.

Despite the popularity, it has managed to stay somewhat under-the-radar and retained its sleepy village-by-the-sea charm, most likely because of the nabe’s lack of decent transportation and housing stock.

But with a slew of planned residential projects underway, Red Hook is poised to finally be the next big “it” neighborhood.

One of the biggest draws to the area is the massive 346,000 s/f IKEA store right along the water in Red Hook. There’s even a ferry visitors can take from Manhattan that drops you right next to the Swedish retailer.

Fairway Market (which recently filed for bankruptcy) is one of the neighborhood’s only grocery stores, but it has a great foodie reputation.

Hometown BBQ, which opened in 2013 on the neighborhood’s main drag, Van Brunt Street, has been named one of the city’s best BBQ spots by several different guides and publications.

Just next door there’s Brooklyn Crab, a tri-level seafood restaurant and bar which boasts a sprawling roof deck and offers games like mini-golf and cornhole.

And just around the corner from Brooklyn Crab is one of Red Hook’s oldest institutions, Sunny’s Bar, the beloved neighborhood watering hole that first opened in the 1890’s and was originally a dive for longshoreman who worked at the nearby docks.

One Liberty Warehouse, located directly on the water’s edge at the end of Conover Street, was first built in the 1850’s and has now been converted into a 15,000 s/f event space and popular destination for weddings, but it’s not cheap — the venue goes for north of $50,000 per event.

In 2013, power couple Jay-Z and Beyonce rented it out to celebrate the release of the rapper’s album Magna Carta Holy Grail.

With such strong draws from retail and restaurants, it’s no wonder developers have taken notice. In the last two years, several new developments have begun to rise in place of former warehouses and crumbling buildings.

One of them, 160 Imlay, the former New York Dock Building, is being developed by Est4te Four and marketed by Patty LaRocco of Douglas Elliman.

The 70-unit luxury condo building near the waterfront is slated to be finished next Spring, and according to Streeteasy, all of the forthcoming building’s units are under contract, with an average price of $1.8 million.

Real estate firm SANBA is developing a collection of 22 townhomes called King & Sullivan on King Street. The three-story, four bedroom modern townhomes are listed (also by LaRocco) for between $2.65 million and $2.95 million and will feature luxury finishes and views of Lower Manhattan.

The design of the homes was inspired by Amsterdam’s Eastern Docklands development, where each homeowner was encouraged to stamp their personality on their property by selecting a different architect to design it.

“The typology of the townhome is in large demand because of its human scale and because it reflects a very comfortable and independent way of living right in the middle of New York City,” said Aldo Andreoli, founder of the architectural firm AA Studio, which has designed the 22 homes, in a press release.

“The townhome is a perfect compromise between the suburban single-family homes and the urban density of small condominiums.”

A three-story residential building is rising on Van Brunt Street at Visitation Place, developed by Cheever Development Corporation. The formerly vacant lot will house 19 apartment units once completed, with a total square footage of 18,089 s/f.

And according to building applications filed with the city, developers filed permits in December to build a five-story, 19-room hotel at 411 Van Brunt Street.

One of the main reasons Red Hook has been slow to develop more residential is the high cost of land, something that’s a problem for real estate developers in every part of New York City.

“It’s hard for Red Hook, we have some challenges,” said Victoria Hagman, founder of residential brokerage firm Realty Collective and a longtime resident of Red Hook.

She pointed out that the only available sites tend to be vacant lots, where developers have to start from scratch, and with the cost to build so high, it’s not as attractive to potential builders.

However, the area is still popular with renters and buyers and prices have risen in both rentals and sales, despite the lack of inventory the area offers.

And with a high-demand for luxury product in the neighborhood, many longtime owners are looking to cash in, and have put their homes on the market, said Hagman.

“There’s definitely been a big change,” she said about prices rising in the last five years. Hagman recently had a client sell a home for $1.87 million after listing it for $1.9 million, and she just rented a townhouse at 370 Van Brunt Street for $8,000 per month.

Streeteasy lists the average rental price for Red Hook as $2,500 per month.

Red Hook even has a new school, BASIS, a private school located on Columbia Street in the heart of the neighborhood. The $40 million, 90,000 s/f K-12 school just finished its first school year.

“It’s like a small seaside village, it’s seasonal,” said Hagman. “People like to come on weekends or for a staycation, go home, and feel like they got away.”