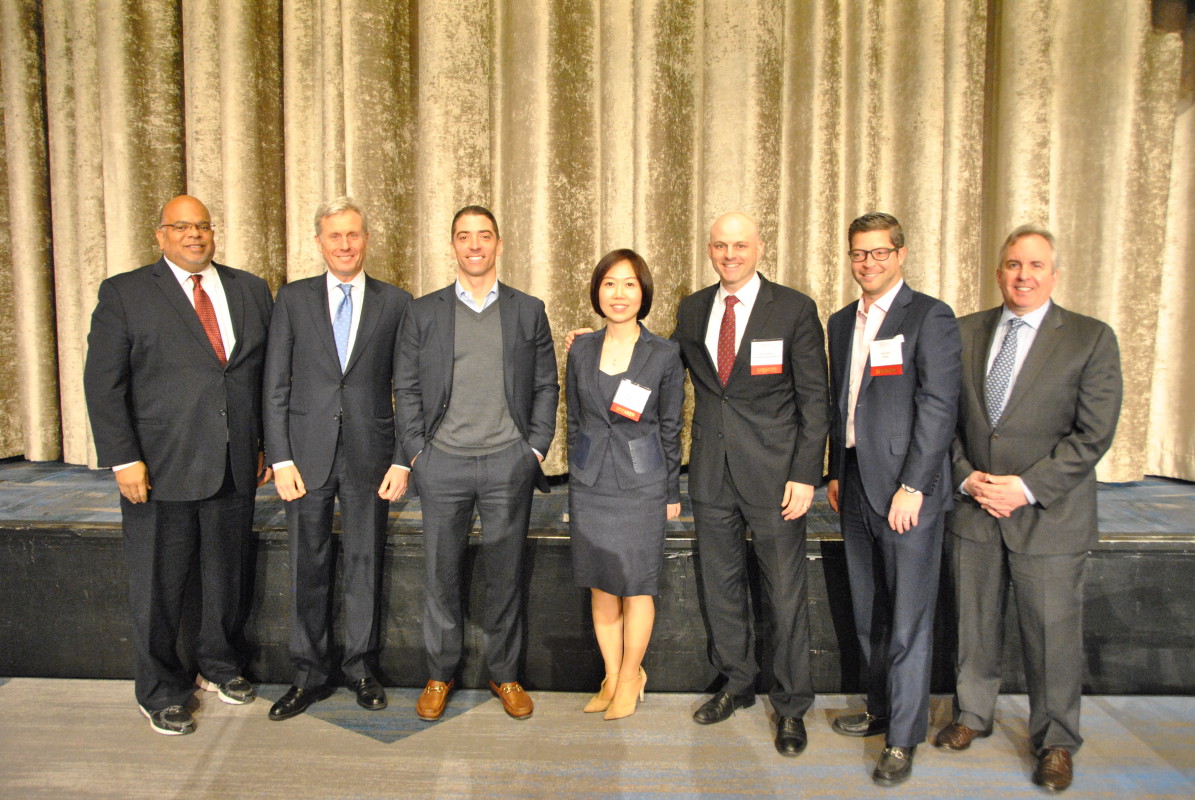 The final weeks of 2016’s opening quarter, saw REBNY host its members’ luncheon at the New York Hilton Midtown last Tuesday. With spring on deck and 2016 in full swing, the practice of reflecting on 2015’s success began to cede more ground to a focus on the current year.

“Before we even start to talk about where we’re going in 2016 in the New York City real estate market, it’s really important to understand where we have been,” said moderator Ron Lo Russo before introducing the members of the “New York City Market Forecast – Where Are We Now?” panel.  Lo Russo, executive vice president at Cushman & Wakefield led Helen Hwang of Meridian Investment Sales, LLC, Hal Stein of Newmark Grubb Knight Frank, Chase Welles of SCG Retail, and Sacha Zarba of CBRE, Inc in a discussion of 2015’s success and where the momentum will take the local market.

He pointed to a significant rise in job growth for the city-681,000 new jobs since 2009- and last year’s 101,000 job bump-the third consecutive 100,000 plus spike- as signs that the real estate market was enjoying robust health.

Lo Russo credited growth in the TAMI, education, and healthcare sectors as upward drivers of value.

While several other variables were discussed, both Hwang and Welles touched on the importance of global impact early on.

“Looking at 2015, we had the most amount of volume in the sales markets in the history of New York City,” Hwang said.  “We had $54 billion worth of transactions in New York City. Compare that to our last peak which was 2007at $49 billion. It was a tremendous year for us.”

Hwang said that roughly 25 percent of the market was led by institutions and pension funds, credited about 30 percent to private equity, and allocated much of the rest to foreign activity.

“There was tremendous activity from the foreign side and that will continue,” said Hwang pointing out a “drastic” jump in Chinese investment.

On the flip side of last year’s fortune is a potential correction during the current year. Hwang says a duplicate performance from overseas investors is far from a lock.

“2016 feels a little different. A lot of the mega transactions that took place in 2015, I think a lot of those guys are now sitting on the sideline,” she said. “They’re on the fence about the market because there’s a lot of volatility.”

In terms of the retail sector, perhaps a local and compact-scale view may be the best route for investors.

“There’s caution in the retail market in certain submarkets, many of them very close to this hotel (Midtown) in particular,” said Welles while mentioning Fifth Avenue and SoHo.

“On the other hand, Brooklyn and neighborhoods in New York are very active, very busy with daily needs retailers.”

Welles said that many local retail markets are enjoying low vacancy rates and elevating rents, thanks in large part to daily needs suppliers.

Outlets dealing in more significant, grander purchases may need to weather exchange rate uncertainty in the coming months. This is not an issue significantly impacting the sale of everyday items.

Saying that gyms and fitness outlets are “tearing it up,” Welles said the submarket for grocery stores and other smaller purchase vendors “will continue to expand.”