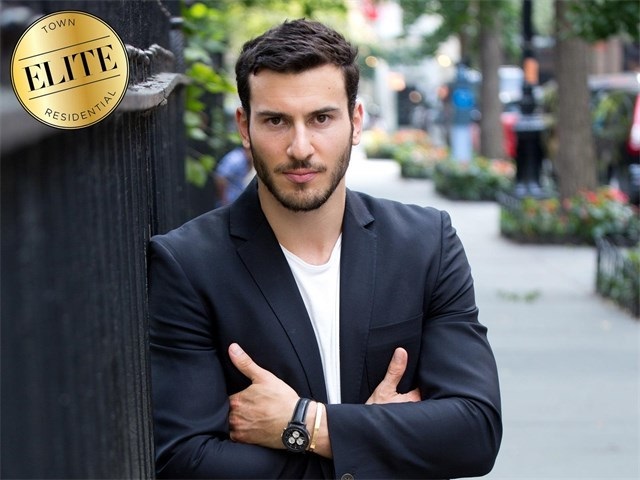 You may recognize him from the all-star cast of Bravo TV’s Million Dollar Listing: New York (Season 6), but Steve Gold’s successful career path came as a result of self-determination, hard work and a diverse team that share the same drive and passion for the business as he does.

In just a few short years, he has fast become a household name in the luxury residential real estate market, especially in New York City.

The 33-year-old founder and president of The Gold Group at TOWN Residential added Circa Central Park at 285 West 110th Street to his portfolio last year, spearheading a $141 million sellout of 38 residences at the luxury, ground-up condo development on the northwest corner of Central Park.

While 2017 may have ushered in a new wave of mainstream success, Gold admittedly never planned for a career in real estate, but at least as far back as he could first read the Mansion section of the Wall Street Journal, he visualized himself within those homes until he made those dreams a reality.

Now, the Stamford, Connecticut-born athlete, sailboat racer, and former model owns one of those luxury residences in the Hamptons as a result of running one of the most successful teams at TOWN.

He started his career with Brown Harris Stevens, and with a tireless work ethic, and a network of global contacts, he set his sights on luxury sales.

In 2011, Gold represented the buyer of a $5 million townhouse at 54 King Street in Soho, his first multi-million dollar deal. In 2012, he shifted his focus to becoming a listing agent and secured his first exclusive luxury listing at 300 West 14th Street, a property he quickly sold. From there, his success has flourished.

He moved to TOWN in 2015 and has since broken his own record for volume of sales time and time again, doubling his business over the last seven years.

“Long before Steve became known through Million Dollar Listing New York, he was a consistent Top Five producer at TOWN,” said Andrew Heiberger, founder and CEO of Town Residential, a residential real estate brokerage based in Manhattan. “He is an industry veteran with an exemplary work ethic and level of integrity; truly deserving of all of his success, and then some.”

While Gold is capable of taking on many projects and thrives when multi-tasking, he has built a strong seven-person team who support him every step of the way.

His recruitment strategy is to identify those with diverse backgrounds like Gold himself. His team, among others, consists of a former banker, a hometown hair stylist and an old high school friend.

“People come into this industry when they have a change in their life, want to do something different or aren’t quite happy at their current job, myself included,” said Gold.  “I hire people that have that kind of story because I can relate and want to help.”

“But one important common thread is that they are hungry for success, are hard-working and have a passion for business. It’s a 24-7 job, and if you don’t love what you do, then you won’t succeed. That’s what it takes to be on the team.

“I started from ground up. I came to New York without knowing a soul, and built a business from scratch. Anyone can really do it with a positive mindset and friendly attitude. Put your mind to it, and never burn any bridges. Focus and hard work will get you far.”

Veteran real estate developer Mark Fischler, owner of Fischler Properties, who has worked with Steve on various projects, said:  “Steve’s good character stems from solid morals and values. I have worked with hundreds of real estate agents throughout my career in this industry, and Steve’s authenticity, honesty, loyalty, trust, and dedication are qualities that make him shine. He is always available when you need him. He is someone I can depend on to join a conference call at three a.m.with Chinese investors, and then show up at an eight a.m. meeting the next morning. He answers my emails at lightning speed.

“Steve also understands the New York City market, the domestic and international markets better than anyone in the industry. His success is without a doubt directly attributed to his hard work ethic. He is destined for great things.”

As far as his 2018 real estate outlook, Gold and his team share a healthy perspective of the market.

“There are a lot of sellers right now still pricing for yesterday’s market, which is hurting them in the long run,” said Gold.
“Buyers don’t have a sense of urgency in 2018. They’d rather wait because they feel there will be other similar options. The lack of buying urgency coupled with improper pricing is leading to more supply than demand. But if you’re a strong broker, this brings opportunity because you can find certain properties that may have been overlooked that will trade for less than they should simply because they have been on the market for too long.”

As for his future plans, Gold is looking to expand his business beyond New York City.  He is currently listing a 443-acre property in the Catskills, working on co-listing one of the largest waterfront properties in his hometown of Stamford, CT, and is in discussions to build a second team down South.

“I love architecture and design, the whole process, and truly love what I do,” said Gold. “I also have a lot of other creative interests, including hotel development. I’m excited for the future.”

For aspiring brokers, Gold has this piece of advice: “Stay persistent and don’t give up because in this industry, it takes time. You won’t make a lot of money in the first year or two. You’ll have down moments. The highs are high and the lows are lower, but understand that it’s all about building something bigger. Be patient and continue to work hard and don’t get discouraged. This type of mentality is what makes a good agent.”

As for the future, Gold is tight-tipped on his television career.

“MDLNY has been an incredible experience,” said Gold. “While I can’t confirm or deny another season, I can say that I am grateful to Bravo, and our production company, World of Wonder, for the opportunity. I have a lot of respect for what Fredrik [Eklund] and Ryan [Serhant] have accomplished.

“While it hasn’t always been smooth sailing on the show, at the end of the day, our common bond is strong enough to overcome any conflicts that we’ve encountered along the way.”