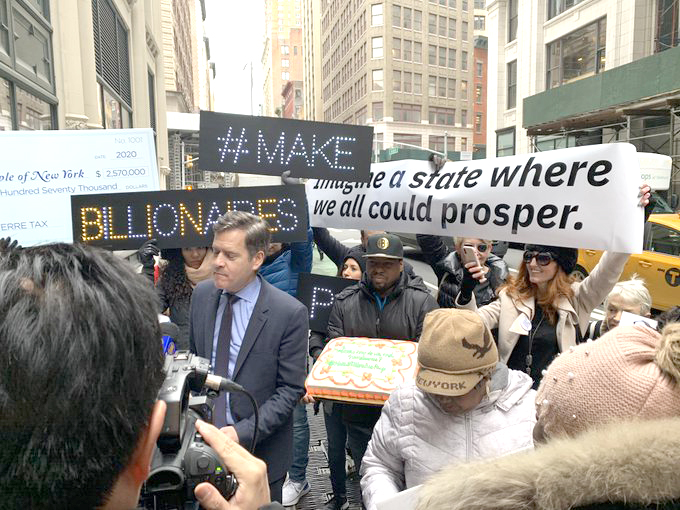 The protest at 212 Fifth Avenue aimed to highlight the $2.5 million Bezos would owe the city if a proposed pied-a-terre tax goes into effect.

Activists displayed a large check from Jeff Bezos to the “People of New York” for $2.57 million, and brought a giant talking Alexa. They asked Alexa, “Can @JeffBezos afford to pay the pied-a-terre tax?” She answered, “Of course, he’s one of the richest people in the world.”

Hoylman is lead sponsor of a bill in the New York State Senate to create a pied-à-terre tax.

His bill is one of several that New York State Senate Democrats are advancing this year as part of a progressive revenue package that they say would raise more than $30 billion annually from New York’s billionaires and wealthiest residents.

“He even owns the largest mansion in Washington DC, where he recently hosted Ivanka Trump, Jared Kushner and Trump Administration leaders at a lavish party,” added Hoylman.

“If Bezos can afford all those properties, he can surely afford to pay his fair share in taxes on residences in New York City.”

Michael Kink, a leader of the MakeBillionairesPay campaign and Executive Director of the Strong Economy for All Coalition, said, “The pied-à-terre tax is aimed directly at New York’s worst-in-the-nation inequality: hundreds of vacant luxury penthouses, 92,000 people living in shelters or on the streets, and 112 billionaires who aren’t paying their fair share. It’s time to tax billionaire wealth — including their second, third, fourth and fifth homes — so New York can build homes for people who really need just one.”

The Real estate Board of New York has spoken our against the proposed tax on second homes avlued at over $5 million.

He said the residential real estate brokerage industry would also be severely impacted as the tax put a dent in deals.

The board has warned that the move could also prompt existing owners to convert their condominium units to rentals, thus flooding the rental market.

“Before enacting a new tax that would do more harm than good, everyone should take a step back and consider that this additional tax would suppress economic activity and lead to lower tax revenue for the city,” said Whelan.