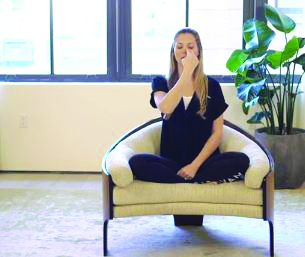 With the entire state of New York now under coronavirus lockdown, the closing of society has also oozed its way indoors, shuttering common areas in buildings like gyms, lounges and co-working spaces.

With residents stuck at home, landlords and building managers have been turning to technology to try to give tenants a sense of community in the era of social distancing.

Finding community online
Before the pandemic changed the way people live, LIVunLtd, an amenity/concierge provider, typically organized around 150 events every month, from author readings to comedy nights, in addition to roughly 2,500 fitness classes.

While all this has stopped, Michael Fazio, the creative director at LIVunLtd, said his company has tried to fill the void by keeping residents informed of what options they do have for fun and necessities while sheltering in place.

They’ve published a guide on things to do online, like virtual museum tours and brain games to keep the mind active.

They also worked with a PR firm to put together materials on which restaurants were delivering.

He arranged virtual cooking classes and, after residents began inquiring about personal trainers, LIVunLtd found that some fitness classes could still work virtually.

LIVunLtd services over 200 buildings although its employees are only physically onsite at 72. The rest have always been virtual connections.

“We started as more of a virtual service, so we’re returning to our roots,” said Fazio, on COVID-19’s impact on business.

The residents of 525 West 52nd Street are “especially active” in terms of this type of amenity, which Fazio thinks may be because it’s a rental.

“I think people renting may be between homes or new to New York, and open to this communal idea,” he said.

LivUnLtd has researching what services would be appreciated in various buildings based on the company’s past experience tracking which offerings have been popular and where.

“So we know in this building no one shows up for boot camp but we always reach capacity for mindfulness yoga,” said Fazio. “So there we would do more lectures than comedy because there’s a cerebral vibe.”

And of course, residents are always asked for their feedback later.

“People are receptive to that because it’s their home,” said Fazio. “If they want documentaries and not family films, we listen. Residents haven’t been asking us to get a psychologist for them on dealing with being with their spouse 24/7, but we’re trying out things that might be useful to show we care and that we’re thinking about them.

“They’re leaning into us, but they haven’t said, ‘I want to have a virtual cooking class.’ They’re not thinking about it but we are because we think everyone wants an escape.”

Fazio also believes the communal feel is still something residents are hoping for.

“People aren’t gathering because of coronavirus, so we have to allow them to gather virtually. It’s not about an independent experience which are most digital experiences. We’re trying to make it the talk of the building. It’s different than logging into yoga.com and taking a class. That’s what amenities are built for.”

Prioritizing resident safety and wellness
At the four condo buildings owned by Magnum Real Estate Group, communal spaces like gyms and playrooms were closed far ahead of the government requirements to do so.

Rooftop decks have remained open, but access is now only allowed by appointment so there won’t be more than 10 people at a time.

Jordan Brill, partner at Magnum, said the company has been prioritizing safety while taking a less is more approach to the idea of maintaining community.

In Brill’s view, residents are already doing this on their own, keeping watchful eyes on one another’s crafts and cooking on social media.

“Our focus is making sure that they know everything that we’re doing,” said Brill. “Sometimes it’s daily. Sometimes it’s weekly. This is a very fluid situation and they appreciate that. They’re still staying in touch. There’s definitely a sense of community that maintains itself.”

But in addition to issuing important updates on the virus as information becomes available, the buildings have still been able to offer residents some normalcy through a program of virtual wellness classes.

“It’s so busy moms and others can take a breathing or meditation class, body sculpting, yoga, pilates, without leaving their homes,” said Brill. “It’s all done virtually. There’s an app and a website with a menu of options and an instructor within each department.”

While Caravan was popular from the start, participation has unsurprisingly spiked in the past couple of weeks.

“I have a feeling this will continue beyond the disaster,” said Brill. “At 196 Orchard, there’s an Equinox flagship, which is obviously now closed but we have that program there, too.”

Meanwhile, with residents stuck home 24/7, he also suspects the global pandemic will factor into people’s choices the next time they need a new place to live.

“I think that as this winds down and there’s a new focus on acquiring homes, they’ll be mindful of a place that offers them everything,” said Brill.

“At buildings like 100 Barclay, we’re selling a lifestyle so they won’t have to run from place to place. I think that has a huge appeal.

“Being confined to an apartment in Manhattan is not easy. but our residents feel very fortunate that they’re in that building right now.”

“It’s to prevent eviction, prevent churn,” said Justin Walker, director, business development and media for Rainbow. “There are costs that go along with that, legal fees, bad debt, concessions to a new tenant. So we focus on longterm employment, focusing hyper-locally on what the needs are.”

Many of the organization’s utilize the services to comply with stipulations of community givebacks in exchange for low income housing tax credits, but according to Walker, there has been heightened interest lately in the program from developers of workforce housing.

“It’s very much treated like an amenity because the services keep tenants happy,” Walker said. “It doesn’t have to be mandated by a state agency.”

Meanwhile, many of the services Rainbow offers have also been available through a virtual model for some time. They include online classes that range from job training to walking individuals through the process of applying for jobs or benefits.

The platform for this, called Link, can also be used through a mobile device as well as a computer.

“So we can deliver programs literally to the palms of heir hands,” said Walker. “We have a video-on-demand library because we understand not everyone can be there at 1:30 p.m. And we’re providing privacy because not everyone wants to sit in a classroom and say, ‘I don’t know how to balance my budget’ or ‘I just lost my job.’”

Since the global spread of coronavirus, Rainbow has been concentrating heavily on outreach to elderly residents.

“We’re fighting isolation in our senior community, because they’re particularly vulnerable at this time,” said Walker.

Plugging in at the office
Yet another population in need of a virtual hand during the COVD-19 era are workers who are still going into an office.

Clinton Robinson, co-founder of Lane, a proptech firm that digitizes office operations, said that during this pandemic, commercial landlords should be, above all, make sure their tenant companies are able to work safely.

Along with keeping a building clean and sanitized, this can also include providing technology that enables tenants to book services through an app on their phones or computers rather than with an another person at a front desk. It can also include keyless entry that can be accessed through a mobile device.

“So you don’t have to touch and interact with things,” said Robinson. “We’re removing that need to be there physically.”

And, like at residential buildings, keeping tenants’ overall health and wellness is also important, Robinson said.

In the 160 buildings serviced by Lane, including 15 in New York, tenants have still been able to take part in communal fitness classes that are now being offered virtually throughout the crisis.

“You can join in if you’re working in the office or working from home and you can do a stretch, do yoga,” said Robinson.

But while help achieving zen is probably more appreciated now than ever before, Robinson has found that what tenants are mainly looking for at this time is communication from owners.

“A lot of people are checking more frequently to get news and updates,” he said.

His suggestions for owners are to assemble a small, trusted group of well informed consultants to agree on clear and factual information to pass along to tenants based on real-time governmental/public health advisories.

They should also be utilizing technology to pass on this information so that it all comes from one source.

Lastly, Robinson said, they should always provide a way to contact management with questions or concerns.

“A tenant should never feel confused or left with a lack of resources,” he said.

If this is done carefully, Robinson believes such efforts will ultimately be rewarded by tenant loyalty.

“It’s a great opportunity for property teams to be true to their brand messaging, come from a place of genuine concern for their tenants by going above and beyond the built world,” he said.