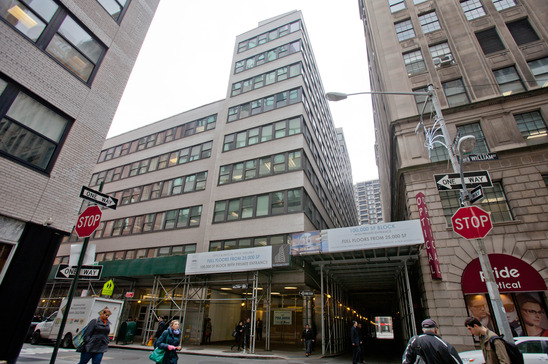 The much anticipated relocation of the Port Authority of New York and New Jersey’s Office of Medical Services to downtown Manhattan’s first ever medical office building is now official.

Billy Macklowe, CEO of William Macklowe Company, reports that the 15-year lease for 8,459 square feet of space comprising a portion of the 4th floor at 156 William Street has closed.

William Macklowe Company and joint venture partner LaSalle Investment Management, which own the 12-story, 250,000 square foot L-shaped property that fronts on Ann and Beekman Streets in the Financial District, acquired the 1950’s commercial building in 2013 and orchestrated its dramatic transformation into a state-of-the-art medical facility over the past year-and-a-half.

Currently located at 233 Park Avenue South, the PA’s Office of Medical Services expects to open its new downtown offices this coming Spring. Brokers Paul Wexler and Josef Yadgarov of Wexler Healthcare Properties represented both landlord and tenant in the long-term leasing transaction. Asking rent was in the low $60’s.

At the same time he was signing up a new tenant, Mr. Macklowe also announced that Riverside Research Institute has renewed its 17,000 square foot lease for the entire 9th floor at 156 William Street. These two transactions bring the building to 96% occupancy. Only two small spaces – 3,000 square feet on the 4th floor and 3,731 square feet on the 8th floor that are being designed and pre-built for medical use remain available for rent.

Richard McBride of Richard McBride Real Estate Services and Craig Reicher of CBRE represented Riverside in the lease renewal while Messrs. Wexler and Yadgarov represented the building’s ownership in the transaction.
The anchor tenant at 156 William Street is Weill Cornell Medical College, which occupies over 85,000 square feet in the building, including a spectacular two-level, 14,000 square foot medical imaging center focused on serving the downtown community.
Mr. Macklowe is not surprised by the strong response to his vision for 156 William Street.

“Given its strategic location across the street from New York Presbyterian/lower Manhattan Hospital and the relative dearth of nearby medical offices to serve the downtown community, we knew that targeting health care tenants was the right prescription for this asset,” he stated.

The Downtown market has been thriving in the past few years – the Downtown Alliance’s Q3 2016 report lists approximately 60,000 residents currently in Lower Manhattan, with a huge surge of residential units about to enter the market; over 4,100 units in 26 buildings are currently in development and planning stages.

In addition, the opening of One World Trade Center, Brookfield Place and the Fulton Street transit hub in the last year have been a huge boon to the neighborhood’s retail and transportation options.
The Downtown Medical Building, (156 William Street,) was purchased by William Macklowe Companies and LaSalle Investment Management in December of 2013 and underwent a significant capital building improvement program including a brand new lobby. With its close proximity to the recently opened new Fulton Street transit hub, 156 William Street has been an especially desired destination for the healthcare community.

Paul Wexler and Josef Yadgarov of Wexler Healthcare Properties have now completed transactions at the building totaling over 180,000 square feet at the building.

There are only two remaining units in the building, ranging from 3,000 to 6,731 square feet.