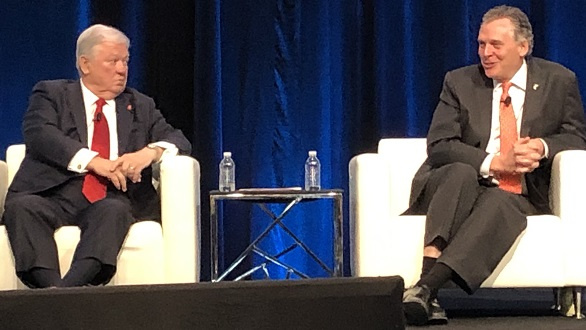 Two of the nation’s most influential politicians have urged Realtors to stay active in local politics.

“I can’t stress to you enough to make sure you stay active in local politics,” said McAuliffe. “Make sure your voices are continuing to be heard, and don’t let them come up with foolish legislation that can in any way impact the real estate industry in a negative way.”

NAR’s 2019 Chair of Federal Legislative and Political Forum Adam Ruiz moderated a conversation with the two men during the Expo.

“The number one issue facing America right now is housing affordability,” Ruiz told hundreds of Realtors and industry stakeholders at the Washington Marriott Wardman Park Hotel. “The vast majority of regulatory costs that influence this issue come at the state and local level.”

Barbour is the former Governor of Mississippi and the former Chairman of the Republican Governor’s Association.

In addition to serving as Virginia’s 72nd Governor, McAuliffe served as Chairman of both the National Governors Association and the Democratic National Committee.

“The idea that the federal government’s solution is going to work everywhere is a crazy idea. The answer to this is in state and local government,” Governor Barbour said.

Ruiz asked Governors McAuliffe and Barbour for their predictions on the 2020 elections, specifically addressing issues that will resonate next year and how the political environment is different today than it was in 2016.

“We talk about Trump, and the biggest piece for him is going to be the economy,” Governor McAuliffe said.

Governor Barbour noted that 18 presidents have run for reelection since 1900, with 13 securing another term. “That’s about 70 percent,” Governor Barbour continued. “If the [2020] election is about the economy, then I think that trend can hold.”

Ruiz asked how Realtors can sure the value of real estate resonates in today’s political environment.

“The real estate business is so powerful in politics because it touches everybody’s lives,” Virginia’s former Governor said. “Everything we do somehow has a connection to the real estate industry.”

PHOTO TOP: Former governors Haley Barbour of Mississippi, left, and Terry McAuliffe of Virginia discussed the role that REALTORS® can have in local and national politics. via REALTOR Magazine