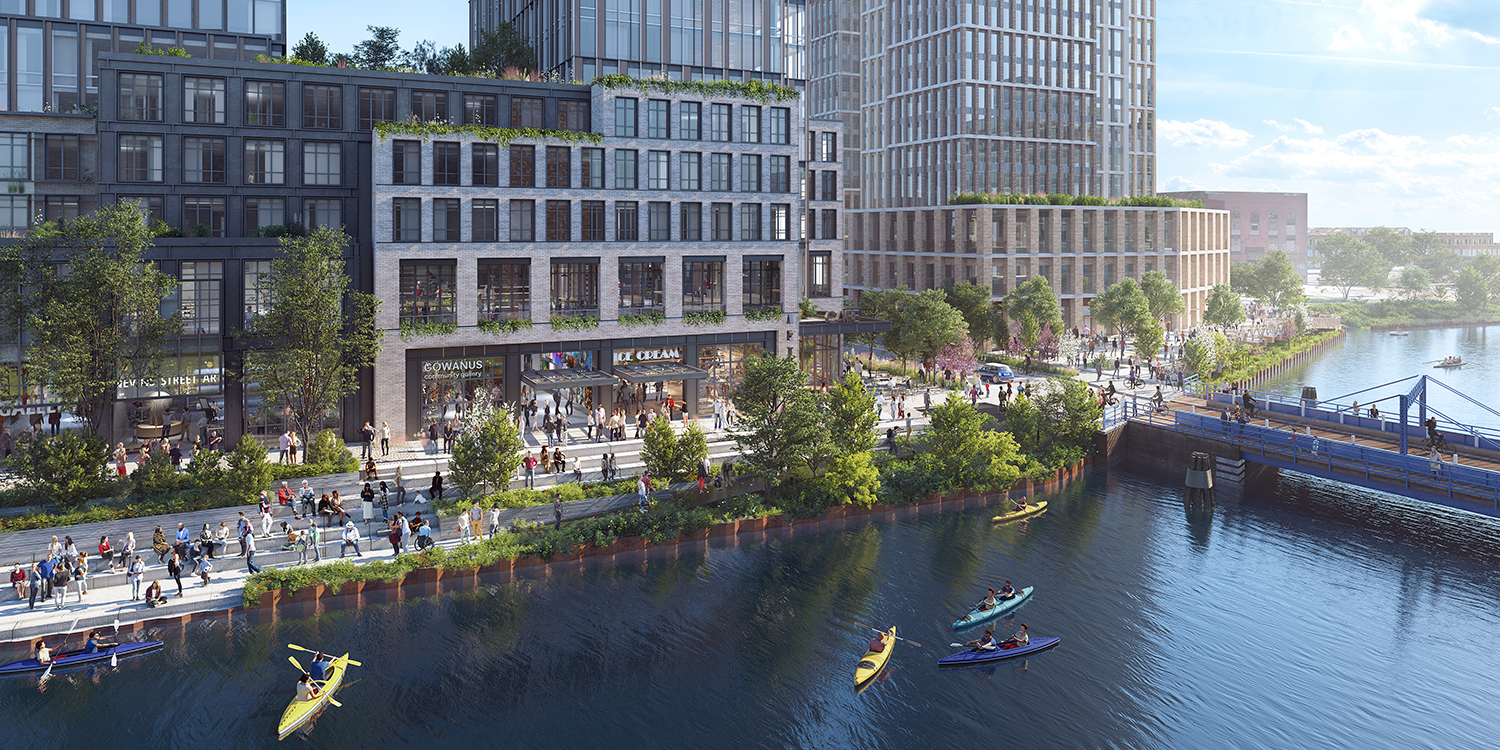 Picture this; Developers ask Gowanus locals to see beyond the muck

A group of developers who own a chunk of polluted Gowanus land has released renderings of what the area could look like if the community gets behind the push to rezone the site.

Domain Companies, Monadnock and PMG – who together call themselves Gowanus Forward – own eight of the 20-acres currently proceeding through ULURP (Uniform Land Use Review Process).

Backed by the city as a way to bring new life to 20 acres along the canal and create crucial affordable housing, the rezoning has been in the works for more than a decade. But it has drawn criticism from local residents who say the area’s sewage system and infrastructure can’t cope with the influx of new residents.

Frank Dubinsky, vice president at Monadnock, however, said he believes that if the community works with developers and the City “a cohesive, resilient, and well-maintained waterfront” would replace land around the canal that has been inaccessible and contaminated for decades.

“The Gowanus rezoning presents a once-in-a-lifetime opportunity to create beautiful, publicly accessible open space along a cleaned-up canal front, desperately needed affordable housing and dedicated space for the artists and makers who have contributed to the neighborhood’s rich artistic and cultural history,” said Dubinsky.

“But it’s imperative that we get this right by ensuring that the open space is cohesive in design, accessible to all, and contributes to the neighborhood’s resiliency.”

As Gowanus Forward, the developers released “conceptual renderings” of their site following ULURP certification for the Gowanus Areawide Rezoning.

Created by SCAPE – the same urban design and landscape architects behind the Greenpoint Library and Environmental Education Center in Brooklyn and First Avenue Water Plaza in Manhattan – the renderings show a walkway, green space and play areas, recreational boating infrastructure and benches.

Pursuant to the proposed rezoning, areas immediately adjacent to the canal, which is undergoing a cleanup in coordination with the Environmental Protection Agency, will be transformed into publicly accessible open space. Additionally, property along the canal would be remediated under the supervision of the City’s Department of Environmental Protection before new buildings could be occupied.

The rezoning will spark the creation of approximately 8,500 new housing units. According to the developers, this would be first rezoning to achieve “fair housing” goals by creating thousands of new units of affordable housing – the vast majority of which will be developed on the waterfront.

The new buildings on the waterfront are anticipated to include over 70 percent of the approximately 3,000 below-market housing units created. The Gowanus Forward property owners also are committing an average of over 25 percent of their sites to the new open space.

The rezoning covers more than 20 blocks, bound by Bond Street to the west, Baltic Street to the north, 4th Avenue to the east, and Huntington, 3rd, 7th and 15th streets to the south. It would allow for apartment towers as high as 30 stories and density mixed-use development around Thomas Greene Playground and 3rd Avenue.