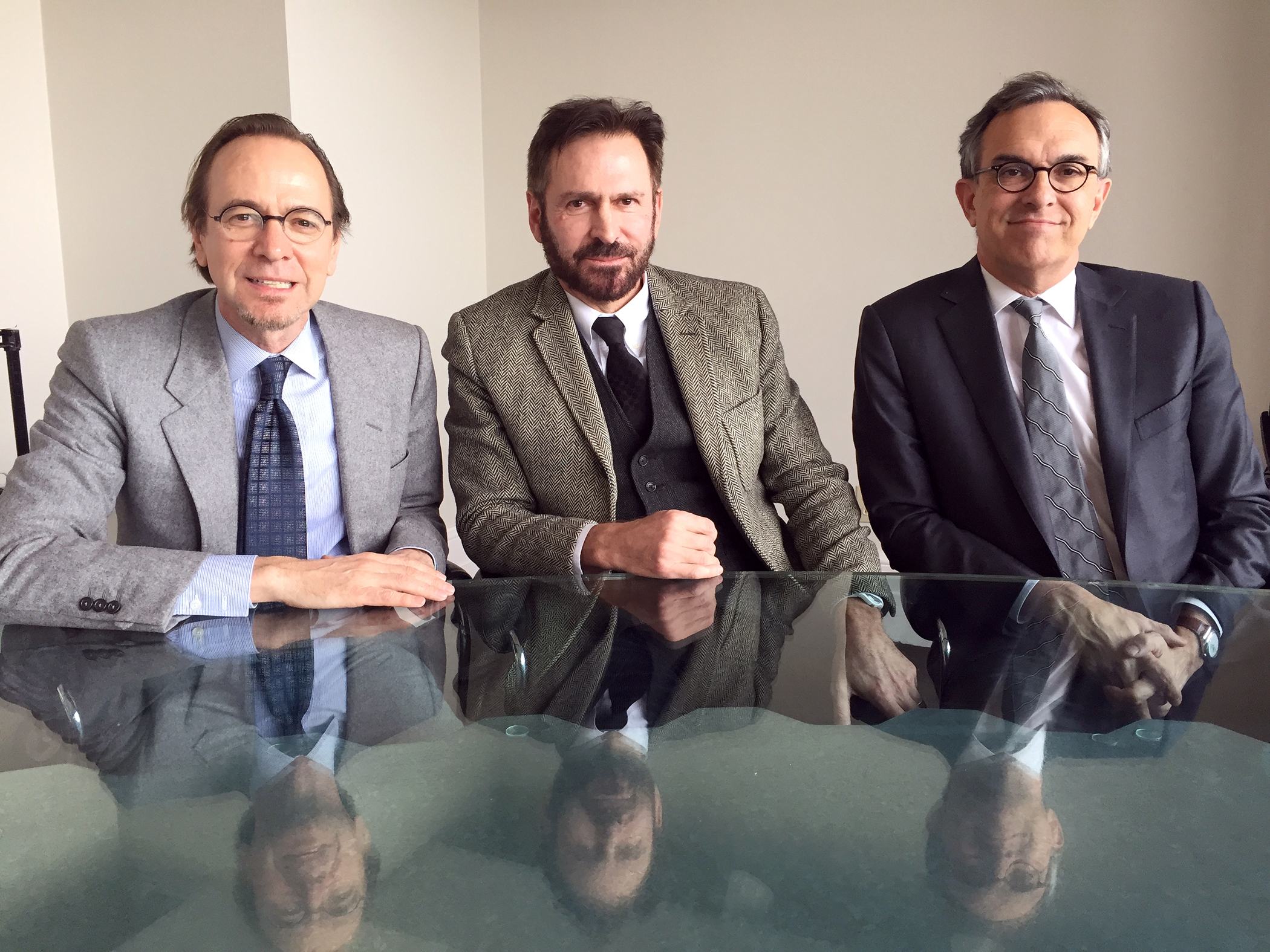 Stern, the venerable architect who founded his firm, Robert A.M. Stern Architects (RAMSA) in 1977, has since grown the company to more than 300 employees. His name is attached to some of the city’s most expensive buildings – the Zeckendorf’s 15 Central Park West, which once set the record for the most expensive apartment sale in NYC, Silverstein Properties’ forthcoming 30 Park Place in Tribeca, and 18 Gramercy Park.

But the names you don’t always see attached to a project, at least front and center, are three men that have spent the last 20-30 years bringing these buildings and many others to life.

Paul L. Whalen, Daniel Lobitz, and Michael Jones, are all partners at RAMSA and co-authors, along with Stern, of the newly-published book City Living: Apartment Houses by Robert A.M. Stern Architects.

“What makes our office different is that we always approach these buildings from an urbanist point of view,” Whalen told Broker’s Weekly at the company’s expansive offices on 34th Street, just around the corner from the newly-opened Hudson Yards 7 train station. The firm has been there since 1990, and has an impressively large architectural library, with more than 12,000 books.

“We’re very interested in how buildings can help a neighborhood. We’d like to think once we put a building in a neighborhood, it is better off than before. That starts at the base of the building, whether it’s beautifully designed retail, or landscaping, or maisonettes.”

“It’s been exciting to build up this residential practice,” said Lobitz. Though most well-known for its luxury residential towers, RAMSA has several other categories of design it works in, including hotels, offices, academic buildings, and museums.

“When I first came this wasn’t happening at all,” said Jones of the residential division. “We were doing single family homes and work for Disney. Then we first started getting work with Related; rental buildings in Battery Park City, then our first condo was the Chatham.”

“It was a scary thing for Related to move into world of condos, they wanted to bring 5th Avenue prices to 3rd Avenue,” said Jones. “And it worked, beyond their wildest dreams.”

As the market changed and evolved, RAMSA’s residential division blossomed.

“I think developers have gotten a lot more sophisticated with the process of selling buildings,” said Lobitz. “This market didn’t so much exist until very recently.”

“They’re so much more confident now, because the market changed so completely,” said Jones, pointing out how sales directors carefully plan the rollout of apartment units, releasing just a few at a time.
The large coffee-table book is rich with images and renderings of 15 buildings that the team has designed since 2001, many in New York City, as well as Los Angeles, London, and worldwide. It’s a book focused entirely on the residential side of the firm’s practice, and the focus on urbanism that the team brings to each project.

But it isn’t the first book – Stern has put out nearly 20 books detailing his work since the early 1980’s.

The idea for the book was something the team had always envisioned, so when it came time to get the book started, they were more than ready.

The team spent 18 months putting the book together, including diagrams, original drawings, discussions about the thought process behind the designs, and notes about how everything came together for a project. Adamant about making sure the building design fits into the context of the particular neighborhood, the team does exhaustive research and studies when approaching a project.

The partners recall working on one of the firm’s most famous buildings, the phenomenally successful 15 Central Park West.

“I was always drawn to movies with Ginger Rogers and Fred Astaire, and I imagined them dancing on the terrace, so this was just a dream,” said Jones.

“It was great because we were all aligned on the vision of the buildings,” said Whalen. “The Zeckendorfs were excited about it, and it was an opportunity to work with a developer with a big enough budget, big enough site, big enough dream, and enough confidence in us in what we wanted to do – which was to take a prewar building and update it so it would work beautifully with modern living.”

The RAMSA team was even able to use the same limestone that was used to build the Empire State Building, from the same quarry that hadn’t been used in a while.

The building boom in the last few years, following the rebound from the economic collapse that brought many construction projects to a screeching halt, wasn’t all that surprising to the team, whom are familiar with the cyclical nature of the real estate business having been in the industry for decades.

Jones argued that the super towers that have risen along 57th Street, which have been met with both praise and criticism, will be something that residents will be happy about in the future, during an inventible downturn – when new construction isn’t feasible.

And as for the architects themselves, do they live in one of the buildings they have designed?

“No, we can’t afford it,” said Whalen, with laughs from the group. But they do live in the same style of buildings, which they say they are all drawn to. Lobitz and Whalen both live in pre-war buildings in Greenwich Village, while Jones lives in a pre-war building in Murray Hill.

Next up on the architects’ docket is finishing up 30 Park Place for Silverstein Properties, 520 Park Avenue for Zeckendorf Development, 20 East End Avenue for Corigin and 220 Central Park South for Vornado.

Front row seat to the evolution of Long Island City