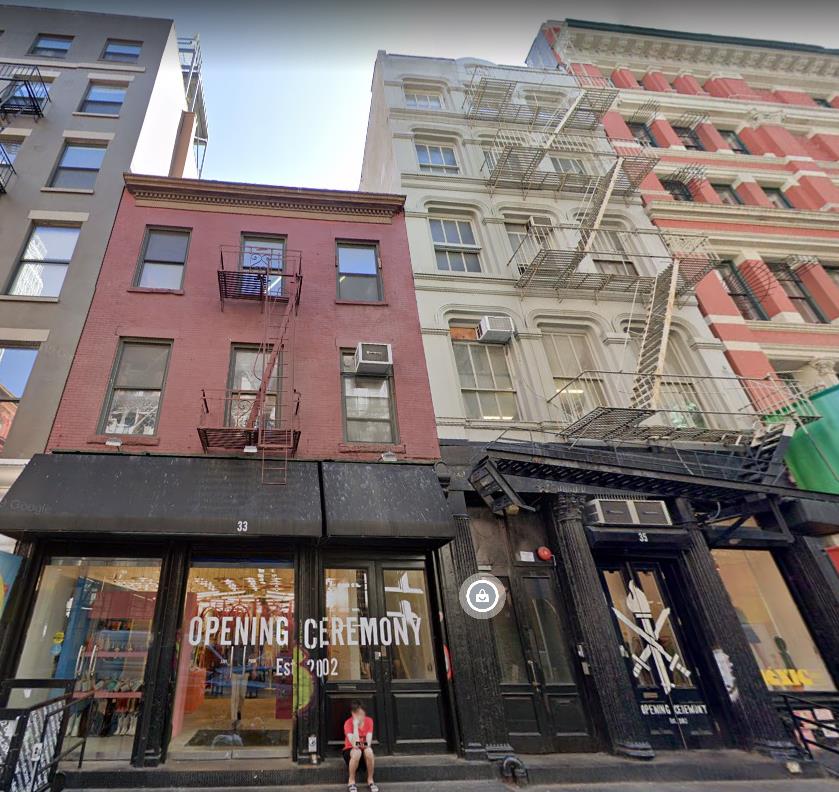 Highcap Group announced that Josh Goldflam, co-founder & principal, along with senior broker Charles Chang, arranged the sale of 33 & 35 Howard Street (pictured top) in Soho for $11,200,000 in an all cash transaction. The seller was the Spitzer Family, which has owned the properties for 45 years, and the buyer was landlord and developer Javeri Capital. The properties are situated on the south side of Howard Street in between Broadway and Crosby Street. The two buildings have 50 ft. of frontage near the intersection of Crosby Street with a total of 16,000 s/f and additional air rights to use for future development. 33 Howard consists of three stories for commercial and retail use. 35 Howard has been used as retail and commercial on the bottom 2 floors and has three residential full floor lofts on floors three through five. The buildings are best known as the former home of popular clothing retailer Opening Ceremony who occupied the entire building at 33 Howard and two lower floors in 35 Howard for nearly two decades. The retail and commercial portions of both buildings were delivered vacant to the new buyer. The upper three residential floors in 35 Howard remain occupied.

•••
Bestreich Realty Group (BRG) announced the closing of 395 16th Street in Park Slope, Brooklyn for $1,950,000. The three apartment multifamily property is located between 7th and 8th Avenue. It’s dimensions are 19 ft by 50 ft and the lot dimensions are 19 ft by 100 ft. It is 2,850 s/f priced at $684 per square foot. It is zoned R6B with an FAR of 2.0 and tax class 1. The seller is 395 16th St LLC and the buyers are 16th Street Holdings LLC. Derek Bestreich, Luke Sproviero, Adam Lobel, Toby Waring, Gabriel Kates, and Daniel Shawah facilitated both sides of the transaction.

•••
GFI Realty Services announced the $9.375 million sale of Timberline Apartments aka 5900 Kinkead Avenue, a 307-unit garden apartment complex, located in Fort Smith, Arkansas. Ohad Babo and Eli Maryl advised the seller and the buyer. The asset totaling 166,329 square-feet, is composed of one, two and three-bedroom units and has 650 parking spaces. The property features numerous community amenities including a basketball court, tennis court and clubhouse. The buyer is a local NYC investor who intends to keep the asset for the long term and invest in capital improvements.

•••
Schuckman Realty announced the sale of 2131 Nostrand Ave. located between Flatbush Avenue and Glenwood Road near the Triangle Junction in Brooklyn. The 4,200s/f, three-story mixed-use building features Optimum as a tenant on the ground floor, a vacant office and two residential units on floors two and three. Baruch Edelkopf, Ari Malul and Matt Colantonio represented the seller, Infinity Collective. Steven Hakakian procured the buyer. The property ultimately sold for $2,300,000, or $547 PSF.

•••
Marcus & Millichap announced the sale of 125 & 127 Webster Avenue, a 12-unit apartment property located the Kensington neighborhood of Brooklyn, for $1,900,000. John Brennan and Samuel Finkler represented the seller and secured the buyer. The package traded at a 4.7% cap rate after being held by the same family for several decades. The two six-family apartment buildings include 12 units, with feature 10 two-bedroom apartments and two one-bedroom apartments.

•••
TerraCRG announced the sale of an industrial building at 189 First Street in Gowanus. Dan Marks, Daniel Lebor and Adam Tannenbaum, along with Jakub Nowak, Jake Torre of Marcus & Millichap and Thomas Cordasco arranged the transaction. Located within the proposed Gowanus rezoning area, the property was acquired by a commercial user looking to continue operating in the area. ABC Collision, an auto repair shop operating for more than 20 years in the area, purchased the property from Advanced JAF Holding, LLC for $3,748,500, which reflects a price of $561 per square foot.
• A 4-unit property at 234 Stuyvesant Avenue in Bedford Stuyvesant sold for $1.75 million, which reflects a 6% capitalization rate at $318 psf. Matt Cosentino and Isaiah Thomas represented the seller in the off-market transaction. The well-maintained 5,200- s/f property contains three residential units, one retail store, and two garages. Eden Ashourzadeh of INK Property Group purchased the property.