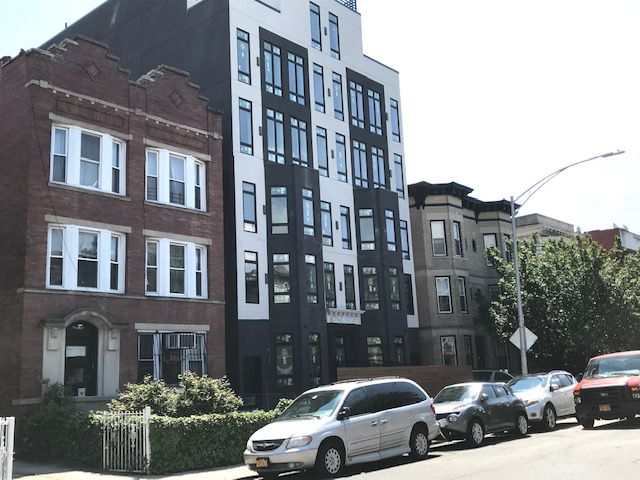 ON THE SCENE: GFI Realty Services has been named the exclusive sales agent for 615 East 17th Street in Ditmas Park

The units, totaling 7,733 square feet, are located on the corner of William and Platt streets in the heart of the city’s bustling financial epicenter. The units feature 50 feet of frontage on Platt Street, 2,453 s/f of street-level retail space and a 5,280 s/f lower level.

Principal and Head of Tri-State Investment Sales James Nelson is marketing the asset on behalf of the current tenant and owner, a religious institution, along with Director Brent Glodowski and Associate Carter Lovejoy.

The retail condominiums sit at the base of a 17-story residential condominium building, just steps from Wall Street, the South Street Seaport and One World Trade Center.

The nearby Fulton Street station is serviced by the 2, 3, 4, 5, A, C, J and Z trains, and the 1, E, R and W trains and New Jersey PATH are available at the World Trade Center.

Cushman & Wakefield has been retained on an exclusive basis to arrange the sale of 975 East 233rd Street, a 5,780 s/f mixed-use site in the Wakefield neighborhood of the Bronx. Asking proce for the mixed use property is $2 million.

The property is within walking distance to the 233rd Street subway station where you have access to the 2, 5 and Metro North trains. Neighboring retail includes Dunkin’ Donuts, Carvel and Subway.

GFI Realty Services has been named the exclusive sales agent for 615 East 17th Street, a six-story multifamily building comprised of sixteen units in the Ditmas Park section of Brooklyn. GFI Realty Senior Director Erik Yankelovich will oversee the marketing of the property, with pricing targeted at $8.5 million.

Constructed in 1931, the recently gut renovated building totals approximately 15,000 s/f; the property was originally three stories with three additional stories recently added to this prewar asset. The apartments are configured as five three-bedroom units, seven two-bedroom units and four studios. The asset offers numerous amenities for tenants including a gym, common roof deck and lounge. The property is near public transit, several parks and a variety of restaurants and stores located along Cortelyou Road and Newkirk Avenue.

The property will have a real estate tax exemption for fifteen years and an abatement for 20 years beginning in approximately one year, which will provide strong protection against potentially large tax increases capping the annual taxes to approximately $2,500 per year.

RM Friedland announced that Marco Lala and his team have been retain for the following exclusive assignments:

Cushman & Wakefield represented ownership in the sale of 280-288 Utica Avenue, a 10,800 s/f mixed-use property in the Crown Heights neighborhood of Brooklyn. The final closing price was $7,325,000 equating to approximately $678 per square foot.

Cushman & Wakefield’s Daniel Abbondandolo and Dimitri Mastrogiannis alongside DJ Johnston of B6 Real Estate Advisors, represented the seller, Jung Kwon of J & Y Utica Corp, in this transaction. The building was purchased by David Bowen and Matthew Wright.

280-288 Utica Avenue is currently leased to a range of merchants and fast food establishments on a long-term basis. The second floor consists of hair stylists and a dental practice and the third floor is to be delivered completely vacant. The property is located steps away from the Utica Avenue Subway Station with access to the 3, 4 and 5 trains as well as numerous bus lines.

NAI James E. Hanson has negotiated the sale of a 67,434 s/f industrial/flex building at 60 E. Halsey Road in Parsippany, N.J. NAI James E. Hanson’s Barry J. Cohorsky, SIOR, and LJ Koch represented the seller, Kent International, in the transaction and the buyer, an equity investor out of Boston, MA, was represented by Transwestern’s Rick Rizzuto and Tim Patterson.

In a market with a constrained supply of industrial product and strong demand, 60 E. Halsey Road represented a rare industrial/flex acquisition opportunity. Spread over five acres with 12,000 s/f of office space, seven 8’x9’ loading docks, and ceiling heights ranging from 15’6”-25,’ the space is well suited to a wide range of users. The building is also situated directly off Exit 40 on Interstate 287 and provides easy access to Interstates 78 and 80 and offers toll-free access to Port Newark-Elizabeth.

The seller, Kent International, is a manufacturer and distributor of bicycles with a sales footprint spanning 20 countries. Kent is planning on relocating their manufacturing operations and engaged with NAI James E. Hanson after other brokerages had struggled to sell the space.

• A 5,000 s/f retail condo located at 8 Jay Street in Tribeca was sold for $5.85 million. Gregory Kim represented both the buyer, Cynthia Rowley, and the seller, Ochre Tribeca LLC. the fashion designer will relocate its corporate office, showroom, and design studio to the new space.

• 1010 Gates Avenue in Stuyvesant Heights, Brooklyn for $2.65 million. This is a 12,716 buildable s/f, 19-unit development site. The existing two-story building that was built in 1952 is 8,400 s/f. It sold for $208 per buildable square foot. Ari Benyacov represented the buyer, 1010 Gates Avenue and the seller, Neighborhood Housing Services of New York City.

• 2109 Tiebout Avenue in the Fordham Section of the Bronx for $585,000. The two-story, two-family home is being converted into 11 units, with the new owners adding two more stories to the current 3,520 s/f to expand to 9,986 s/f. The existing building was built in 1910 and sold for $59 per buildable square foot. Menachem Babayov represented the seller, Harry M. Forman Esq., and Jonathan Bichoupan represented the buyer, Tie 2109 LLC.

• 55 Clifford Place in the Mount Hope section of the Bronx for $680,000. The new owners plan to reposition the two-story, 2,688 s/f property from two units to 16 units. The building was built in 1920 and sold for $253 per square foot. Steven Westreich represented seller, Ready Holdings LLC and Eli Greenberg represented buyer, Asher Leeman, Timberline Management.

RM Friedland announced that it has arranged the sale of a vacant mixed-used building located at 178 West Lincoln Avenue, Mount Vernon, NY, for $780,000. The seller was in the process of getting approved plans for rehabbing and configuring the property into seven apartments and one retail space. The proposed layout included three 3-bedroom units, three 2-bedroom units and one 1-bedroom unit. Plans for the ground floor commercial space included a wheelchair ramp. Marco Lala and his Team Lala of RM Friedland MultiFamily Direct brokered the sale.

The JLL team has announced the following completed sales:

Old Kanes diner in Flushing sold after 50 years for $13.6M