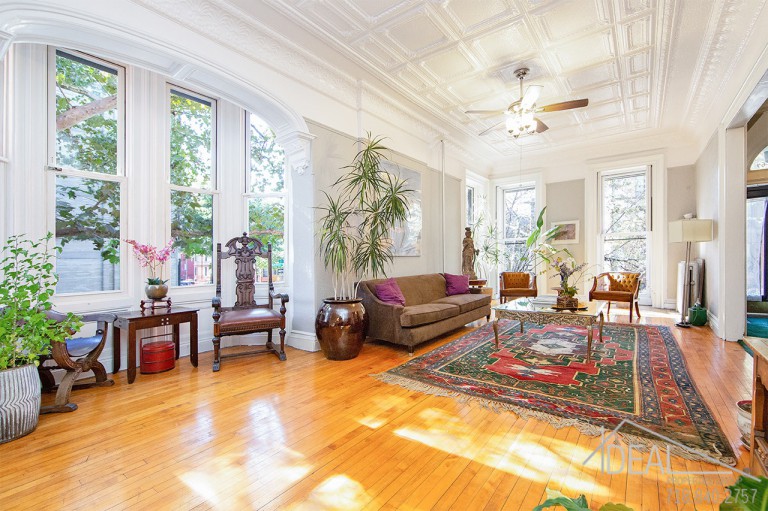 Besen & Associates announced that Eric Tiefen and Shlomo Gelernter have been retained to sell 506 East 6th Street in the East Village. The 5-story walkup building has 14 apartments totaling approximately 6,825 s/f. Built circa 1920 and renovated in 1987, the property is on the south side of East 6th Street between Avenue A & Avenue B within walking distance of the M14A bus, the L train on 14th Street, the 6 train at Astor Place, and the 2nd Avenue F train along Houston Street. The 100 percent occupied property is comprised of nine studios and five one-bedroom residential units. Asking price is $6,250,000.

GFI Realty Services has been named the exclusive sales agent for 829 Willoughby Avenue, a newly renovated, seven-unit, walk-up apartment building in the Bedford-Stuyvesant section of Brooklyn. Senior Director Shlomo Antebi will oversee the marketing of the property, with pricing targeted at $4.25 million and a going-in CAP rate of 5.5% Constructed in 1899, the four-story building totals approximately 5,700 S/F, and is composed of three one-bedroom units and three two-bedroom units, including one duplex unit. The fully occupied property recently received significant renovations. The building also offers residents common-area amenities, including a roof deck.

Jeff Weiss of Highcap Group has been retained to sell the 100% fee interest in 57 Fourth Avenue, Brooklyn. The property is a corner mixed-use building with three through one-bedroom apartments and two retail spaces, located in the Boerum Hill neighborhood. The building consists of approximately 4,526 s/f with 80 ft. of frontage on Fourth Avenue. Asking price is $5,200,000.

Ideal Properties Group is marketing 267 Sixth Avenue in Park Slope, Brooklyn, a townhouse once known for housing the Swedish-American Athletic Club. The 7,200 s/f home is on sale for $5,999,000. The seven-bedroom, three-bathroom home was built in the 1870s and became the home of the Swedish-American Athletic Club in 1912. In the 1970s, the previous owners converted the club into its current layout, which is a 5,400 s/f four-bedroom, two-bathroom owner’s triplex over a three-bedroom, one-bathroom 1,800 s/f rental. The mansion has changed owners only four times in 150 years. Erik Serras is the listing broker for the property.

Mike Freedberg, president of Suffolk Industrial Properties LLC, arranged the $755,000 sale of 1-9 Hicks Street, a 6,430 s/f, multi-tenant industrial building located in Amityville, NY. The industrial building was sold by PSTB LLC to Hicks Street LLC. Constructed in 1970, the property is about 50 percent office and is to be delivered vacant to the buyer. Freedberg represented both the seller and the buyer.

Holliday Fenoglio Fowler announced the sale of Sunrise Plaza, a 255,940 s/f retail power center in Forked River, New Jersey. The HFF team marketed the property on behalf of the seller. Completed in 2007, Sunrise Plaza is 100 percent leased and anchored by Aldi, Kohl’s and The Home Depot. The center is situated on 27.9 acres on Route 9, three miles from Exit 74 of the Garden State Parkway. The HFF team representing included Jose Cruz, Stephen Simonelli, Kevin O’Hearn and Michael Oliver.

Larken Associates acquired an additional 106,000 s/f of commercial space, anchored by a ShopRite in Warren County. The Village at Hawk Pointe includes more than 81,000 s/f of retail and a 25,000 s/f single-tenant medical office building. It’s fully leased by Hunterdon Healthcare. An HFF team marketed the property on behalf of the seller, Asbury Farms. Larken Associates purchased the asset for $16.2 million.

Lee & Associates NYC announced that Kelly Koukou, Executive Managing Director/Principal, arranged the sale of the 18,000 s/f building at 1522 Old Country Road in Plainview, NY, for $2.8 million to Safeguard Self Storage. On the 1,500 s/f second floor will be used for office space while the remainder of the building will serve as one of the retail locations for the self-storage facility. The company’s offices will be relocating here from Melville, New York. Plainview is located within the town of Oyster Bay on Long Island’s North Shore. The seller was A.M. Property Holding Corp.

NAI Long Island announced the following sales trnasactions:
• Gary Pezza, Senior Director, represented the buyer, Duke 68 Main LLC, in the purchase of 68 New York Avenue in Halesite, New York. The 885 s/f retail space, located in the waterfront district of Huntington Harbor, sold for $325,000 and will continue to be utilized as a hair salon. The seller, Robert Kasdon, was represented by David Angelo of The Rochlin Organization.
• Gary Pezza represented both the seller, Adela Fernandez, and the buyer in the sale of 1711 New York Avenue in Huntington Station, New York. The 2,700 s/f retail space sold for $575,000 to Viva La Vida Corp. for use as a Mexican restaurant. Viva La Vida Corp. has hired an architect to renovate the building in keeping with the ongoing revitalization of Huntington Station.

Rosewood Realty Group announced the following sales transactions:
• The $3.7 million sale of a four-story, walk-up apartment building with 16 residential apartments in the Flatbush-Ditmas Park section of Brooklyn. The 15,800 s/f building at 2522 Newkirk Avenue (aka 436-446 East 26th Street) was built in 1915. It sold for 11.7 times the annual rent roll, for a five percent cap rate. Rosewood’s Michael Guttman and Aaron Jungreis represented the seller, Aulder Capital. Jungreis and Brendan Cohen represented the buyer, Sutton Equity Capital.
• The $3.2 million sale of a three-story, mixed-use multi-family building on Central Avenue in Cedarhurst, Long Island. Michael Guttman represented both the buyer, PD Central, LLC and the seller, 488 Central Avenue, LLC. This is the second time Guttman sold the building since 2017. The 12,000 s/f building at 488 Central Avenue, features eight apartments and two retail spaces that include a restaurant and a children’s clothing store on the ground floor. Built in 1924, the property sold for 13 times the annual rent roll, for a 5.7 percent cap rate.

Marcus & Millichap announced the sale of 107 MacArthur Avenue, a nine-unit apartment property located in Sayreville, NJ, for $1,165,000. Jonathan Zamora, an investment specialist in Marcus & Millichap’s New Jersey office, exclusively represented the seller and buyer, both private investors. The apartment building is located at 107 MacArthur Ave in Sayreville, NJ. The property has gone through gut renovations a few years ago, replacing all kitchens, bathrooms windows and electric.