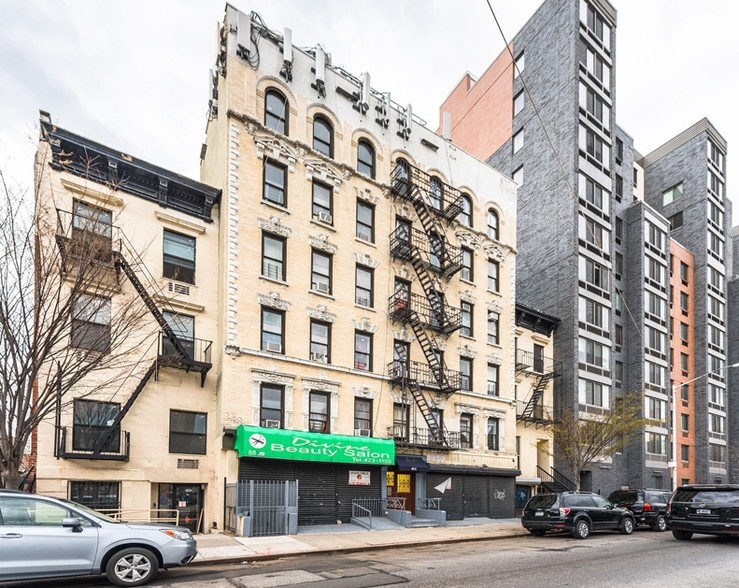 Ariel Property Advisors has been retained to sell three properties in East Harlem for a combined value of $18.55 million. Victor Sozio, Michael Tortorici, Marko Agbaba, James Nestor and Jack Moran are the agents:

• 1882 Park Avenue is a three-story, 3,200 s/f office building listed for $2.15 million. Interior layouts consist of three floor-through units, with recent renovations including upgraded electrical and mechanical systems, HVAC systems, video surveillance and hardwood floors. Additional building amenities include a private sitting and outdoor space on the second floor, as well as 11 ft. ceilings throughout the building. The property is currently owner-occupied and will be delivered vacant.

Cushman & Wakefield has been retained on an exclusive basis to arrange for the sale of 3737 and 3739 White Plains Road, two properties totaling 37,856 buildable square feet, located in the Williamsbridge neighborhood of the Bronx. The buildings can be sold as a package or individually. Jonathan Squires, Stephen Preuss, Charlie Dupont, Addison Berniker and Shayne Soltan are representing the seller:

• 3737 and 3739 White Plains Road are respectively a mixed-use property and commercial building. The existing buildings contain two residential apartments and one commercial unit with an additional Class A 6,030 s/f warehouse and office building on a separate tax lot. The property currently has two tenants in the residential units, while the retail and warehouse component will be delivered vacant. This property is located one block from the 219th Street subway station with access to the 2 and 5 trains.

• Rodney Nassimian has been retained to sell the retail condos at 189 Avenue C in the East Village. There are two units, one on Avenue C that spans 2,108 s/f and the other on East 12th St that spans 407 s/f. Both units will be delivered vacant. Avenue C would fit for a restaurant/retail space while East 12th would work for a medical space. The units are located in The Calyx, a 10-story luxury red-brick building constructed in 2010 and converted to a condominium in 2016. The property benefits from the 421a Tax Abatement. The asking price is $2,600,000.

• Charles Chang has been retained to sell a free-standing sushi and hibachi restaurant at 316 Main Street in East Setauket, NY. The restaurant currently operating as Tai Show is located on prime 25A, a two-way street. The newly-renovated structure has a bar, outdoor space and a parking lot. It spans 3,420 s/f plus a mezzanine.The property has a current lease expiring in December of 2023. The asking price is $1,900,000 and ownership is seeking all proposals. There is potential to purchase business as well.

• Rodney Nassimian has been retained to sell 3210 Bainbridge Street and 764 East 187th Street in the Norwood and Belmont neighborhoods in the Bronx. The two-building portfolio provides a total of 16 residential units. 3210 Bainbridge St is a 7-unit building close to the D subway line at the 206th Street Station in Norwood. The building is 25 by 75 ft. on a 25 by 90 ft. lot The three-story walkup spans 5,625 s/f. All units are two bedrooms. the rpoperty has a new boiler and roof. 764 East 187th St is a 9-unit building in Belmont n. It is a four-story rent stabilized walkup spanning 6,530 s/f. All units here are all two bedrroms. The asking price is $3,200,000.

RM Friedland announced that Marco Lala and his team have been retained to sell a 175 ft. wide mid-century elevator building in the Bronx’s Bedford Park neighborhood. Owned by the same family since it was building 71-years ago, 2771 Bainbridge Avenue consists of 60 residential apartments and is located just south of E197th Street. The well maintained asset features a steel and glass entrance, terrazzo lobby floors, steel and terrazzo stairs, attractive lobby with fireplace decor, boiler running on #4 oil, a dual fuel capable burner, a 5,000 gallon above ground oil tank, sprinklers in compacter and laundry rooms, three washing machines and three dryers. Tenants enjoy a 30 minute commute to midtown Manhattan via the Metro North Fordham Station and there is an MTA D train station located a 5-10 minute walk from the property.

• 124 West 73rd Street is located between Columbus and Amsterdam Avenues and features five floors of living space and a two-story extension with a finished roof deck. Designed by Thom & Wilson in 1881, it was constructed as part of an original row of three townhouses, all of which are still standing. The historic Neo-Grec brownstone contains eight apartments, including a two-bedroom duplex, a one-bedroom duplex, a one-bedroom and five studios. The property also offers 2,349 s/f of excess air rights. This transaction represents the first sale of the property in over 50 years.

• Located between Columbus Avenue and Central Park West, 164 West 81st Street was built in 1882 and underwent a full gut renovation in the early 2000s. It was then converted to its current configuration of eight studio apartments. The 18.75 ft. wide Renaissance Revival townhouse features 11-foot ceilings, a south facing garden and a finished basement, as well as modern kitchens and baths in all of the units. The property also offers 3,899 s/f of excess air rights.

In an off-market transaction, Friedman-Roth Realty Services brokered the $30,000,000 sale of a package of six-story elevator apartment buildings. Located in the Bronx, the three properties, 1515 Grand Concourse, 1860 Billingsley Terrace, and 3530 Dekalb Avenue, contain 185 units which are predominately rent-stabilized. The seller was represented by Giuseppe Inglese and Nadeem Haque and the purchaser was procured by Giuseppe Inglese. The purchase price pencils out to a cap rate trade of 5.6 percent and a gross rent multiplier of 10.25.

Marcus & Millichap Capital Corp. (MMCC), announced the sale of a 132,000 s/f office building located in Wayne, NJ. Fahri Ozturk and Richard D. Gatto, investment sales specialists in the firm’s New Jersey office, had the exclusive listing to market the property on behalf of the seller, a private owner. They also secured and represented the buyer, an out of state investor that will lease up the sapce. 65 Willowbrook Boulevard is a six-story office building built above three stories of parking, including 750 spaces for tenants. With low occupancy at the time of sale, the building underwent recent capital improvements including a newer roof, HVAC systems, and a parking deck. The property has easy access to Interstate-80, Route 46, Route 23 and the Garden State Parkway. Additionally, the property is located across from the Willowbrook Mall, Costco, HomeGoods, Target, The Home Depot, Dicks Sporting Goods, AMC theatre, and many more national retailers. The property is located a half mile from the Willowbrook Park & Ride which has a 30-minute direct bus ride to Port Authority and 25 miles to New York City.