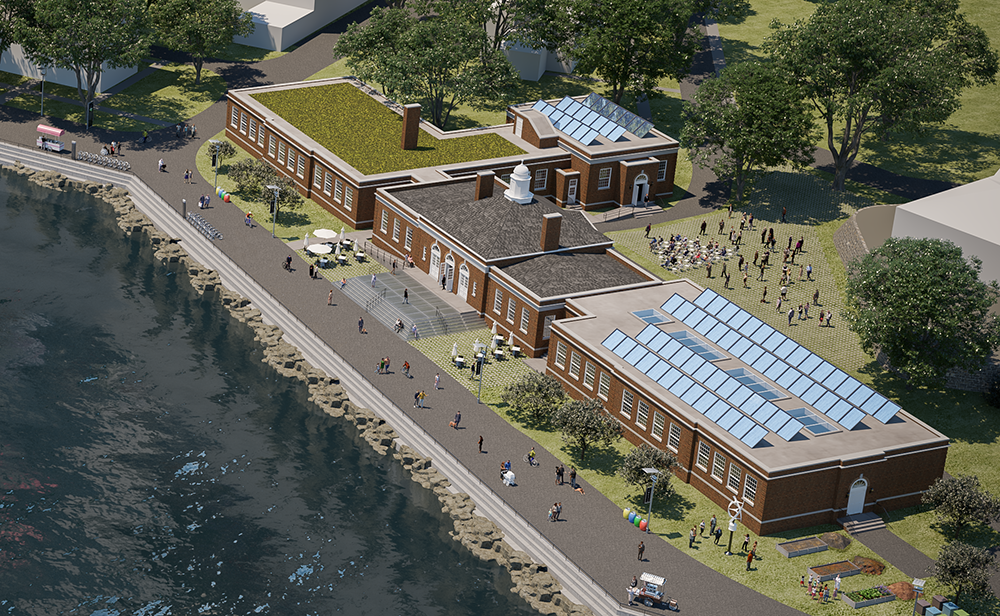 A partnership of North River Company and BJH Advisors has been selected to develop a climate change solutions hub on Governors Island.

Called Buttermilk Labs, the joint venture has been designated by the Trust for Governors Island as the lessee for Building 301 following a public RFP process seeking a developer to ground lease, redevelop, and operate the historic structure as a hub of commercial, non-profit, and/or academic uses related to sustainability and climate change solutions.

Buttermilk Labs (rendering top) will include 10,000 s/f of office and co-working space for small businesses and non-profit organizations in the environmental sustainability sector, R&D laboratory space, 2,000 s/f of event and convening space, and other public amenities for Governors Island visitors and tenants.

A curated venture space led by Greenwood Strategies and Barretto Bay Strategies will anchor the project and provide support and mentoring to a mix of startups focused on design and engineering for climate adaptation, renewable energy research and monitoring, and the transition to a low-carbon economy. The space will offer New York’s rapidly-expanding climate-tech community a full roster of industry convenings, public events, and commercialization and growth programming.

According to the Trust, the lab is already in talks with prospective tenants focused on the offshore wind and urban resiliency sectors. They include Duro UAS,  a New York City-based company that  makes  autonomous submersible systems for underwater monitoring and data collection; the Waterfront Alliance, which plans to offer STEM-based estuary education and public programming under its Rise to Resilience campaign; Rebuild by Design, which helps communities identify and design solutions for large-scale climate change.

Empire State Development, through the New York City Regional Economic Development Council, is supporting Buttermilk Labs with a $2,500,000 grant.  Acting Commissioner and President & CEO-designate Hope Knight said, “Companies dedicated to creating a cleaner environment are crucial to New York’s efforts in moving the State toward a greener economy. Empire State Development is proud to provide funding for this project, which will support businesses focused on climate change and create a pipeline of talent for jobs in the industry. With Buttermilk Labs, New York State will continue to lead the fight for creative climate solutions, and a future focused on boosting our economy with green jobs.”

The announcement represents a milestone in the Trust’s ongoing strategy to reactivate the Island’s nearly 1.3M SF of historic buildings and represents the first commercial tenant on Governors Island dedicated to climate solutions.

Constructed in 1934 and expanded in 1959, Building 301 originally served as a school for children of US Army and US Coast Guard personnel stationed on Governors Island.

In June, 2021, Mayor Bill de Blasio and the Trust for Governors Island announced a competition to establish a Center for Climate Solutions on Governors Island, and is currently seeking an anchor university and research institution through a Request for Expressions of Interest.

Mayor Bill de Blasio recently announced that Governors Island will be open to the public on a year-round basis for the first time in history beginning in 2021, with NYC Ferry expanding service to seven days a week on the South Brooklyn route. For more information, visit govisland.org.

New York City Regional Economic Development Council Co-Chairs Winston Fisher, Partner at Fisher Brothers, and Félix V. Matos Rodríguez, CUNY Chancellor, said, “Buttermilk Labs advances the NYCREDC’s goal of preparing New York’s economy for a climate-friendly future. We are proud to support the Trust for Governors Island and its partnership with Buttermilk Labs, which will cultivate businesses and nonprofits focused on climate change and help prepare a workforce that will protect the environment.”

“North River Company has a deep history restoring historic structures and caring for environmental issues dating back to our founder, Coleman Burke, who with his team, remodeled the 1890’s Terminal Stores Building as well as other brick and beam structures,” said Christopher Flagg, President of North River Company. “Coley also served on the board of the Woods Hole Oceanographic Institution and several other environmental not-for-profits. Being awarded this project designation by the Trust for Governors Island as the first step of their broader initiative to establish the island as a global hub of climate innovation would be an honor for any applicant, but certainly holds a particular meaningfulness for our team.”