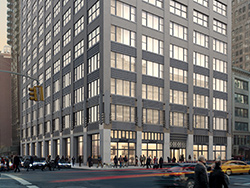 Relocating from 8,013 s/f at Feil’s 853 Broadway, Media iQ is in the process nearly tripling its space.  Its new location will include exclusive access to a significant portion of a private rooftop terrace via passenger elevator. The lease brings the 405,000 s/f 261 Fifth Avenue building to more than 87 percent occupancy.

“We were thrilled to accommodate the rapid growth of an existing tenant within our portfolio of 14 buildings in New York City,” said Brian Feil, vice president of leasing for The Feil Organization.

“This proves that our strategy of owning corner buildings in great locations near transportation and of various size around the city allows us to establish and maintain long-term relationships with our tenants. Over the past 10 years, we have patiently renovated and upgraded the majority of our office properties, and in each case have succeeded in bringing in high-caliber tenants.”

The building has a combination of tenants, approximately 50 percent of whom are in the homegoods industry and 50 percent general office users. Other tenants at 261 Fifth Avenue include Himatsingka USA, Richloom Fabrics Group, Dan Klores Communications, and Tumi Inc.

Rebecca Mahony, Chief Marketing Officer at Media iQ, commented, “The Feil Organization has recognized our needs by helping us expand from an original 2,200 s/f at 853 Broadway to 8,013 s/f and now what will become our new 23,000 s/f home at 261 Fifth Avenue.”

The property was recently renovated, receiving a new lobby and façade. A high-speed elevator dispatch system was installed and common corridors have been modernized.
Built in 1928, the 26-story office building is situated close to Madison Square Park, a historic district that has become a haven for residential, retail and restaurant developments, as well as many TAMI businesses.