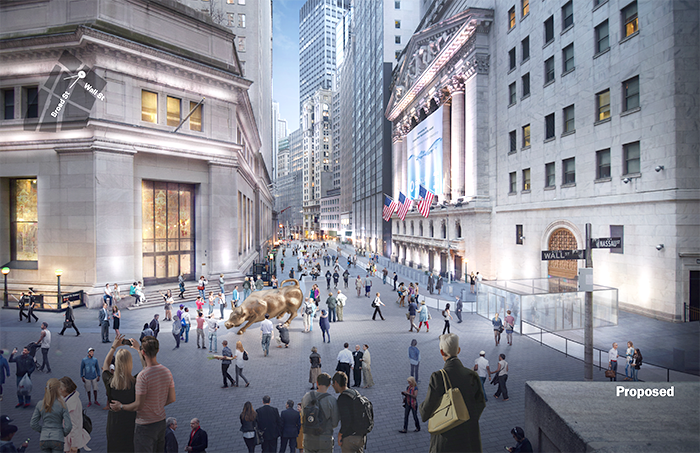 The Alliance for Downtown New York released a new report calling for major design changes in the Stock Exchange District.

The report lays out a series of recommendations that would make one of the most heavily visited and historically important areas of New York City more welcoming, vibrant and secure.

Alliance president Jessica Lappin called it “a grand yet achievable vision that could turn the Stock Exchange District into the jewel it should be.”

The study focuses on creating an identity and sense of place; improving the pedestrian experience; and rationalizing essential deliveries.

Suggestions include creating curbless shared streets and installing custom “gateway” structures at the main pedestrian entrances to the district to give people a sense of arrival in a special area.

The plans also calls for upgraded lighting along dark corridors and architectural lighting focussed on the area’s nine landmarked buildings.

The Alliance wants to see more sidewalk space on a redesigned New Street and extra loading bays that getst rucks off the sidewalks.

And the report suggests piloting a consolidated delivery center for all packages arriving in the district. This pilot would create a centralized delivery truck drop-off point and then disseminate packages within the area by hand-truck or small vehicles.

Committee Co-Chair Tom Farley, president of the NYSE, said, “The corner of Wall and Broad has witnessed the span of Lower Manhattan history from Henry Hudson’s arrival in New York harbor to the heroic response to 9/11. As co-Chair of the Stock Exchange District Study Steering Committee, a city resident, and President of the NYSE, I strongly endorse the vision in this report which celebrates our past, helps our mixed-use neighborhood thrive and grow, and safeguards our millions of workers, residents and visitors — now and into the future.”

Ric Clark, the Chairman of the Alliance for Downtown New York and Senior Managing Partner and Chairman of the Brookfield Property Group and Brookfield Property Partners added, “The Wall and Broad study is a thoughtful plan and how it’s come together demonstrates the real power of BIDS.
Throughout this process, the Alliance has led project with tremendous participation from the community, they brought the right players together to make these recommendations and I’m confident the collaborative efforts will continue as they try to get improvements underway.”

The plan works within security parameters established by the NYPD, and is designed to be realistic with changes that can be implemented in stages, over several years, by both public and private sector actors.
There has been a high level of real estate activity in the area in recent years — six properties have changed hands, five buildings have undergone, or are in the process of residential conversion and hundreds of millions are being invested by private owner.

Alicia Glen, New York City’s Deputy Mayor for Housing and Economic Development said, “We greatly appreciate the Downtown Alliance’s partnership as we work to improve the public realm and safety in the Financial District.

These are thoughtful plans and proposals that will inform our efforts, and align with our shared goals of making this a dynamic streetscape that welcomes workers, residents and visitors alike.”