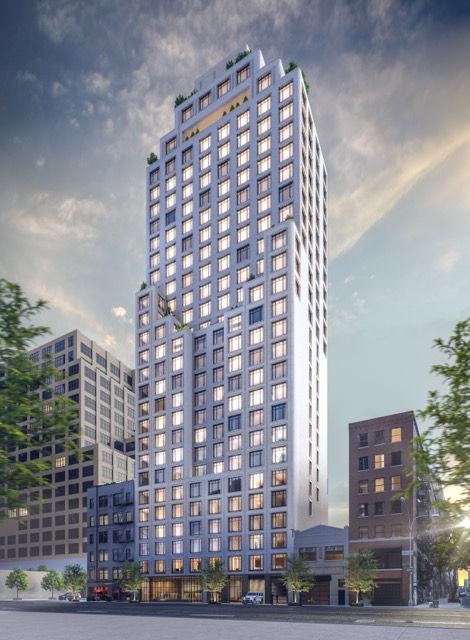 Sales will begin this fall at prices starting under $1 million.

The project is being built by Plaza Construction, an affiliate of Strategic Capital.

Greenwich West will be a full service building with concierge, doorman and amenities.

Apartments will range from studio to three-bedrooms, and the property will be anchored by a café retail space on the ground floor as well as on-site parking. At 290 ft. tall, the tower have views up and down the Hudson River.

Sales are slated to begin in fall 2018. Corcoran Sunshine Marketing Group is the exclusive sales and marketing agent.

BRGDM, the development marketing division of Bohemia Realty Group, has put 24 condos at The Ammann on the market.

The Hudson Heights mixed-use development. located at 40 Pinehurst Avenue at the corner of 179th Street, features one-, two- and penthouse residences.

BRiQ at 237 Duffield Street offers 110 studio, one- and two-bedroom apartments, 22 of which offer 421-a tax incentives and are part of New York City’s Inclusionary Housing Program.

The name BRiQ stems from the building’s red-brick façade; the ‘iQ’ portion is a nod to the building’s proximity to the MetroTech Center and the surrounding schools.

The mixed-use building will include 4,773 s/f of retail space across the ground floor, with residential units spanning from the second through 21st floors.

Residents will have access to a communal lounge and two outdoor common areas, which offer views of the East River and the Manhattan skyline.

An un-named developer has purchased a development site at 12-19 31st Drive in Astoria, Queens, with plans for a 17-unit apartment building.

The buyer plans to demolish the existing walk-up building oand develop a three-story, 17-unit residential property, according to CPEX.

The site is one block away from Socrates Sculpture Park on the Astoria waterfront. The 11,170-square-foot footprint offers 15,080 buildable square feet for residential development.

“The recent addition of ferry service to northern Astoria has fueled a new wave of residential development,” said Vintonik. “This part of Astoria, which wasn’t popular as recently as a few years ago due to limited transportation options, is now one of the most sought-after markets in the city.” 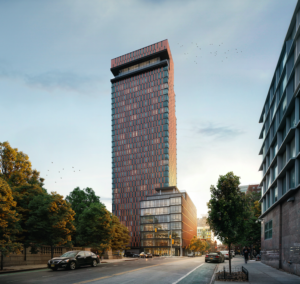 Ahead of its launch and opening later this summer, The Amberly, the 33-story luxury rental in Downtown Brooklyn has release new renderings.

Located at 120 Nassau Street, the tower will have 270 homes ranging from studios to three-bedrooms, some with private outdoor space.

The development is the first US project for Australian architects, Woods Bagot. Amenities will include a 10,000 s/f public plaza and a sky lounge that occupies the building’s full 33rd floor.

Citi Habitats is the exclusive leasing and marketing agent. The Amberly is being developed by AmTrust Realty Corp.