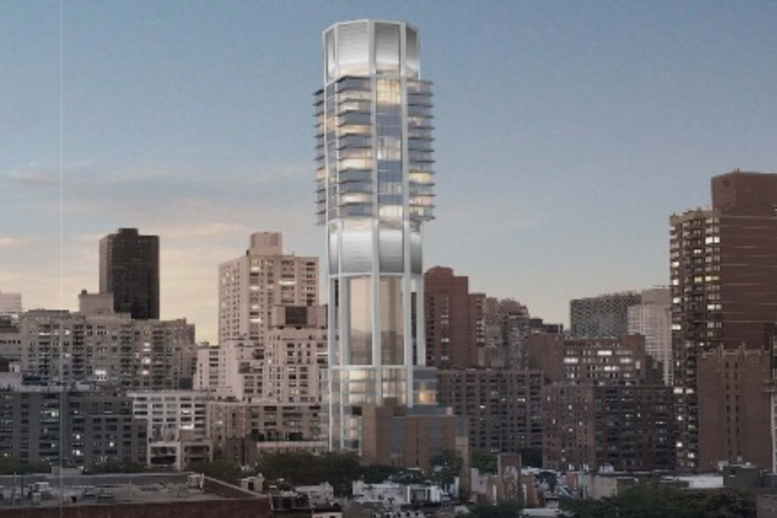 Developers continue to employ novel methods to amass the tallest buildings in the city, leaving brokers and their clients to adjust to an obsession with height.

While new developments are restricted to the area’s zoning laws, developers have come up with several ways to get taller buildings while still complying with the code.

New developments are now cropping up with design elements such as building atop stilts, creating large mechanical rooms or including hollow structural voids that don’t count towards the building’s FAR (Floor Area ratio) or maximum square footage limits.

The tallest residential building at 432 Park Avenue is one of the most visible examples of developers using design elements that help raise their height.

In the Rafael Vinoly-designed building, there are several two-story mechanical structural voids every several floors that are meant to help stabilize the skinny tower and contribute to its slender design.
In another Vinoly-designed building on the Upper East Side, the architect employed the use of a structural core and upper floor mechanical rooms to achieve greater heights.

The trend of new techniques to get higher buildings may also be spreading to the Upper West Side where the community is questioning Extell Development’s 50 West 66th Street project.

Extell’s new development would become the tallest on the Upper West Side at 775 feet high. But residents are concerned about the project, where foundation construction is already underway foundation.

Opponents, including the West 65th & 66th Streets Block Association, Councilmember Helen Rosenthal and preservationist group Landmark West! have claimed that the developer may sandwich structural voids between the stacks of residential floors as its previous plans called for 25 stories. While Extell released renderings for its residential tower, plans have not yet been filed for the building.

Brian McFarland, principal at CetraRuddy – which is not involved with any of the previously mentioned projects — explained that adding mechanical voids in a residential project is a simple task, but building atop stilts can be a much harder challenge architecturally.

According to McFarland, sometimes architects are required to use mechanical spaces to lift buildings in cases where there are surrounding buildings that prevent a property’s lower floors from reaching light and air requirements.

In other cases, such as CetraRuddy’s 45 Broad Street supertall tower, mechanical spaces are found throughout the building to bring them closer to the areas that they service, McFarland explained.

And these days, McFarland said the use of different techniques to boost buildings is common as more districts now have zoning that allows developers to reach for the skies.

“When I was starting off in this business, tall residential buildings were much rarer, and those that did exist, like CitySpire, never approached the heights we’re seeing today,” said McFarland. “The trend is more conspicuous now, with multifamily development moving into zoning districts that permit towers but weren’t previously considered residential destinations, including areas like the Special Midtown District that gave rise to Billionaire’s Row, and Lower Manhattan neighborhoods such as the Financial District.”

The CetraRuddy architect added that the industry is diverging into two types of design; free-form building that’s more creative, and “vertically elongated.”

“On some levels, it is starting to impact design,” McFarland said of the trend. “More and more, architecture is going in one of two directions, either in the vertically elongated towers or object form buildings where the entire building is treated as a form.”

As the trend picks up more steam, brokers and their potential clients will have to adjust to the increasing amount of high floor stock. But brokers warn that the prices climb as much as the desired floor.

“Absolutely you’re going to pay for each floor you go up,” said Therese Bateman, a broker with The Level Group. “Even when I’m valuing for re-sale, I’ll always factor in for each floor up. And once you get to breakout views, that changes altogether.”

Taking a look at 432 Park Avenue, city records show that the top floors, from the 80th floor upwards and not including the penthouses, sell for at least $30 million. The pricetag is cut almost in half with the lower apartments around the 30th, 40th and 50th floors going for roughly $15 million.

“The demand for higher is because a large population of people think they’ll have great views, more privacy, less noise,” Bateman said. “Developers are also catering to the common conception that people want views.”

“The higher you go in a building, the more money you can get for it,” Shemesh said. “Therefore it’s a win-win situation because buyers get apartments with higher views and developers are able to sell it for higher amounts.”

Shemesh explained how the various floors of residential condos still target different groups and can still be filled. And Bateman agreed, saying there’s still a market for lower properties due to personal preference or not wanting to rely on an elevator.

But the Level Group broker added that developers may be creating more supply of something that the population could eventually grow tired of.

As for the city, the Department of City Planning is working on adjusting the zoning regulations in high density residential areas that lead to often unexpected results.

During a June mayoral town hall meeting on the Upper West Side, the department’s Manhattan director Edith Hsu-Chen said they’re trying to better understand the issue of voids, especially the “extraneous, maybe egregious” methods that are “used just to loft the building taller.” DCP said it should have policy recommendations ready by the end of the year.

If anything changes, brokers may be pleased even if their top-floor sales decline.

For Bateman in particular, the idea of people living in ivory towers would remove the special intimate qualities of the city.

“We don’t want to be left with a ghost town in the bottom of the mechanicals while there are people living in ivory towers,” Bateman said. “One of the most important things in New York City is between the residents and the people who come here. You want that connectivity to remain.”