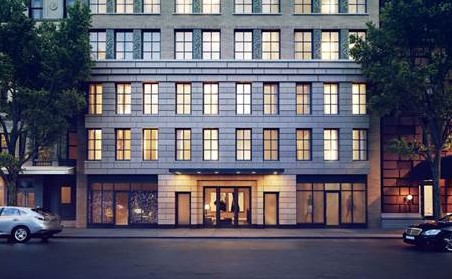 Sales launch at 207W79
Anbau has launched sales at 207W79, a luxury condominium at 207 West 79th Street.
Exclusively represented by Corcoran Sunshine Marketing Group, the full-service condominium features 19 residences designed with modern loft spaces.
Designed by Morris Adjmi Architects, 207W79 is the firm’s first ground-up project in the neighborhood.
It has two- to six-bedroom residences, including two townhouses and a penthouse, ranging from 1,662 to 4,336 s/f and priced from $3.95 to $15 million.
Living and dining rooms feature mansion weave parquet patterned floors as well as casement windows. Kitchens have Calacatta marble islands, gray oak cabinetry and classic fixtures by Lefroy Brooks.
Amenities include a 24-hour attended lobby, fitness studio, playroom with bleacher seating and integrated cushioned benches, a bike room and private storage for purchase.

21 West End, the luxury rental tower by The Dermot Company, has officially opened for leasing with move-ins expected to begin in September.
The building is the first component of the Riverside Center master plan conceptualized by Pritzker Prize-winning architect Christian de Portzamparc.

Designed by SLCE Architects, 21 West End offers a best-in-class amenities package and unit interiors designed by ICRAVE.
More than 35,000 s/f of communal space includes a playroom with a life-size, climbable dinosaur, indoor dog run, arcade lounge with a bar and full kitchen . There is also an EOS club room, golf simulator, games, and screens.
Residents have access to a custom swimming pool and spa, and 21,000 s/f fitness center that includes yoga and boxing studios, while hobbyists and students can take advantage of the garage and workshop.
Other amenities include a wine-tasting room, a library, screening room, and a fully-operational, staffed bar and café.
After successfully launching its Hallway Hijack art project at 66 Rockwell in Brooklyn last month, Dermot will be unveiling a digital art sculpture to be located in the lobby within the next year.
Located at the southwest corner of West 61st Street and West End Avenue, 21 West End comprises 43 floors. The LEED-certified, luxury high-rise rental includes 616 apartments.
Studios, one -, two-, and three-bedrooms range in price from $3,140 to $10,060 per month.

Corcoran Group Marketing’s Shelley O’Keefe is overseeing sales while Jeffrey Cole will serve as the executive architect.
Situated on the south side of East Houston Street between Suffolk and Clinton Streets, 287 East Houston Street will rise 120-foot high. The 11-story structure will be comprised of 29,000 s/f of residential space.
As of fall 2016, ground was broken at the site and construction has begun.
The building’s residences have 10 ft. ceilings, whitewashed oak floors, and G.D. Cucine-designed kitchen. Select residences have floor-to-ceiling pocket doors and outdoor space.
Residences range from one to three bedrooms and include a triplex penthouse and two ground-floor duplex maisonettes. Both maisonettes feature over 800 s/f of gardens.
Pricing for the units will range from $1.15 million and $5.45 million.

Architecture and interiors firm CetraRuddy announced its selection to convert the historic Mount Sinai St. Luke’s Hospital portfolio into market-rate rental apartments.
Located at 30 Morningside Drive, the conversion of the five Beaux-Arts structures f has been commissioned by the developer Delshah Capital.
The existing property includes four French Renaissance Revival pavilions, as well as a carriage house situated as the center of the pavilions. All were built between 1893 and 1928, according to Eugene Flotteron, AIA, director of architecture at CetraRuddy.
The Plant and Scrysmer pavilions, designed by the Beaux-Art architect, Ernest Flagg, were designated as a landmark site in 2002.
The complex redevelopment includes a new infill, as well as the transformation of the interiors into residential units.
The architect expects about 205 units of housing to be distributed throughout the four-building complex. The carriage house will also be reimagined as an amenity space for residents.
Initial work on the site has begun, with more extensive construction set to start early next year. Completion of all the project phases is anticipated for mid-2019.

One of building’s towers fronts West 21st Street and the other fronts West 22nd Street, and the building’s lobby can be accessed from both streets.
“We are incredibly excited to begin leasing at 7 West 21st Street. This property has so many fantastic spaces that renters can discover and interact with, from the chic modern interiors to the varied outdoor areas including the sunken garden, the rooftop and the expansive landscaped courtyard,” said Amy Rose, co-president of Rose Associates.
7 West 21st Street is comprised of 289 rentals in studio, one, two and three-bedroom configurations. Each features wood flooring, Bosch washer and dryers, and floor to ceiling windows.
Amenity spaces include a landscaped rooftop, a tiered landscaped garden, an outdoor courtyard, a residents’ lounge with catering kitchen and private event spaces, a gaming room with foosball and billiards, a video game room, a children’s playroom, a yoga studio and fitness center. The building also offers on-site parking and bicycle storage.
Rose Associates is currently leasing a limited edition of units with grand opening incentives. Monthly rents range from $3,900 for studio apartments to $7,865 for two-bedroom homes.