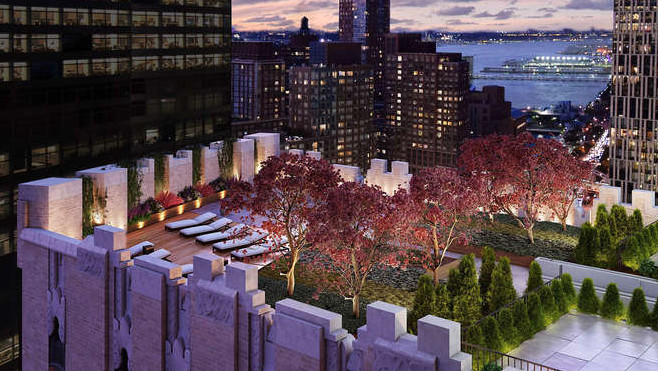 Magnum Real Estate’s latest project is a condo conversion in the heart of Lower Manhattan, in a building brimming with history and old-fashioned charm.

In 2013, Ben Shaoul’s firm purchased floors 11 through 22 of Verizon’s building at 100 Barclay Street in Tribeca. Three years later, the building is nearing completion, and has already sold 50 percent of the 158 apartments.

Shaoul now lives in the West Village but was a Tribeca resident in 2013 when Verizon was marketing the lower portion of the building.

One of the most distinctive features of the Art Deco tower, designed by Ralph Walker in 1927 as the HQ for New York Telephone Company, is its historic lobby. The design features marble walls, travertine floors with inlaid bronze medallions. Ornate decor based on the theme of communication — from Aztec runners to the telephone — fill the walls and ceiling of the lobby. Apartment owners will be be able to reserve the lobby for events with up to 200 people.

“I love the neighborhood, and believed in the building,” said Shaoul. “It was unique, exceptional, the bones of the building made out beautifully for family-style apartment. It’s a very gracious, kind of a Park Avenue-style feeling, something that wasn’t really available downtown.”

The architecture and historic nature of the building has attracted attention from a number of high-profile fashion designers.

Olivier Rousteing, creative director of French fashion house Balmain, held a launch for his line for H&M in 100 Barclay’s lobby last October, while Tom Ford, Hermes, and the CFDA all hosted events at the building as well.

Units at the building range from one to four-bedrooms with prices from $2 million to $10 million. Most of the apartments are three bedrooms, to accommodate the number of families living in the neighborhood.

“Most people that know the area are excited about this,” Corcoran Sunshine’s Larry Kruysman, who is the sales director at 100 Barclay. “It’s a little bit closer to transportation (as opposed to buildings in Battery Park City) and certainly closer to shopping.”

The apartments boast good light and air — windows in the units are six feet tall and most are four feet wide. Many of the units have their own private outdoor spaces, and finishes in the units include Calcutta marble, Wolf gas ranges, and Miele appliances.

Amenities in the building account for about 40,000 s/f, including the entire 18th floor. Among the exhaustive list are two pools, a fitness center operated by The Wright Fit, the same company that did 15 CPW, a media lounge, bar area, children’s playroom, teen room, four outdoor landscaped areas, and two soundproof music practice rooms.

“We’re trying to get a little bit for everyone,” said Kruysman.

The penthouse, which the sales team hasn’t yet begun marketing, will be 15,000 s/f with towering windows overlooking New York City.

The team expects the building to be finished by the end of the year or by the end of January. Sales began in April and so far, 20 families have moved in.

At the base of 100 Barclay, there will 100,000 s/f of retail. They are currently in the process of signing tenants for the spaces. The building is one of many on Magnum’s roster right now.

Magnum also just finished a building for the School of Visual Arts on 24th Street and 1st Avenue, which has luxury residential units as well as office and classroom space.

What women want: More single ladies than ever buying homes