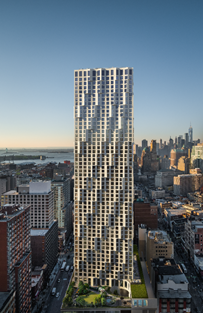 Designed by Studio Gang Architects, it has 480 condos and more than 55,000 s/f of indoor and outdoor amenity space, a private park, motor court and porte-cochere.

The tower has an undulating facade creating interior bay window spaces in units with 10 ft. ceilings and eight-foot square windows offering views in every direction.

Alongside the park, residents can access the Park Club with its 75 ft. indoor saltwater pool, fitness by The Wright Fit, squash court, locker rooms with saunas and steam showers.

The remainder of the second floor is dedicated to a co-working space and salon lounge, children’s playroom, game room, and a “mess-friendly maker’s studio.”

HFZ has launched sales at The XI, its full-block, mixed-use development between the High Line and the Hudson River in West Chelsea designed by Bjarke Ingels.

The $1.9 billion development will be home to the first US destination by Six Senses Hotels Resorts Spas, luxury homes, multiple restaurants, retail, an art space and a newly created public promenade adjacent to

Elad Group has tapped Reuveni Real Estate to take over sales and marketing at Charlie West.

The 16-story property is being co-developed by Elad US Holding and Mi & Co Development, with exterior design by Eran Chen of ODA Architects and interiors by the Andres Escobar.

The only new, ground-up condo in Hell’s Kitchen, the project is comprised of two towers connected by a central courtyard. First closings are projected for Spring 2019.

Charlie West offers 121 studio to four-bedroom homes, as well as penthouses. Many have terraces and balconies.

With Reuveni Real Estate now leading sales, the property is releasing a new collection of condos priced from $755,000 to over $4 million.

Cantor-Pecorella and Douglas Elliman were previously agents for the property. According to StreetEasy, 55 apartments have been sold and another 22 are in contract.

Situated along the Hudson River at 63 Wells Avenue, the 24-story building is the fourth and final in Strategic Capital’s 16-acre waterfront development.

River Club at Hudson Park has been designed by JSA architects and has 214 residences ranging from studios to two-bedroom apartments.

It is also pet-friendly and will offer smoke-free living, as well as include a 24-hour concierge service.
Next door to the building, the developer is building a boutique café designed by the founder of Jersey City’s popular Grind Café.

“Yonkers is becoming a destination,” said Phillip Gesue, Chief Officer of Development at Strategic Capital. “It’s cultivated its own artistic and creative communities, welcomed great restaurants and created an award-winning brewery. The recent influx of luxury residential real estate, such as River Club, is making it a very attractive place to call home.”

Glacier Global Partners has teamed up with CetraRuddy to bring a new building to Gramercy.

Building plans show that there will be a bike storage room, children’s play room, a gym and a pet spa in the basement as well as a rooftop and second floor terrace.

The top three floors will comprise one complete penthouse unit with a private roof terrace, according to the plans.

Plans have been filed for a new seven-story apartment building in Hell’s Kitchen.

The site at 422 West 49th Street, between Ninth and Tenth Avenues, will be home to a 65 ft. tall building with eight units, according to city records.

The plans show that first- and second-floor units will have access to a private yard. An application to begin foundation work was filed by Mortar Arch + Dev.

According to a Cushman & Wakefield listing, the lot has 2,500 s/f of undeveloped land and is currently being used as a parking lot. The site is owned by Gorijan Real Estate, according to ACRIS.

Ideal Properties Group announced the launch of DUO, a pair of triplex condominiums at 116 West 127th Street in Central Harlem. Prices start at $2,695,000.

Ceilings are 10 to 12 ft. and floor wide-plank white oak. The kitchens have a Wolf 6-burner range, Sub-Zero refrigerator, Bosch dishwasher, and Sharp drawer microwave. Baths have a rain shower, soaking tub and heated floors and Miele a washer/dryer included.