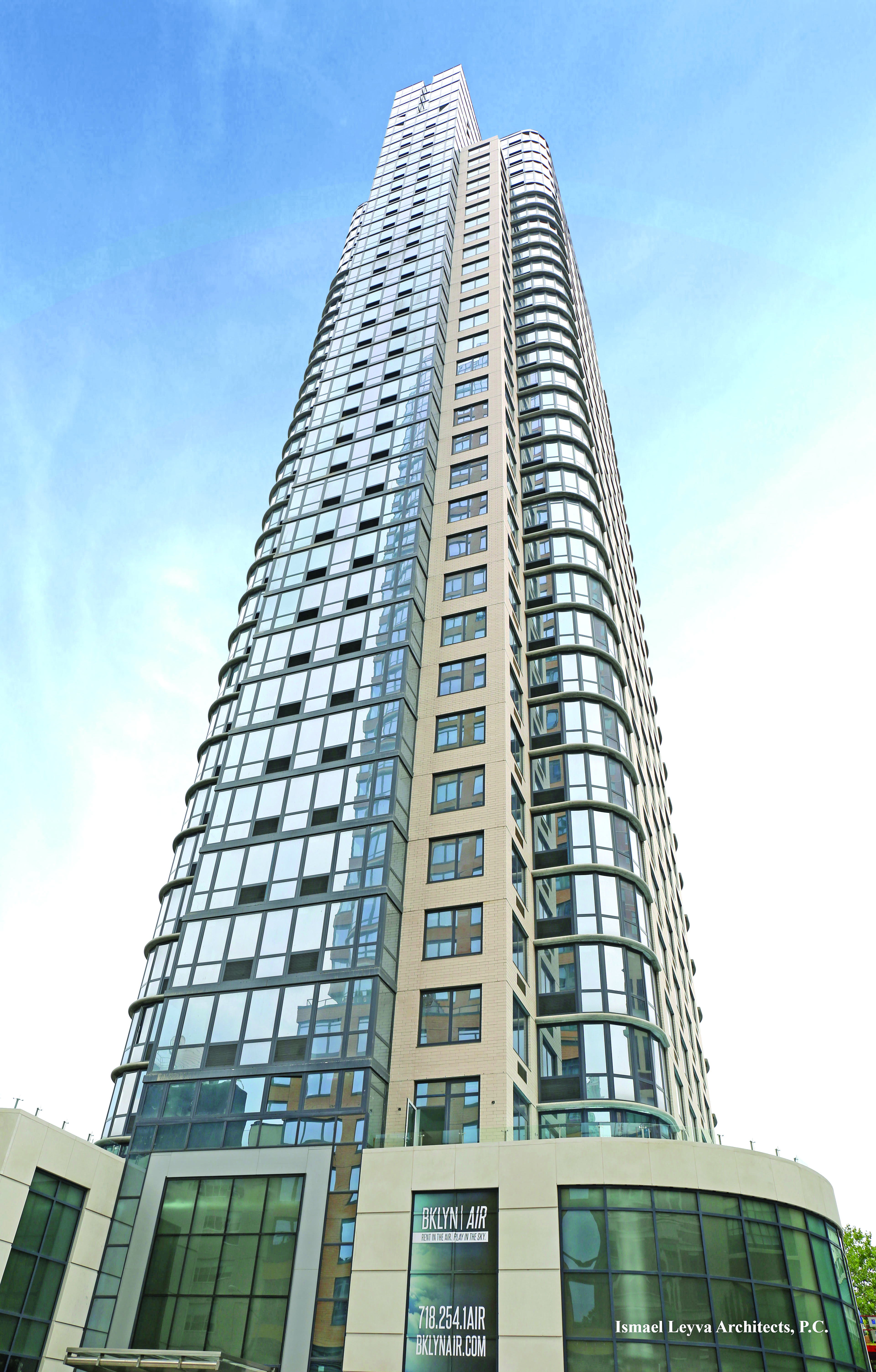 The surging luxury market of FiDi has earned plenty of ink over the past year, but just across the Brooklyn Bridge sits the BKLYN AIR, a striking symbol of Brooklyn’s hasty climb up the residential ladder.

The 432-foot high property is currently at 70 percent capacity since opening its doors in August of this year.Embracing panoramic views as a theme, the building’s curved sides are nearly completely coated in floor-to-ceiling windows, which offer residents unique views from multiple vantage points in their homes.

Ismael Leyva, the architect that designed the building, labeled the structure as “another grand element in the evolving Brooklyn skyline.”

Diana Makdulina, leasing director of BKLYN AIR,would agree and said that there are plenty of advantages to choosing luxury living on the far side of the East River.

“You still get more for your money than you would in Manhattan,” Makdulina said. “Units are larger and views are open and beautiful.”

Mike Werde, a broker at TOWN Residential who works in the Brooklyn luxury market, said the booming retail scene along Atlantic and Flatbush Avenues as well as attractions such as the Barclays Center and Dumbo’s array of eateries, have helped drive the market.

BKLYN AIR is also within walking distance to 13 subway lines, the Brooklyn Academy of Music and swanky stores such as Armani Exchange.

But neighborhoods alone do not make the building, especially in the luxury sphere, and BKLYN AIR has done its part to create desirable residences for New York’s upper tier.

The units come equipped with nine and 10 ft. ceilings, dark oak hardwood floors, washer and dryers inside each residence, and Bluetooth sound bar speaker systems that allow music to be broadcast throughout the apartment. Bathrooms have Kohler fixtures and Italian cabinetry that comes equipped with LED lighting.

The most expensive unit still currently available is a two bedroom, 2-bath unit at $5,800 per month.
Keeping in step with Manhattan competitors, BKLYN Air has rolled out a smorgasbord of amenities to help offer tenants a more pampered experience, including a 50-foot heated outdoor pool on a landing near the building’s peak, and a 360-degree sky deck which offers views of both Manhattan and Brooklyn.

Residents also are offered access to a gym that also wields the panoramic views that helps the apartments stand out. Located on the 39th and 40th floors, the workout center comes complete with both weight training and cardio fitness equipment.

For residents looking for a calmer escape from work or home, the Sky Lounge is outfitted with free WiFi, a large screen TV, and a kitchen.

Of course, BKLYN AIR does not serve a specific target demographic, but what the building offers may not be ideal for larger families Apart from offering no options that are larger than a two bedroom, the building also does not offer children’s play areas or other kid-friendly amenities that other high-end competitors do.

While it may not be the official strategy of the building, offering a space that is welcoming to millennials and other young professionals is a wise move according to Werde, who describes the area’s culture as being “mostly younger professional or couples.”

Werde said many of area’s young professionals don’t want to pay Manhattan’s steeper prices and enjoy the convenience of being so close to the borough.

“If you were going to pay the prices that are standard in Downtown Brooklyn, you’d probably have to live somewhere Uptown in the city,” said Werde.

“Obviously there is much more in the city, but downtown Brooklyn has everything you need.”