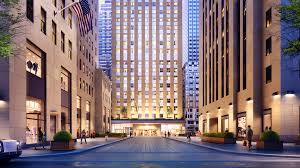 RXR Realty, which acquired a 99-year ground lease for the building in 2012, had no comment on the deal.
The owner is in the midst of a gut renovation of the 623,000 s/f building which was previously occupied in full by Time Warner.

According to Fried Frank, Merrill is the first office tenant to sign a lease in the renovated building.
The investment and wealth management company will relocate from 717 Fifth Avenue and will occupy space on the second through fifth floors of the tower.

Fried Frank also represented RXR in a 40,000 s/f lease signed in May for nearly all of the building’s retail space to Mattel subsidiary, American Girl, for its new flagship store.

IN PICTURES: Anbau tops out Citizen360