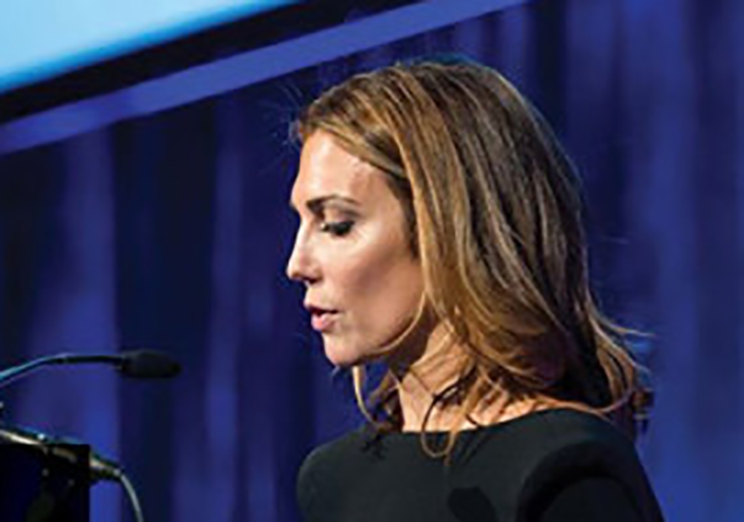 Meet Bess Freedman, the brokerage boss who won’t take any bhs from anyone

In many ways, those words are a reflection of the recently-appointed co-president, Bess Freedman.

Born in the old industrial city of upstate Troy, New York, Freedman boldly set out to study law. She earned an undergraduate degree from Ithaca College and then headed to The University of the District of Columbia, David A. Clarke School of Law, in Washington, D.C. for her law degree.

With convincing honesty, she admits her segway into New York real estate was “an adrenaline rush. If you dressed the part, showed up on time and did your homework, the sky was the limit,” she said of her arrival on the residential brokerage scene in 2003.

Over the next 15 years, Freedman applied her smarts to become one of the top-selling brokers at Corcoran, where she rose to become senior managing director, before moving to BHS in 2013 as managing director of sales and business development
Today, Freedman is leading the company alongside her counterpart, Hall Willkie, at a time when the brokerage business is in a state of flux.

She sees her role as ensuring that Brown Harris Stevens — one of the oldest real estate firm’s in the city — continues to stay in the front of the pack.

“I want to make sure we’re always evolving and growing as a firm,” Freedman said. “It’s never, ‘Sit down, we did that and we’re done.’ It’s always moving and we can never be static.”

Before real estate, Freedman worked as a juvenile rights attorney for the Legal Aid Society. She was expected to return to law after giving birth to her first daughter, but decided to shift gears at a friend’s suggestion. She met with BHS broker Adrienne Berman, who was working with Corcoran at the time, and quickly discovered that real estate resonated with her.

Freedman recalled her early days as a broker where she combed through the New York Times’ classifieds section. She relentlessly called one of the listings that was for sale by the owner, who eventually offered her two exclusive listings — one in the Upper East Side and another in the Upper West Side.

“Just from being tenacious, I couldn’t believe what I got out of it,” Freedman said of her first major deals.
Her determination to get deals was also reflected in her climb to the top. During her time as BHS’ executive senior vice president, Freedman was in charge of hiring new agents, supporting the existing employees, expanding the company’s reach to other areas and creating a more cohesive brand name.

But she said the most challenging aspect of joining BHS was earning the trust of her new fellow brokers.

“They have to get to know you, trust you, and know they can rely on you,” she said of starting at BHS. “Only your actions can demonstrate that, so it took a little time to come into effect.

“We’re a really agent-centered firm. Our number one focus on any given day is on the agents and what they need.”

With several years at the company and now serving as the co-president, Freedman has earned a strong mutual trust with her colleagues, especially Willkie, with whom she has developed what she calls “a nice flow.”

“We have a lot of the same values and ethics that we instill in how we lead the company,” Freedman said. “We have this nice flow of supporting each other and we rarely disagree.

“We really work so well together. We go to meetings together, we have similar vision for things, and he trusts me and he’ll support my decision.”

While Willkie provides leadership with the brokers and listings, Freedman oversees the corporate side of things involving technology and marketing.

Under her watch, Brown Harris Stevens has introduced new technology including the recent company rebranding, a new listings system and an appraisal tool for agents.

Since BHS is privately owned, Freedman said they have more freedom to operate how they want.

“We have authority to change and do things we want to do,” she said. “I feel like we can effectuate change very easily at BHS and if we make mistakes we can fix them pretty easily, too.”

And while technology can bring a lot of good, Freedman said there have been struggles with other instances of tech.
She has a particular distaste for StreetEasy, the popular listings website, and what she deems their “shady, unethical business practices.”

Freedman directly criticized StreetEasy’s Premier Agent program, where some brokers can pay for a visibility boost among listings.

Freedman said Brown Harris Stevens will not work with StreetEasy and that a better solution would be if companies came together to create a shared listing system.

“If you ask them, a lot of the agents will tell you they don’t like StreetEasy,” said the co-president. “But they don’t have a choice because that’s where the consumer goes.”

A spokesman for StreetEasy noted that the company “has 99 percent of all of listings in the city, some via direct feed from brokerage firms and others uploaded directly by agents themselves.”

Technological advancements aside, Freedman believes that the essential skills for what makes a broker successful haven’t changed.

“Technology has made things where we can work much more efficiently,” she said. “Having said that, it doesn’t replace the face-to-face interaction that’s so crucial and the expertise an agent has.”

Beyond that, Freedman said commitment to integrity is one of the most important traits in the fast-paced world of real estate.

“Integrity is doing the right thing even when it’s not convenient,” she said. “I tried to do that throughout my career with everything I do and that holds true particularly in real estate.

“There’s so much going on, there’s a lot of personalities and we’re in the relationship business, but you always have to fight to do the right thing even when it’s not popular.”