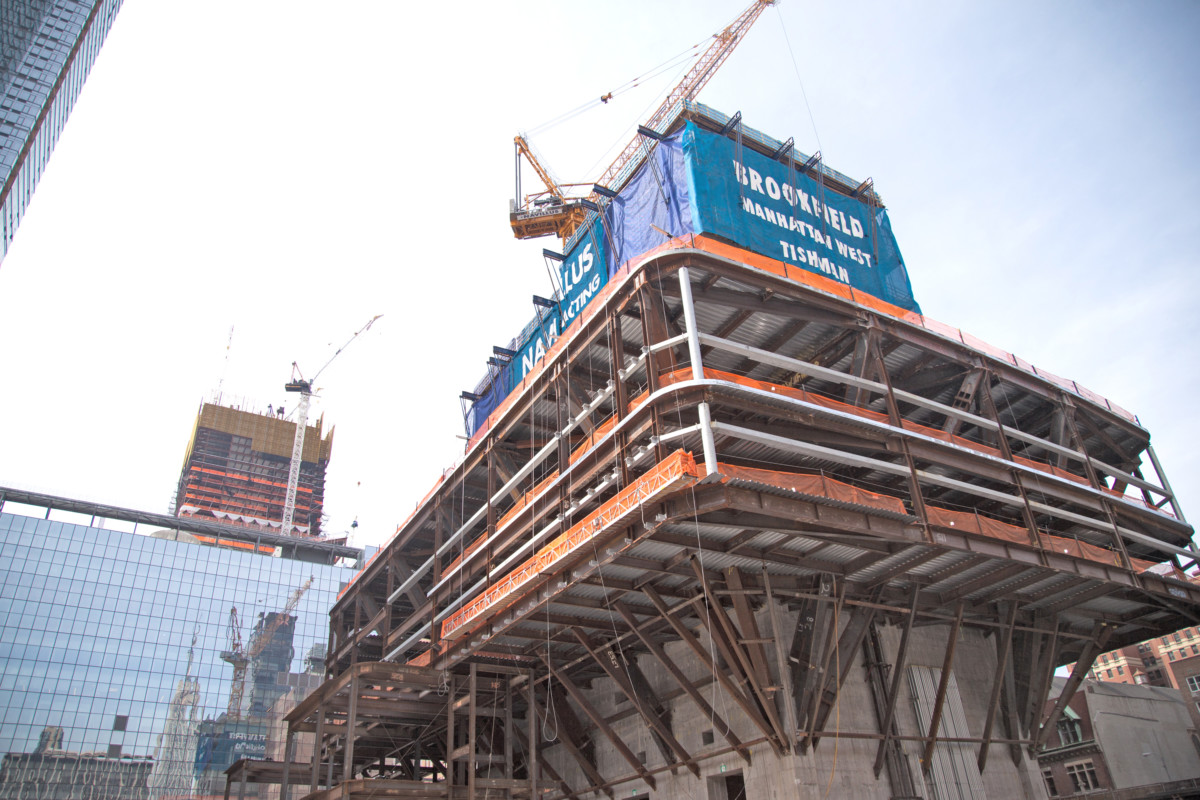 The pieces are starting to come together at Manhattan West, where Brookfield is working to create a whole new Manhattan neighborhood.

Once competed, the site will have six new towers, over seven million s/f of mixed-use space, including office, residential and retail, a hotel, and public space.

One Manhattan West, a 72-story building is now rising and expected to be finished in 2019.

On a recent tour of the site, construction had reached up to the 12th floor, branching upward from a dramatic cantilevered base.

It is the tallest building contractor, Navillus, has built in the company’s 30-year history. However, that will change when Navillus begins construction on SL Green’s One Vanderbilt, slated to begin some time this month.

Donal O’Sullivan, the CEO of Navillus, said the building is one of the most unique he has worked on in his career. He called the cantilevered base a “first-of-its-kind” and one of the largest his firm has worked on.

While every building has its challenges, One Manhattan West has a particularly interesting one; it’s being built over active rail yards.

The site sits over the Penn Station railways, so a platform above the active infrastructure had to be completed before they could build. In addition, the cantilevered base requires more support than a traditional office building.

“This building had a lot of challenges up to the sixth floor just because of the amount of reinforcement that’s needed down low to support it, especially when it spans out like that,” said O’Sullivan.

The core of the building, what O’Sullivan calls “the brains,” is one of the largest in the city, with the exception of One World Trade Center, he said.

Construction is on track and slated for a 2019 completion, though O’Sullivan and his team hope to finish ahead of the schedule.

Of the six planned Manhattan West buildings, two are existing structures that will be repositioned. The site will have over two acres of open space.

Because of the scale of the project, construction is separated out into about nine phases, not including tenant buildouts. The first step, of course, was building over the 15 rail lines that go in and out of Penn Station every day.

“That really set the stage for us to start executing buildings,” said Henry Caso, senior vice president of construction at Manhattan West.

“We want to maintain that aesthetic and not overwhelm the area with new buildings,” said Caso. “We want to keep some fabric of the neighborhood.”

The Southeast tower, or Two Manhattan West, could be delivered as early as 2022. Excavations begin this summer on the building, which will be a “sister building” to One Manhattan West. The final remaining building is 4 Manhattan West, the hotel portion of the project. The team has already poured foundation for that building and will begin construction this fall, with an expected completion date of September 2020.

The corresponding two acres of open space will be completed in phases along with the towers. The open breezeway and Magnolia Court are planned to be opened after Memorial Day, marking the first open spaces to open to the public since development of the project began.

“The lion’s share of the open space gets delivered in December of 2019,” said Caso.

As far as office tenants go, law firm Skadden, Arps, Slate, Meagher & Flom is taking 550,000 s/f at One Manhattan West, and the NHL is moving its headquarters to 160,000 s/f in the building, and additionally leasing 15,000 s/f of retail space at the site. Those two tenants together represent about 60 percent of leasable space at the 2.1 million s/f building, said a spokesperson for Brookfield.

They were tight-lipped about tenants other than those already announced, however, according to published reports, JP Morgan Chase is close to signing at the building and Amazon is looking.